EN.DELFI
aA
The National Executive Committee of the Lithuanian-American Community, Inc. has chosen Philadelphia as the host city for the 16th Lithuanian Folk Dance Festival in 2020. Called “Šokių Šventė” in Lithuanian, this event is held every four years to celebrate the unique traditions of the Lithuanian heritage. Beginning in 1957, these festivals provided a way for Lithuanian immigrants and Lithuanian-Americans to keep their heritage alive while the Soviet Union occupied Lithuania during the Cold War. Now that Lithuania is an independent nation, these festivals are an essential part of celebrating Lithuanian traditions. 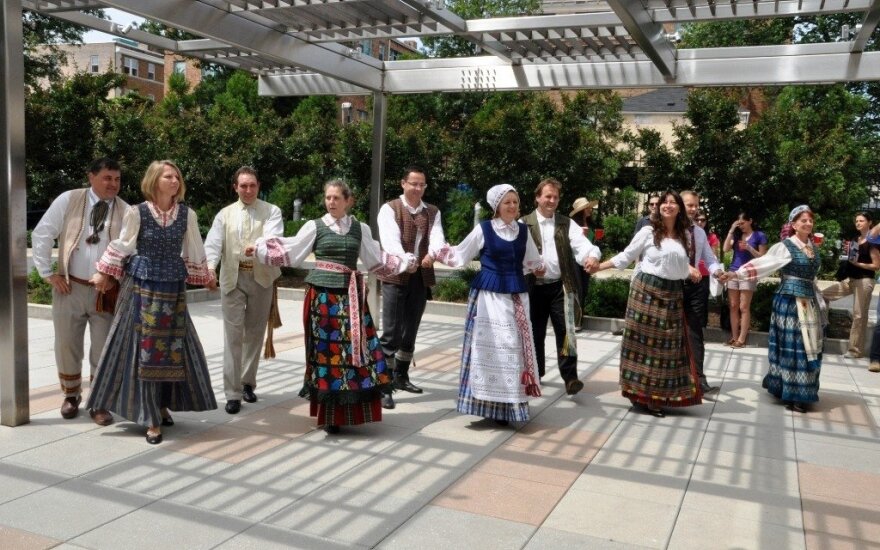 National dances at the Lithuania Embassy in the US
© URM

Nearly 10,000 people from around the world are expected to gather in Philadelphia for the 16th Šokių Šventė. During the 4th of July weekend, this festival will feature a series of banquets, art exhibits, and concerts in Center City culminating with a dynamic performance on Sunday July 5th, paying tribute to vibrant, Lithuanian folk dance performed in synchrony by nearly 2,000 dancers. Details on venues and accommodations are to come. The most recent Šokių Šventė was held in Baltimore on July 3rd, 2016, featuring over 1,800 dancers from 6 different countries.

Krista Butvydas Bard, Honorary Consul General of the Republic of Lithuania to the Commonwealth of Pennsylvania, commented:

"Our Lithuanian Dance Festival 'Šokių Šventė' is an internationally acclaimed showcase of choreography, costume design, and textile art, and holds special significance for this region. The very first Lithuanians came to the United States via Pennsylvania in the 19th century, and Philadelphia continues to be home to one of the largest and most active Lithuanian diaspora communities in the world, continuously working to strengthen cultural, educational, economic and scientific ties. In 2013, Philadelphia notably produced the largest Lithuanian festival in the U.S. since the 1939 World's Fair, including the largest Lithuanian artists' exhibition in the U.S. at the esteemed Philadelphia Museum of Art Craft Show. We look forward now to hosting the Lithuanian Dance Festival 'Šokių Šventė' in Philadelphia during the Welcome America festival. This country welcomed us, and we are honored to be a part of its rich heritage."

"Folk music and dance have always been a very important part of the Lithuanian culture and identity. We dance and sing from one generation to another, and it unites us into one, big family. In 2020, Philadelphia will welcome thousands from this beautiful family to dance, create new memories, and celebrate together."

About the Lithuanian-American Community, Inc.: The Lithuanian American Community, Inc. (LAC) has 52 local chapters in 27 states and the District of Columbia. Since its founding in 1951, LAC has sought to preserve the Lithuanian cultural identity for future generations. LAC is also in the forefront of fostering the growth of the democratic institutions of the country of our heritage and of assisting Lithuania in numerous other ways. Find out more at http://lithuanian-american.org/.

A few bridges and other objects in the Brazilian city of Sao Paulo will light up in the flag colours...

A Lithuanian flag that once flew over the Prezidentas Smetona, the first Lithuanian warship of the...

The map of Lithuanian heritage in the USA goes online

Do you imagine where in America the Mindaugas Castle is located? Where is the place Darius and...

President to open festival of Lithuanian culture in Rome

Lithuanian President Dalia Grybauskaitė is currently in Rome where she is set to open Lithuanian...