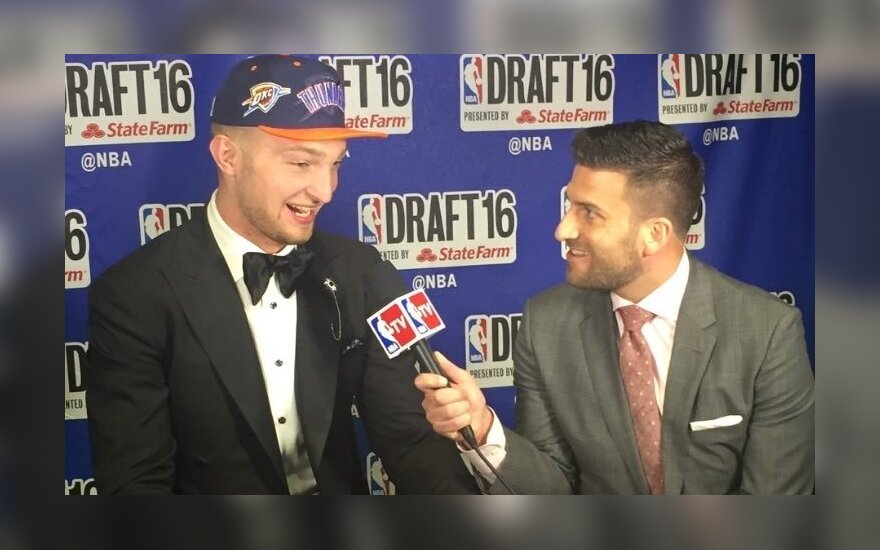 With the 11th pick of the 2016 NBA Draft, the Orlando Magic selected Sabonis from Gonzaga but they immediately traded Sabonis to the Oklahoma City Thunder for Serge Ibaka in the most eye-catching deal of the night.

Sabonis went earlier than his father, NBA legend Arvydas, did 30 years ago. The Blazers picked Arvydas Sabonis 24th in 1986 before his illustrious career in the NBA.

Orlando also sent Victor Oladipo and Ersan Ilyasova to the Thunder as part of the trade for Ibaka. Sabonis with team up with Durant and fellow OKC NBA star Russel Westbrook in a potentially mouthwatering line-up.

SB Nation reported that a key reason for Sabonis Jr, son of Lithuanian NBA legend Arvydas, going so high up in the draft was his performance against fellow draft prospect Jakob Poeltl of Utah in the second round of the NCAA
Tournament where he completely outplayed the Utah big man.

Related articles
‘My goal is to be the first Lithuanian NBA champion’
Who has Domantas Sabonis picked as the team he wants to play for in the NBA?

Sabonis had 19 points and 10 rebounds, while Poeltl struggled with only five points and four rebounds despite being rated as one of the draft’s highest picks up to that point.

“It was a big-time performance from Sabonis, who appeared to relish the opportunity. While not known as a shut-down defender, he worked hard to hold Poeltl at bay,” said SB Nation.

Domantas Sabonis , son of Lithuanian NBA legend Arvydas , has indicated a clear preference for the...