www.DELFI.lt
aA
On Wednesday, July 2, Vilnius city filled up with jolly uproar – tens of thousands of performers from Lithuania and 14th foreign countries ready to present the beauty of Lithuanian songs and dances will gather here. The organizers of the event note that each song festival enjoys growing attention of emigrants. More and more fellow-countrymen want to contribute to this event every year. 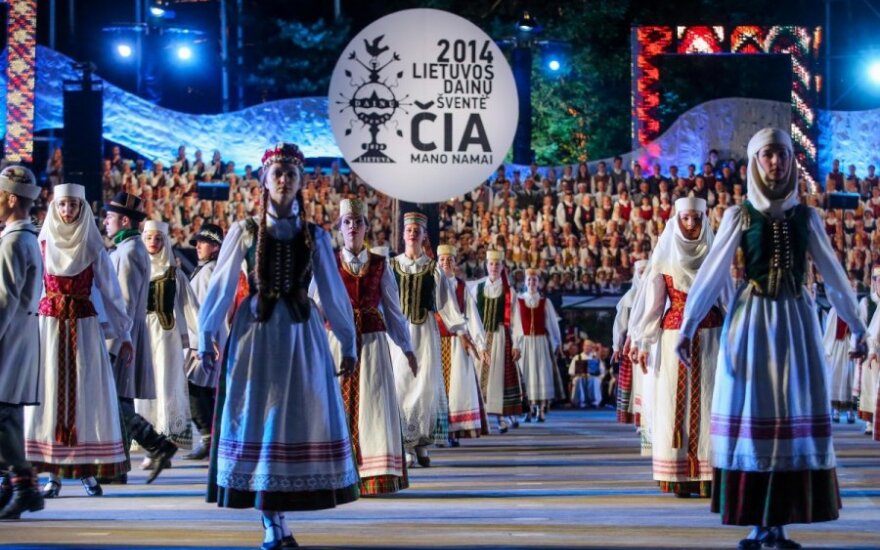 The very first week of July will be flooded with the 12 programs which have been being prepared for 4 years and which will present the national arts, new programs as well as ideas: events of Theater Day, National Costume Day which will be commemorated for the first time and the collection of the costumes of the Baltic tribes which has been reproduced specially for the Song Celebration and for which the a theatrical spectacle in the Grand Dukes' Palace will be dedicated to.

On Tuesday, the detailed program of the festival was presented in the Lithuanian Folk Culture Centre.

"Culture, history, customs, dances, songs are the roots of the nation. We have just hoisted the flag of the Song Celebration which announces that the Song Celebration has started," said Šarūnas Birutis, the Minister of Culture of the Republic of Lithuania. "The Song Celebration is not only dance or song but the deep tradition creating the feeling of community as well. This event is the most significant cultural event connecting people. Let us enjoy the best we have – our music, dances and songs," added Š. Birutis.

Opportunity to present oneself

Saulius Liausa, one of the organizers and the director of the Lithuanian Folk Culture Centre, rejoiced at the successful organization of one of the most significant cultural events in the country. According to S. Liausa, all institutions focused on the teamwork. Therefore, the results were gratifying. However, the creator of the Song Festival regretted that the state's attitude towards the culture remained negligent.

Director of the Lithuanian Folk Culture Centre rejoiced that the event celebrating the 90th anniversary was expanding every year and not only song or dance but the theaters, traditional folk crafts and the exhibition of the folk art found a place in it.

Valentinas Masalskis, the director of the opening concert and the Theater Day, told that he tried to avoid pomposity in the opening event.

"We wanted to eliminate the gap between the performers and the audience. As a result, everyone will be invited to sing. All music genres will be touched – from church music to sung poetry," said V. Masalskis.

People will be able to clap eyes on nearly half a thousand theatricals who have been talking in the words of Kristijonas Donelaitis for a year and half in the event of Theater Day.

Ensembles' Evening, one of the most impressive events, is preparing the exclusive show for the audience which will tell the story of different country's regions through Lithuanian rivers.

"Those who will come to the Folklore Day will be able to visit the House of Happiness," said Vida Šatkauskienė, head of the creative group responsible for organising Folklore Day.

During the Folklore Day, more than 4 thousand of performers (folklore ensembles, singers, musicians, tellers, folk art and crafts masters, specialists of traditional meals, the preservers of the customs and health knowledge and others) will invite people to recognize the forms of happiness through concerts, trainings, talks and games.

The visitors of the Folklore Day will have an opportunity to remember or to learn how to tame happiness and not to let it from one's hands, how to attain success in one's personal life, family, households, how to welcome a baby, how to act during the rituals of wedding and housewarming, what customs to follow during the annual holidays and how to preserve the well-being and to avoid the misfortunes.

Number of returning emigrants is increasing

Agnija Šeiko, the director and chorographer of the Collection of the Costumes of the Baltic Tribes, highlighted that this event was not to be simple presentation of the costumes. This was to be a theatrical event taking the visitors to the ancient times.

56 costumes of the Baltic Tribes will be presented during the presentation of the costumes of the Baltic Tribes of I-XIV c. The event will be "decorated" with the prominent country's performers: saxophonist Petras Vyšniauskas, percussionist Arkadijus Gotesmanas, choir Brevis, Chamber orchestra of Vytautas Magnus University, brass quintet, actor Vaidotas Martinaitis and modern dance dancers Auša Krasauskaitė, Darius Berulis, Mantas Stabačinskas, Marius Pinigis, Petras Lisauskas and others.

Vidmantas Mačiulskis, the head of the creative group Sodautas of the Dance Day, noted that this year's event was to be attended by 7.5 thousand dancers. The majority of them – foreigners.

"The emigrants used to come from America, Canada and Uruguay. This year is special because the new wave of emigrants from Sweden and England has sprung. We hope that in the future the collectives from Ireland and other countries where our young generation has emigrated will show up in this event," said V. Mačiulskis.

Vytautas Miškinis, the head of the creative group of Song Day and chief conductor, also said that the interest of emigrants was increasing every year. However, not all delegations had the opportunity to receive the invitations.

"Very often we are compared to Latvia and Estonia. However, they do not have such great number of the performers of the song celebrations that we do. There is no other place like Lithuania. Usually, applause comes after an event but I would like to give a clap beforehand. This year, we were probably the first to start preparing for the Song Celebration. The planning of the repertoire has started 3 years ago. It should cater for all tastes. We satisfy the musical tastes of the elderly as well as the youth. This is what makes us different from Latvians and Estonians," told V. Miškinis.