New York‘s ultramarathon – beneath the feet of a Lithuanian fireman 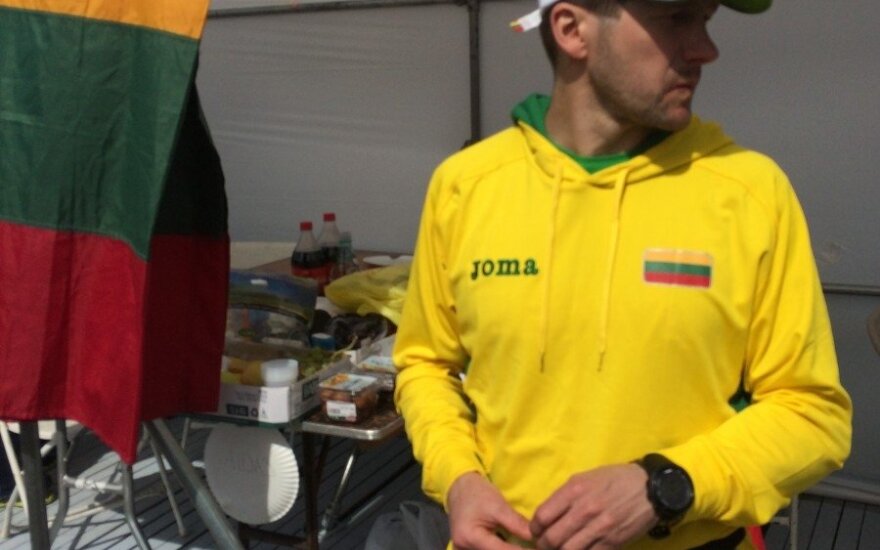 Aidas had a really strong start. The very first day he ran 86 miles. He attempted to keep the same pace on day two as well, despite the heavy downpour and enormous winds. Eventually though, the bad weather took its toll on Aidas and put him behind with a few injuries. Due to the swelling in his right foot, Aidas tried to favor it by putting more pressure on his left leg. That, however, resulted in excruciating left knee pain. There were moments when the runner thought his race might be prematurely over... He was forced to reduce his speed and change his strategy thus allowing his body to get more rest. Competitors took advantage of the situation and by day three Aidas had fallen down to the eleventh place. It took enormous strength and determination to continue the painful fight. On day six the stress and injuries forced the Czech runner Atmavir Spacil out of the race; Atmavir was leading the pack at the time and was considered the favorite to win it all. Although he had successfully completed seven 3K+ miles ultramarathons in the past, at Flushing Meadows Corona Park he managed to take a mere sixteenth spot.

Aidas gained great benefit from the experience and advice of a fellow Lithuanian Rimas Jakelaitis who holds multiple ultramarathon trophies and records. Rimas, currently residing in New York, made a last minute decision to enter the 6-day race after finding out about Aidas‘ participation. Back in 2001, Rimas completed this same Sri Chinmoy race and achieved the record of 901 miles; he continues to hold the record to this day.

Systematic approach enabled Ardzijauskas to rise from the ashes and attack the race. He kept increasing his distance with every remaining day. On day six he achieved 62 miles, day seven – 70 miles day 8 – 77 miles and day 9 – 78 miles. The determined Lithuanian managed to make up for the lost time. On day 9 he caught up with Baladev Saraz of Slovakia and started to build up safe distance ahead of him. With 6 hours of the ultramarathon remaining on day 10, Aidas was 20 miles ahead of the closest competitor. There was no doubt who was about to become the winner of the race.

His final result – 667 miles! As Ardzijauskas emphasized to the American press after the race, he attributed the win to the team effort and support. Without the strong Lithuanian team behind him, Aidas would not have won the race or achieved the result he did. The runner expressed his sincere gratitude to all team members and especially to Rimas Jakelaitis, who not only ran the 6-day ultramarathon but also became Aidas‘ coach, trainer and strategist. Aidas also thanked the local Lithuanian community members Valdas and Aušra Buožiai as well as Lithuanian Athletic Union of North America Chair of the Northeastern region Deivis Pavasaris, who hosted and took care of him during the race and his visit to US this time.