Never ever give up! The story of American-Lithuanian football legend Johnny Unitas-Jonaitis

Ludo Segers | the Lithuania Tribune
aA
In the late 1940s, a substitute teacher in St Justin’s High School, a Catholic grade school, was asking students about their career goals. Much to her surprise Johnny Unitas said that his ambition was to become a professional football player. 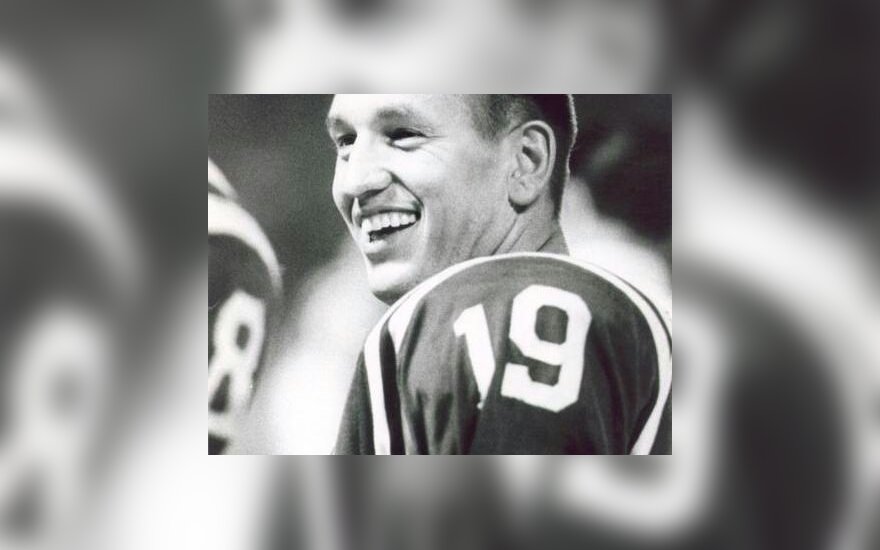 The young boy attending middle school in the Pittsburgh suburb of Pennsylvania played halfback and quarterback in the school’s team. With 1, 85 m (6ft 1’) he was tall, yet by general consent too skinny to be an athlete and to make it in the professional football league, weighting only 66 kilo (145 lbs). That stature did not hinder him and eventually quarterback Unitas became known as the best in a league that consisted of teams from smaller schools. Now he is widely acknowledged as the greatest quarterback that ever played American football and an achievement that must have been beyond the boy’s wildest dreams when he made that statement in class. Unitas would never ever let setbacks impede on his dreams. His dedication and perseverance would turn him into a role model and inspiration for a generation of players. 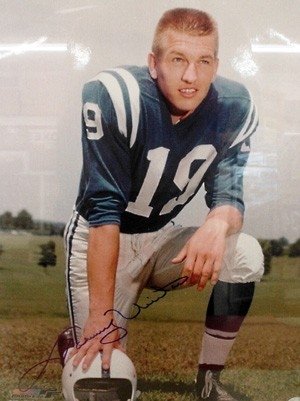 Johnny Unitas is remembered as a quiet, shy, and athletic young man, mainly practising sports. Johnny’s father had a good job operating a coal delivery service. That allowed the family to live in a new house in one of the better neighbourhoods of Pittsburgh. Life changed dramatically when the 4-year-old boy’s father died. There was no money left, nor was there life insurance and his mother would often hold two jobs to raise a family of four.

While helping his siblings in the family business, Johnny completed high school. The family had no money for tuition and Johnny applied for a sports scholarship at the famous Notre Dame University. He was turned down, more for his looks than for lack of talent. He was again turned down in his hometown after writing a poor academic test.

During his first year in Louisville Kentucky, Unitas very quickly established a reputation as an excellent quarterback. Prior to his second year there, Louisville reduced the emphasis on sports and that substantially affected the university’s football team. Johnny was one of the few players allowed to stay in the university. He became an outstanding player in spite of his team losing a record number of games. In 1954, he would become team captain, yet in his last year he would not see a lot of action due to an injury.

After his graduation in Louisville, the Pittsburgh Steelers of the NFL drafted Unitas. Selecting him in the ninth round, it did not offer a bright prospect to make it on the team rosters. During training camp, the Steelers’ head coach judged that Unitas was the odd man out among four quarterbacks in his attempt trying to fill three spots. He saw Johnny as not smart enough to be quarterback on an NFL team. 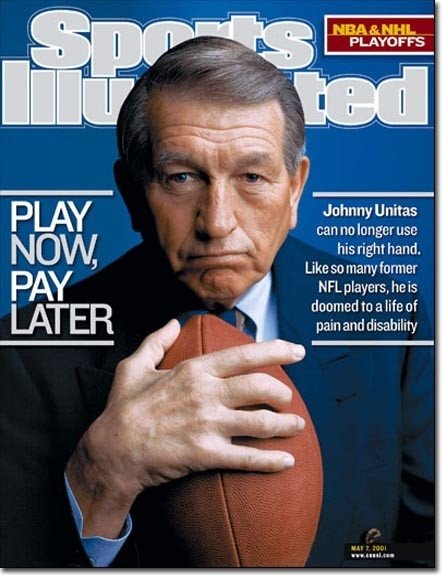 In retrospect, that must have looked like a gigantic error. Having just married his high school sweetheart, Dorothy Hoelle, he found himself working in construction to support his family. In addition, during the weekend he also earned $6 a game playing for the semi professional Bloomfield Rams in Pittsburgh.

Johnny’s best hopes rested in an upcoming NFL draft. There was a promise from the Cleveland Browns that he would be invited to training camp in 1956, but that was still some time away. Unitas still had his inborn confidence and unadorned appearance that would later define him to generations of football fans. For now, the man of few words lived very modestly. He had a small group of appreciative fans, but his prospects looked far from bright. All the same, his dream never wavered, something only his very close family was able to see.

What happened next has been shrouded in some mystery. According to Joe Unitas, Johnny’s son, the Bloomfield Rams’ owner Chuck "Bear" Rogers, who was also a player with the team, had a major hand in advancing Johnny’s career. Rogers’ wife, Roberta, wrote in February 1956 a letter to the Baltimore Colts hoping to get a try-out for Jim Deglau, a tackle on the Rams’ team. Don Kellett, the Baltimore Colts’ general manager, called Chuck Rogers and invited Jim Deglau for a try-out.

During that same conversation, Kellett also asked Bear if he had ever heard of a guy named Unitas. Rogers said ‘Yes, he plays for us’ and gave Unitas' phone number to Kellett. In turn, Kellett called Johnny Unitas and invited him to come down for a try-out. In the spring of 1956, Unitas and Deglau headed for Baltimore. Johnny was invited back for training camp that summer.

Johnny got the job wearing the now famous ‘19’ jersey. And what a job that turned out to be! He quickly replaced an injured quarterback. In 1958, less than three years later, the Baltimore Colts were the NFL champion.

Unitas is regarded as football's finest quarterback ever. He achieved that in less than five years after joining the Baltimore team. In the process, Unitas set records that stood the test of time for decades and propelled football into a major sport in the USA. The fans back home were thrilled! Few in Mount Washington had believed that this slender, unassuming young man would make it all the way to the top. Of course, Unitas had become a very different player but he remained the same tough and accurate player that he always had been through high school and college. The quiet and skinny lad that grew up fatherless, shovelling coal and hanging in by playing in a B league, after attending his third choice for college, had become the biggest star of his day in the NFL!

Already in the 1960s, Johnny Unitas’ fame had entered him into popular American culture. In 1963, during the Papacy of John XXIII, the Second Vatican Council dealt with potential divisive issues in its way forward for the Catholic Church. One of the jokes about Pope John XXIII at the time was "Johnny Unite Us!"

Numerous books have been published about ‘Number 19’ Johnny Unitas. Tom Callahan wrote the critically acclaimed authorised biography. Johnny’s son Joe has written a movie script based on that book. The movie is now in the early planning stages. More about that project in part II. 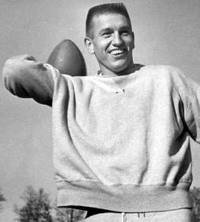