aA
On 16 February 2015, a concert was organized by the Embassy of Lithuania in Sweden in order to commemorate the Restoration of the Independent State of Lithuania. The concert took place in Oscar’s church. 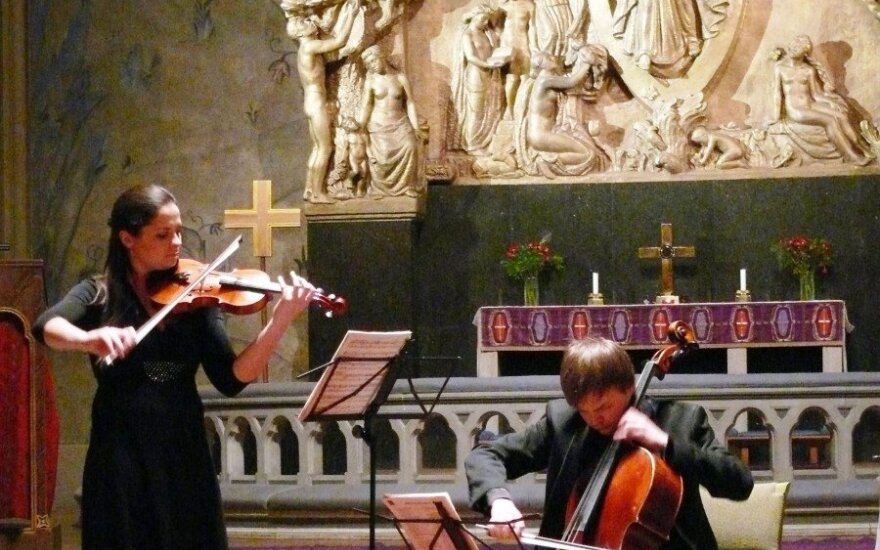 Lithuanian Ambassador to Sweden Eitvydas Bajarūnas delivered a word of welcome by congratulating everyone and by stressing the importance of this date for Lithuania.

"Independence Day is a great occasion to remember one's origins and to look back at the most fundamental events of our history. This is a special year because we are celebrating the 25th Anniversary of the Restoration of the Independent State of Lithuania. Sweden was among the first ones who recognized Lithuania as a free independent state on 12 December 1918. Since then the relations between Lithuania and Sweden, especially cultural and economic ones, were developing rapidly. In 1919 Lithuanian Embassy was opened in Stockholm and Lithuanian press office started its work. And today we are interested in developing even further and closer mutually beneficial relationship with Sweden."

"Remembering its own long and complicated road to Independence Lithuania understands that today Ukraine fights not only for its independence but for the peace all over the Europe as well, so we back and support the country’s right to determine its own future," said the ambassador.

Ambassador highlighted that it is symbolic that on 16 of February we also celebrate and the approaching 25th anniversary of the Restoration of Lithuania's independence and noted that the Speaker of the Swedish Riksdag Urban Ahlin will take part in events commemorating the 11 March Restoration of the Independent State in Vilnius.

Numerous guests that included Swedish politicians, public figures, diplomats and the representatives of Lithuanian community in Sweden enjoyed the concert of a Lithuanian string instrument duet - violinist Dalia Dedinskaitė and cellist Gleb Pyšniak – that performed vivacious works of both Lithuanian and foreign composers.

On 17th February the Independence Day will be celebrated in city of Västerås by Lithuanians who come from Västmanland region as well as representatives of Lithuanian embassy in Sweden.

11th of March, the day of the Restoration of the Independent State of Lithuania, will be celebrated in other cities as well. On 9th March special events will be organized in Jonköping. With the initiative of honorary consul Gunar Lans, the representatives of Alytus region will take part in this commemoration. Regional politicians, business and culture representative will also come to honour the national celebration of Lithuania.

Commemoration on 11 March in Stockholm is being organized by the Lithuanian community in Sweden. A Lithuanian film "We will sing" will be screened at the event. On the same day in Halmstad, with the initiative of honorary consul Evert Grahn, an event for the commemoration of the Restoration of the Independent State of Lithuania will take place. Some other events are planned in Malmö, Kristianstad and other cities. Lithuanian Ambassador Bajarūnas will be present at these events in Stockholm, Jonköping, Halmstad and other cities.