Rory Kelleher, the Lithuania Tribune
aA
Drama Burger’s sizzling reviews continue to pile up as high as its burgers after the Lithuanian burger chain opened its first US restaurant in Tampa, Florida. 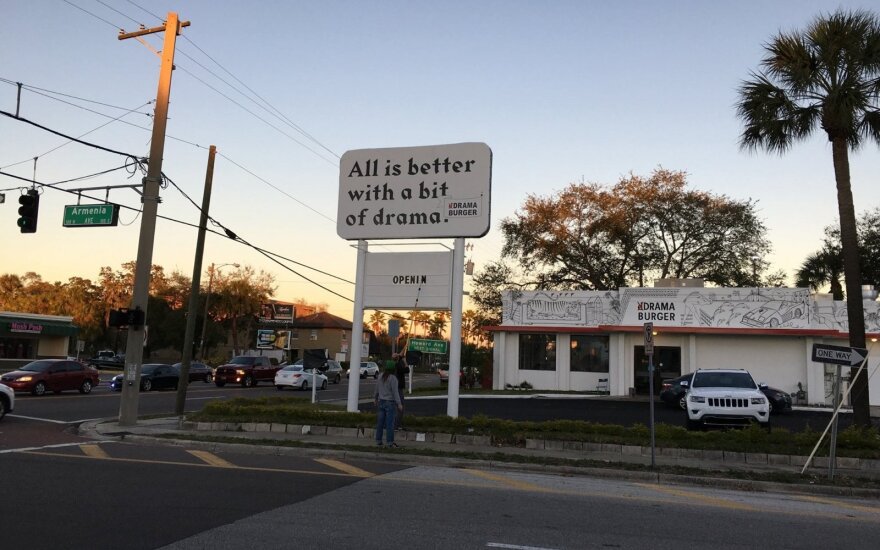 Tampa Bay Tribune food critic Laura Reiley welcomed the “Lithuanian invasion” saying in a review: “I welcome the invaders with open arms, despite a long-time vow to court less drama in my life. Evidently, these successful restaurateurs fell in love with the Tampa-St. Petersburg area while on vacation, smitten with our craft beer scene and our grass-fed beef. And so the Lithuanian invasion began”

But it wasn’t a burger but a housemade pastrami sandwich that most caught her attention: “The single best sandwich isn't a burger at all,” Reiley writes, “It's the thin-sliced housemade pastrami ($10.99) piled onto a glossy, soft brioche bun with a spicy house mustard-mayo, thin curls of red onion with some snap, and tangy herbal pickle slices. The meat itself is the star, the swaths soft but not stringy, with a discernible smokiness. Its preparation takes about a week, with marinating, then cold smoking, then boiling gently for days to get the texture just right.

“The second best sandwich is the burger upon which that pastrami has hitched a ride. I couldn't quite envision the successful union of ground beef and pastrami, but clearly my imagination is limited. The bounciness of the beef, the plushness of the pastrami, a little smokiness, a little juiciness — it's worth its $12.99 price tag.”

The Tampa Bay Tribune food critic was also complimentary of the ambiance of the new restaurant complimenting it on its funky décor and “cool” Lithuanian music.

She also felt the echoes of the food’s Lithuanian origins: “We tried all three potato options — skinny sweet potato, fat Belgian twice-fried planks and skinny skin-on rustic russets — and all were good. They were offered with house-made truffled ketchup and mayo just different enough that you might have a moment's reverie about what life in Vilnius is like. It feels American, but with a hard-to-place accent,”

“There are Drama dishes that some folks will shrink from (the nearly medicinal ginger caraway lemonade, the crunchy black breads sticks with a blue cheese dipper), but most of the novelties will make you wonder why other hamburger concerns don't follow suit. Still-crunchy harissa-blushed young carrots (salty, sweet, spicy) and snappy okra pods dotted with meaty bacon are perfect burger foils,” Reiley said.

If the positive reviews keep piling up, surely it can’t be long before Lithuania’s leading burger aficionados take their drama to other American cities.

Lithuania’s Drama Burger has officially launched its first restaurant in the United States to...

Vilnius hamburger restaurant Drama Burger will launch in the US market this month, opening an outlet...