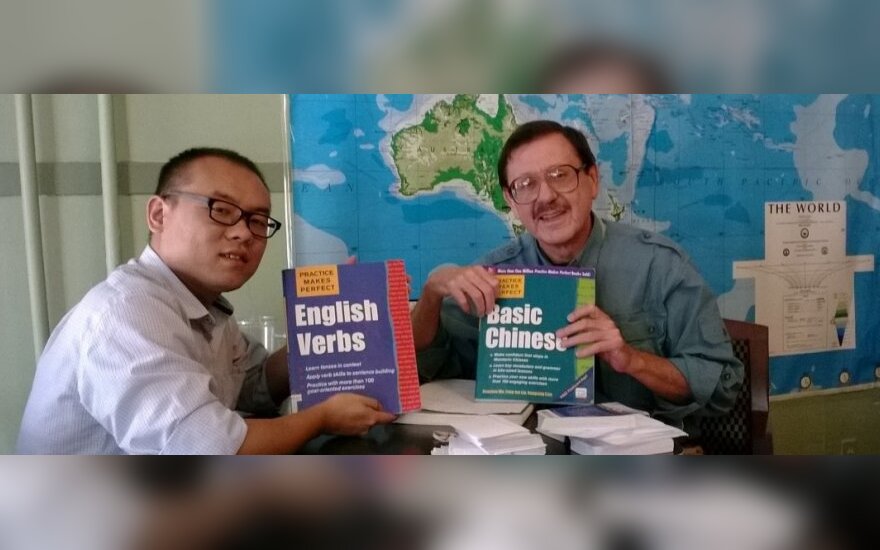 Most Westerners believe that learning to speak Mandarin Chinese is extremely difficult. When my friends found out that I wanted to learn conversational Mandarin Chinese, all but one said, “Impossible!”

Not so! While learning to read and write traditional Chinese characters poses an enormous challenge for non-native speakers, learning to speak conversational Mandarin Chinese is far easier. And there are many excellent reasons to learn spoken Mandarin Chinese.

First, it is the most widely spoken language in the world. With over a billion speakers, Mandarin Chinese outranks English by a margin of two to one. Also, the Chinese economy continues to grow at a fast pace with both trade and tourism booming. Proportionally, Chinese tourists topped the list of big spenders during last year’s festive season in Lithuania.
Interest in Chinese language, culture, and history is growing among Lithuanian young people with courses offered at the University of Vilnius’ Confucius Institute. Likewise, Chinese students are leaning Lithuanian in Beijing.

Whether you’re Lithuanian or a person of Lithuanian descent, seriously consider learning basic conversational Mandarin Chinese. Like me, you may be delighted by how much easier it is than you thought.

One look at traditional written Chinese characters can scare away even the most intrepid learner. The average literate Chinese adult knows from three to four thousand characters. However, you don’t need to learn any characters if your goal is to carry on a conversation in Mandarin Chinese.

Unlike the Japanese, the Chinese have developed a phonetic alphabet, which like English and Lithuanian, is based on Latin. The Romanized Chinese alphabet is called Pinyin.

In Pinyin words are spelled exactly as they are meant to sound. When learning Chinese using Pinyin, you won’t encounter non-phonetic words like ocean and television that can baffle learners of English. For example, in Pinyin the Chinese word for television is spelled dianshi. This is a compound word composed of two syllables dian, which means “electric” and shi, which means “vision.”

Mā ma, the word for “mother,” is pronounced just like in Lithuanian and English. The straight line above the vowel ā indicates that the first syllable is pronounced using the first tone (spoken flat).
There are four tones in spoken Mandarin plus a neutral tone. This does pose a minor obstacle for beginning learners. After all you don’t want to refer to your friend’s mother as Mǎ ma, because then you would be calling her a horse. The mark above this ǎ shows you that the tone of your voice should fall and then rise back to where you started.

With practice, you will learn the Chinese tones. In both English and Lithuanian, we use tones to express emotion. The Chinese also use them to express meaning.

If you do use the wrong tone, don’t worry. In most instances, your meaning will be clear to Chinese speakers from the context of your conversation.

The Gift of Chinese Grammar

The Chinese language has one of the easiest grammars in the world. Basic Chinese sentence structure is simple and straight forward (subject + verb + object), almost a mirror-image of basic Lithuanian and English sentence structure.

The greatest gift of Chinese grammar, however, resides in its nouns and verbs. When learning Chinese, you can forget about verb tenses, case declensions, plurals, articles, and genders. They just don’t exist. So instead of having to learn such words as went, am going, were going, have been going, and so on, a simple “go” will do just fine.

How do you indicate the past tense? Easy! Just say, “Yesterday I go Beijing.” Anyone who has studied German, French, Russian, or even Spanish will find Chinese grammar refreshingly simple.

You don’t have to struggle with learning words with many syllables like “refrigerator,” “irresponsibility,” or “chrysanthemum.” Just over 70 percent of Chinese words are made up of only one or two syllables. For example, the Chinese word for the word “refrigerator” is bingxiang. The word for “chrysantimum” is juhua.

Furthermore, many Chinese two-syllable words are meaningfully related, making them easy to learn once you know their monosyllabic parts. Thus, binxiang literally translates into “ice box.” As research in human memory and learning has shown, the more meaningful something is, the easier it will be to learn and remember.

1. Gather your language-learning tools. Having a good textbook with exercises that focus on grammar is essential. My personal choice is Basic Chinese by Xiaozhou We, Feng-his Liu, and Rongrong Liao, which I purchased online.

Additional supplies that you will need include: a two-way Mandarin Chinese dictionary, a phrase book, a set of index cards that you can use to create vocabulary flashcards, a notebook for writing down key words and phrases that come to your mind as important to learn, and a digital recorder.

The digital recorder is an absolute necessity, because it will allow you to record Chinese words, phrases, and even entire sentences that you hear on the internet or from a native Mandarin speaker.

If possible, record in a way that requires you to hear a word in Chinese and then repeat the English or Lithuanian equivalent during a pause before the next word. For example, say the word “friend” into your recorder, count five seconds and record the Chinese word “pengyou.” You can record the correct Chinese pronunciation from the Google Translate website by looking up the word and clicking the speaker icon.

3. Find a Chinese conversational partner. Finding a native Mandarin Chinese speaker will supercharge your learning. Not only will you learn how Chinese people speak during casual conversations, you will learn about Chinese customs and etiquette. I was astonished at how many similarities I found between Chinese and Lithuanian customs.

Having a Chinese conversational partner will motivate you to continue if your initial enthusiasm lapses. You may also find a new friend – someone who may serve as your host should you visit China. Of course, you will be expected to reciprocate should your Chinese friend visit you.

You can team up with a native Mandarin Chinese conversational partner through websites like “Conversation Exchange (www.conversationexchange.com). If you live in a city like Chicago, London, or Toronto, you will find many Chinese who are willing to have face-to-face conversations and learning sessions with you. If there aren’t any native speakers where you live, you will find many living in China who want to learn your language while you learn theirs through Skype.

As you get to know each other, create a list of learning goals to suit each of your personal needs. You can start by asking the question: “What things can I do to improve Mandarin Chinese language skills.”

Then brainstorm a list of ideas, choose one or two that seem promising, and try them out. Review and update your learning goals as you progress.

4. Not a day without learning! One missed day easily leads to another, and soon you find that you have forgotten many of the words and phrases that you have learned.

The best way to avoid this is by studying in brief sessions of 20 and 30 minutes. If you do this twice a day, you will be amazed at the progress you make. Carry your flashcards and digital recorder with you and make use of those times when you are waiting for an appointment. If you enjoy walking, you can use your digital recorder during your daily walks.

5. Learn Pinyin. Developed during the 1950s, Pinyin is the official phonetic alphabet used to write Chinese words in Latin script as this chart shows. 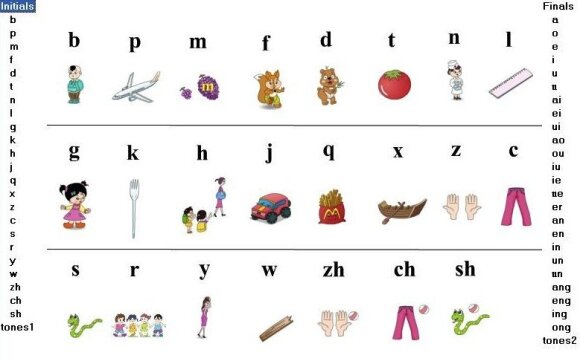 Although many of the sounds represented by the Pinyin alphabet are similar to those in English and Lithuanian, others differ. However, you can easily learn Pinyin in just three or four weeks with online language learning tools and videos.

6. Talk, listen, talk, listen. Begin creating sentences of your own just as soon as you have acquired a vocabulary of 75 to 100 Chinese words. The best way to build your foreign language vocabulary is in the context of daily life. If you have a Chinese friend or conversational partner, you can get started right away.

7. Create your own personal phrasebook. Every foreign language phrasebook I’ve seen is filled with sentences and phrases that you will rarely use. How often are you likely to say “How do I get to the airport?” in daily conversation?

By all means buy a phrasebook and learn any phrases and sentences on a “need-as-you-go” basis. But to really improve your conversational skills, use your notebook to create a phrasebook of your own.

Use your notebook to write down important words and phrases that come to mind during the course of the day. Choose phrases that you are likely to use often such as:

“I am happy to see you”
“Did you sleep well last night?”
“What do you want to do today?”

As you try to communicate in Chinese with a conversational partner or in real life, many more words and sentences will come to mind that require frequent use. Take the time to write these down in your language. Then translate them into Chinese using your own knowledge of Chinese grammar, your dictionary, and the Google Translate tool. Ask your partner to correct any errors you have made. After just a few months, you will be amazed at how many sentences you can translate without help.

Research indicates that learning activities we enjoy enhance learning. As social beings, we are genetically programmed to enjoy social interaction. An activity as simple as reviewing vocabulary with the use of flashcards is much more enjoyable when done with a conversational partner.

You can also find many Chinese language learning games online.

Better still, use the power of your imagination to create Chinese language learning games of your own. Role-play real-life situations with your conversational partner. For example, you can role-play a situation in which your partner pretends to be a stingy landlord and you pretend to be a tenant negotiating the rent. As a prelude, write down key words and phrases that are likely to occur during your dialogue.

So start learning Mandarin Chinese now, and above all, have fun.

Suggested Resources: To find the resources listed below. You can copy the titles in your Google Search Engine.