aA
A joint Indo-Lithuanian painting exhibition “Through My Friend’s Eyes” opened at the premises of the Lithuanian Embassy in New Delhi this Friday (April 10). 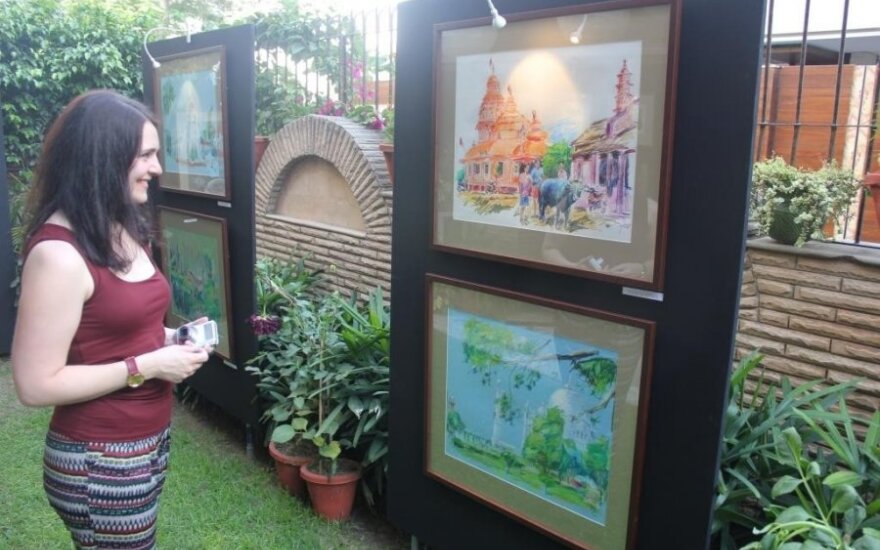 The exhibition showcases around 30 pieces of artwork by a Lithuanian Gintautas Vyšniauskas and an Indian Arijeet Chanda.

The exhibition showcases around 30 pieces of artwork by a Lithuanian Gintautas Vyšniauskas and an Indian Arijeet Chanda.

“The two artists represent two different worlds, both geographically and artistically. What they share, however, is their extreme sincerity and a talent of capturing and transforming in their own way the usual moments a foreigner would carry away on his camera memory card after a visit to India or Lithuania,” said the Lithuanian Ambassador Laimonas Talat-Kelpša during the opening ceremony.

“The joint exhibition invites us to measure up how these images, filtered through a foreigner’s friendly eye, match with our own perceptions of India and Lithuania,” said the Ambassador.

Gintautas Vyšniauskas (b. 1958), an architect and entrepreneur by profession, performs art only as has his leisure time activity. But he visited India along with his spouse, a famous Lithuanian journalist and social activist Edita Mildažytė, in the spring of 2013. Inspired by the country’s beauty, he produced a series of sketches of Indian landscapes and people, which were developed into larger complete works upon his return to Lithuania.

In his paintings, Gintautas portrays the people and situations from India with a powerful combination of warmth, affection, and love. He also seasons his artistic stories with a certain dose of self-irony, which is barely visual but unfolds in the context through such minor details as the name of the picture.

Meanwhile, Arijeet Chanda (b. 1975) represents the younger generation of Indian artists. His collection of 9 works includes the panoramas of the Old Town of the Lithuanian capital Vilnius, as well as Lithuania’s ancient capital, Trakai. But along he also displays a portrait of a book-smuggler, a man who would secretly transport prohibited books into Lithuania during the times of the Russian oppression.

“I have read on Lithuania almost everything I could find,” says the artist who himself has never visited the faraway Northern European country.

“I find Lithuania amazingly beautiful, but also I think that the ban of Lithuanian script under the Russian rule, and especially the nation’s peaceful struggle with it, is one of the most inspiring pages of the European history,” shares the painter.

Arijeet was doing a successful career in one of the multinational corporations until 2011, when he decided to quit and immerse himself in visual arts.

A self-taught painter, he was quick to earn public acclaim.

“All it takes is just one look at his paintings to feel serene, soothed and tranquil. Arijeet creates a magical world in the mind of a viewer, possibly because he has found his own peace of mind,” The Times of India reported in January 2015.

In August, the joint Indo-Lithuanian exhibition will move to India International Centre, New Delhi, where it will be presented to the national capital’s crème de la crème.

“Through My Friend’s Eyes” is already the eight visual arts event organized by the Lithuanian Embassy since 2013.