If not me, then who? Cleveland’s Lithuanians Plant 100 Birch Trees for Lithuania

Alexandra Kudukis
aA
If not me, then who? A question 50 Lithuanian- Americans asked themselves as they volunteered to plant 100 birch trees at the Cuyahoga National Valley near Cleveland, Ohio. 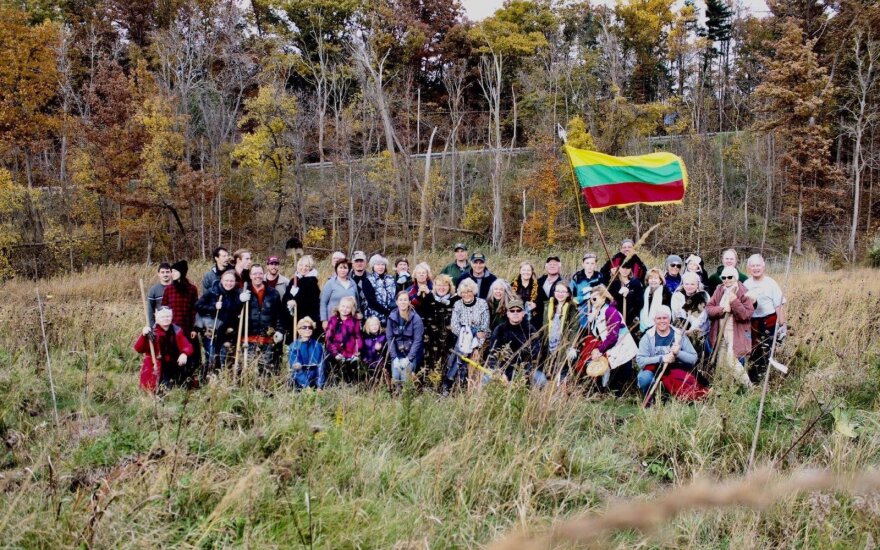 If not me, then who? Cleveland’s Lithuanians Plant 100 Birch Trees for Lithuania

Organized by the LB Cleveland, this event almost did not take place, after surveying the site, and considering the many huge potholes, general roughness of the terrain, as well as considering the forecast for inclement weather; the organizing committee had many reseravations. However, after careful consideration, and weighing in the outpouring of support the leadership committee received, it was decided to proceed as planned.

The group ranging in age from small children to senior citizens marched 800 meters uphill, armed with jackets, scarves and gloves, and shovels, these approximately 50 hearty souls marched though some difficult refrain, all uphill, to plant trees to commemorate Lithuania's 100 anniversary of independence.

Related articles
Contribution of volunteers to the budget of Lithuania - even 7.4%

The President of Cleveland LB, Algis Gudėnas, shared these thoughts "The Cleveland Lithuanian Community campaign to plant 100+ trees, I consider it an especially beautiful symbol celebrating the 100th anniversary of Lithuania... freedom, and collaborative efforts of those who love the culture, but live far from the homeland. This campaign brought many volunteers from our community to work,

So that we can enjoy these live birch forests for many years, maybe 100+ years from now, and our grandchildren will remember that we contributed to the celebratory year to commutate free Lithuania. I would like to personally thank Skaidra Kemkowska, for helping to coordinate this amazing event."

"The initial idea of planting 100 trees was suggested by Rasa Taraska, in collaboration with Skaidra, in commemoration of the anniversary of Lithuania's Independence, this heartfelt suggestion proved to develop into a truly meaningful event. Before we invited our community, we went to the proposed site to see what the location actually looked like. Truly and honestly, we were scared. The area has been deforested, and it really needed help to bring back the natural wildlife and to renew the earth. It seemed really hard to reach, remote, and the weather forecast promised a lot of rainy and chilly temperatures, the kind that make you want to snuggle in the warm blanket in, not plant trees outdoors. We even proposed calling off the event, but our community members confirmed that they would not easily abandon the purpose of planting trees for their homeland. The group gathered at the base of the hill looked at each other, and with fierce determination, trudged up that giant hill. We gathered with a good mood, and ready to work. It was very enjoyable not only to see those people who are normally active in our community, but also those who we don't always see. The friendly staff of the park helped us every step of the way, they honestly described the area and the complicated conditions. Proud to say, that our group stayed determined and felt firmly that-we can! The rays of the heating sun raised their mood. We divided into groups some carried trees, others dug holes. Anxiety melted like the morning clouds. Our spirits delighted in the light winds surrounded by a three-colored voice, the joyous sound- the voices of the community, cheerful beyond belief. The belief that our Cleveland Lithuanians are true patriots... this proved to be true. It is gratifying to know that we performed very meaningful work, which will not only commemorate the anniversary of Lithuania's centennial in 2018, but will help to rejuvenate a place where future generations will be able to come to see matured birch trees that the Cleveland Lithuanians planted to commemorate Lithuania's 100th centennial..."

Už Lietuvą- was a cry heard from several attendees, these heartly souls, who volunteered their time to be part of something bigger than themlseves, to contribute, to help, and to show their support to their brothers and sisters in Lithuania.

Contribution of volunteers to the budget of Lithuania - even 7.4%

Celebrating the International Volunteer Day we are pleased to announce that more people in Lithuania...