Ludo Segers ⎮ the Lithuania Tribune
aA
The history of the partisan resistance is an integral part of Lithuania’s resistance to Soviet-Russia’s aggression and still speaks to the imagination of most Lithuanians. The present situation of Russian aggression and warfare in Eastern Ukraine and the forceful annexation of Crimea have brought back dreadful memories to many in Lithuania. 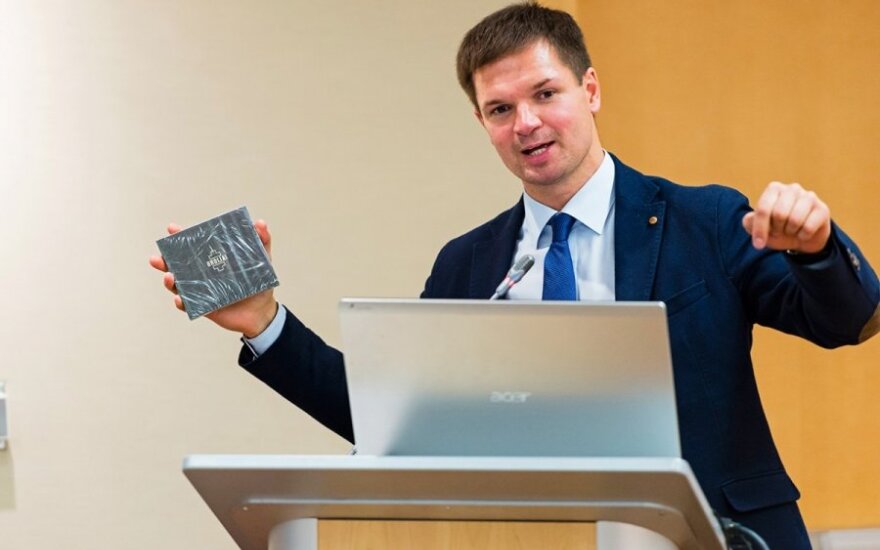 On 9 September Lithuanian’s Member of Parliament (Seimas) Paulius Saudargas, together with Laurynas Kasčiūnas and Linas Kojala presented the observations of their recent humanitarian mission to Ukraine to a large audience gathered in the Lithuanian Embassy in Washington, DC.

Ambassador Pavilionis articulated in the opening remarks his gratitude for this group of young people to visit Ukraine and his happiness to see young Lithuanians volunteering to help their fellow Ukrainians in the hour of need. ‘Value-based politics is often ridiculed in Lithuania, as well as in Europe, but the Ukrainian Maidan showed us once again what Europe can and should be.’

The Ukrainian Ambassador to the United States Olexander Motsyk also attended the event and he stated his gratitude for the ongoing support provided by the Lithuanian Ambassador and his diplomats. He thanked the Lithuanian government providing political support on the diplomatic site particularly as it integrates into the European and Transatlantic community. Ambassador Motsyk expressed his sincere thanks to the Lithuanian community, in the United States, for their strong support to Ukraine in these trying times dealing with the Russian aggression towards his home country.

Support to Ukraine is exactly what the group of young people set out to do in their recent mission. Dr. Paulius Saudargas, Lithuanian Member of Parliament (Seimas) explained that the partnership between anti-soviet Lithuanian and Ukrainian freedom fighters goes back to the years that followed the von Ribbentrop-Molotov pact. "Our two nations formed a core resistance against the Soviet Union’s forceful annexation after World War II,” he said "and through these historic ties we consider Ukrainians as brothers before and after annexation. These ties are extremely important in the current circumstances of Russian aggression in Eastern Ukraine."

Dr. Laurynas Kasčiūnas, analyst at the Eastern Europe Studies Centre, described how in early August, 2014 they organized in Lithuania a support campaign "Brother: Lithuania – Ukraine ’14". The goal was to help the pro-Ukrainian forces, in their fight against Russian backed terrorists and the separatist movements in Eastern Ukraine. They collected several thousand dollars during the campaign. The group distributed this in Ukraine in form of equipment and other necessities. The distribution was carried out as part of a youth expedition to Lviv in the western part of Ukraine.

Linas Kojala, the Director of the Centre for the Study of Traditions of Statehood, explained that this was a third expedition keeping up with a tradition of visiting important Lithuanian historic monuments in the former Soviet Union. In 2012, the group visited Krasnoyarsk and in 2013 Vorkuta, both located in Siberia. During these missions, they visited places where exiled Lithuanians had lived. They also engaged in historic discussions and exchanges with local communities. Mr. Kojala described how, following each mission, the group visited 100 schools in Lithuania to provide students with educational and historic facts.

An engaging exchange between several members of the audience unfolded and the three main speakers addressed the present Russian invasion of Ukraine and the possible threats it represents to Lithuania. Many in the audience also echoed sentiments questioning the readiness of Lithuania in face of the ongoing aggression and provocations. Monsignor Rolandas Makrickas, first secretary at Apostolic Nunciature of the Holy See in the United States, also attended. He reminded the audience during the question period that the defence of the homeland also requires people to be spiritually strong.

On 10 September, the group met with Congressman John Shimkus, chair of the Baltic group, in the American House of Representatives and other American politicians and political analysts. On Wednesday, the group travels to New York City for a number of meetings and events. Later this week the will also make presentations in Chicago.

Lithuanian MP: Russia's policies in Ukraine are in dead-end

Former CIA analyst: The fall of Putin’s Russia is a matter of several years

Though there is almost a feeling of euphoria in Russia over the aggression against Ukraine ,...

Would Russia be a different country without Putin? (1)

If Russian President Vladimir Putin were replaced by another politician in the Kremlin , Russia 's...