aA
On 18th September 2014, representatives of the British, Jewish and Lithuanian communities in the United Kingdom as well as Members of Parliament and foreign diplomats residing in London gathered at the Embassy to commemorate the Holocaust in Lithuania. 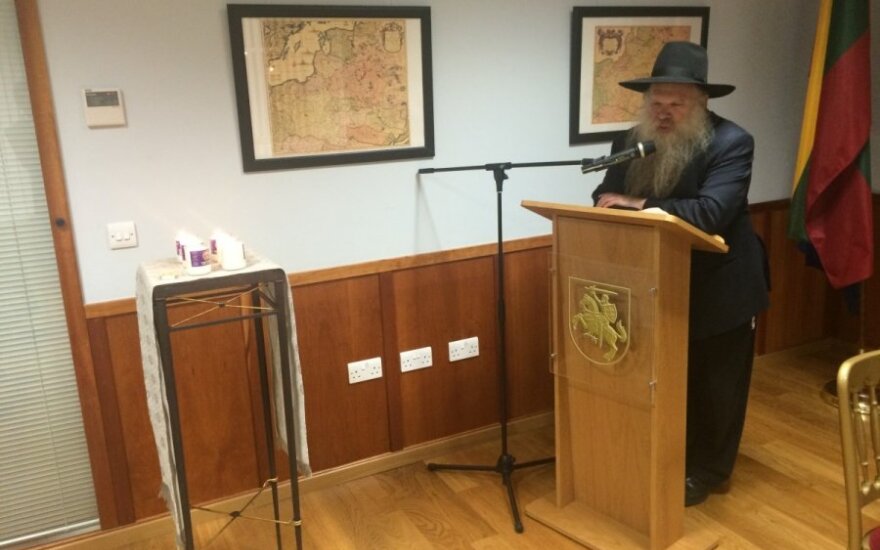 The annual traditional event dedicated to the victims of the Shoah included a concert of classical music performed by a String Quartet. It was followed by a commemorative speech delivered by the representative of the Board of Deputies of British Jews Alex Faiman and prayers led by Rabbi Herschel Gluck.

“We lost our Jews who had peacefully lived in Lithuania for more than six centuries. With them, we lost a very important part of the entire Lithuanian historical and cultural heritage. We lost the ’Yerusholaim di Lita’, the Northern Jerusalem”, the Lithuanian Ambassador Asta Skaisgirytė Liauškienė said.

The diplomat also emphasized the need to learn from the past and to ensure that the next generations of Europeans are thoroughly educated about the brutality of the 20th century. In this regard, the Ambassador stressed the importance of the long-term Holocaust remembrance and education projects.

Moreover, in the view of the diplomat, the commitment to the Holocaust victims, survivors and the rescuers of Jews must be upheld by the governments whose Jewish communities suffered during the Shoah. “Lithuania has successfully solved a number of complex post-Holocaust issues”, she noted. In this regard, the Ambassador referred to the Law on Good Will Compensation for the Immovable Property of Jewish Religious Community passed by the Lithuanian Parliament as well as to the assigned compensations to Jews who were repressed during the Soviet regime.

The Victims of the Holocaust in Lithuania are traditionally commemorated on the 23rd of September. On that day in 1943 the Nazis wiped out the Vilna Ghetto – the action marked the beginning of the end of the Shoah in Lithuania. The Kaunas and Šiauliai Ghettos were liquidated in the summer of 1944.

On the National Memorial Day for the Genocide of the Jews , President Dalia Grybauskaitė has...

Nobuki Sugihara, a son of famous Japanese diplomat Chiune Sugihara who saved thousands of Jews from...