the Lithuania Tribune
aA
Fiona Katauskas is a cartoonist and illustrator whose work appears in Australian national and State newspapers and magazines. She has illustrated a large number of books for many publishers; and for the past eight years she has been the producer of Talking Pictures – a segment of the current affairs program Insiders – which analyses the week’s political cartoons and is screened every Sunday morning on ABC1 and 24. 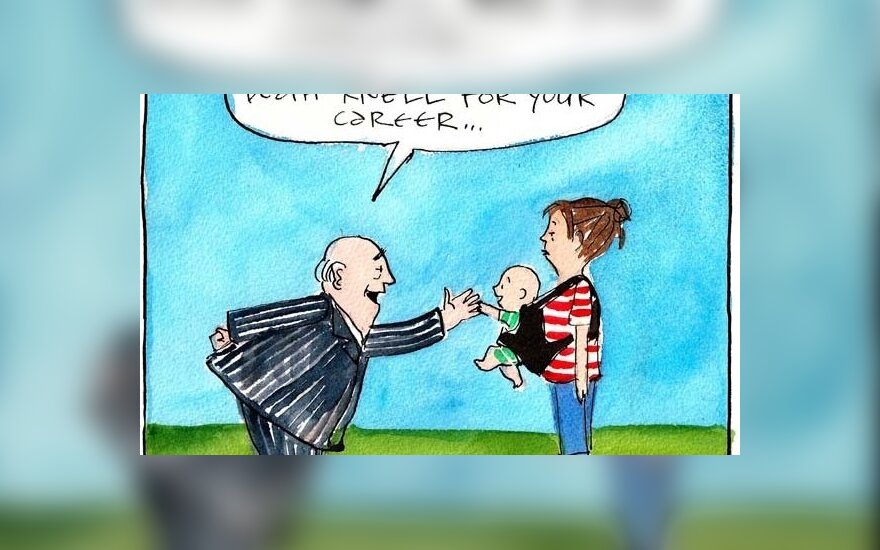 She is also often seen on TV, either hosting Talking Pictures or as a guest; and has been a guest panellist on ABC TV’s Q&A program. This feature on Ms Katauskas was originally published in Lapas, the official newsletter of the Brisbane Lithuanian community.

Fiona Katauskas was born in Sydney on 15 October 1969. Her father, Donatas Katauskas, was six years old when he arrived in Sydney in January 1949 with his older brother, Romanas, and parents, Pranas and Felicia (Uogintaitė) Katauskas. They arrived from Kaunas as refugees fleeing the Soviet invasion of Lithuania.

In Lithuania Pranas was a police officer and Felicia a midwife. After arriving in Australia, they settled down in Yarralumla, a suburb of Canberra in the Australian Capital Territory (ACT), where Pranas found work as a storeman and Felicia as a punch-card machine operator. 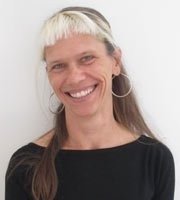 Fiona’s father, Donatas, an engineer, met Fiona’s mother, Jennifer Mall, a teacher and librarian from Sydney, when they were both living in Toronto, Canada, where they married. When they returned to Sydney, they settled down in the suburb of Wahroonga where they brought up three daughters; Fiona, the eldest, Emma, born eighteen months later, and Thea, who is five years younger than Fiona.

Fiona attended Warrawee and Hornsby Primary Schools and later Turramurra High School. She took drama and art classes and performed in a few local productions. She wasn’t into team sports but enjoyed running and walking and has fond memories of playing in the bush and going to the beach with friends and her sisters.

Growing up, they didn’t mix much with the Lithuanian community. Their mother was keen to learn Lithuanian and bring up the girls speaking it, but their father wasn’t enthusiastic so they were brought up speaking English at home. Fiona knows a few words in Lithuanian but wishes she could speak it. She is always keen to meet fellow Lithuanians and, like her Anglo-background mother, has a well-honed “Lithoradar” that enables them to spot a Lithuanian surname from 60 paces!

Fiona says she is always happy to do anything for the Lithuanian community and has given cartooning lessons to children at Sydney’s Lithuanian House during a Vasario 16-ta, or Independence Day, function. 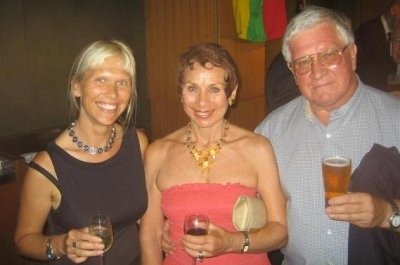 Fiona Katauskas (left) with a friend (middle) and her father Donatas (right) at an Independence Day celebration at New South Wales Parliament House.

In 1988, Fiona went to Charles Sturt University in Bathurst, NSW, to study broadcast journalism and spent her second year as an exchange student at Oregon State University in the USA. In an interview with Isolde Ira Davis published on the Sydney Lithuanian Information Centre website, Fiona said she became disillusioned with journalism so quit to study her real passion which was politics. So upon her return to Australia, she enrolled at the Australian National University (ANU) in Canberra, and completed an Honours Degree in International Relations. She then travelled extensively and worked for human rights and aid organisations in Indonesia, India, the Philippines, the USA and the UK. She continued to work for an aid organisation upon her return to Australia, until she was made redundant in 1996, which forced her to start thinking about a new career.

For years she had been sending friends homemade greeting cards and doing cartoons for organisations for fun and a friend suggested she take up cartooning for a living. Fiona had never considered herself an artist, but after some encouragement, put together a portfolio of her political work and sent it off to some newspapers and was greatly surprised when The Sydney Morning Herald published one of her cartoons in 1997. Things started to take off from there and Fiona found herself in a new career as a freelance cartoonist in a predominantly male profession. 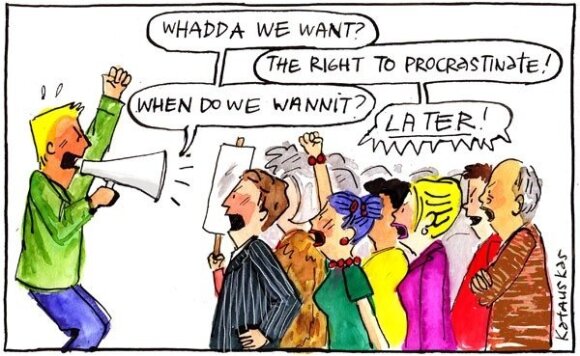 Her work was appearing in a range of publications including The Australian, The Financial Review, The Bulletin, The Sydney Morning Herald and The Age.

Fiona started illustrating books for publishers such as Random House and Allen & Unwin; as well as for organisations such as Women with Disabilities in Australia, International Women’s Development Agency and Community Aid Abroad. She also started designing cards for the Ink Group and t-shirts for Mambo.

The National Museum of Australia started hanging Fiona’s cartoons in their annual collection of political cartoons; and her cartoons appear in Scribe’s annual Best Australian Political Cartoons of the Year series. Fiona also regularly contributes to Eureka Street, an Australian Jesuits online journal which promotes discussion on politics, religion and culture; and to New Matilda, an independent website with top journalists from Australia covering local and international news, analysis and satire. She also regularly contributes to the award-winning TV comedy series, The Chaser. 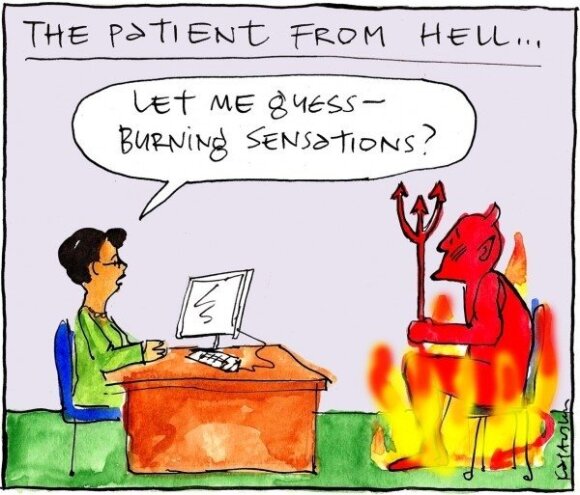 On Eureka Street TV, Fiona described cartooning as the art of the metaphor: “Unlike a newspaper editorial where you state your opinion and outline your case for it, a cartoon has an image that isn’t a literal translation of what is going on but a metaphor for what is going on. There is a step the reader needs to make to understand what it is. It’s not just my opinion. Here is an image, what is it saying? Cartooning has the ability to turn a politician into any animal and have them doing anything – skydiving or on a deserted island. I think professional cartoonists have something in their brains that makes them work in a particular way they see things. It’s a strange skill to have.”

Fiona doesn’t like to do cartoons about things unless she has an opinion on them. And if she’s asked to do something about an issue she doesn’t feel strongly about, she would think what is at the heart of that issue. “You have to be careful not to make things black and white. You might say this is not exactly what I meant as there are shades of grey and can I incorporate that into my cartoon or should I turf it because there are complexities in this?” 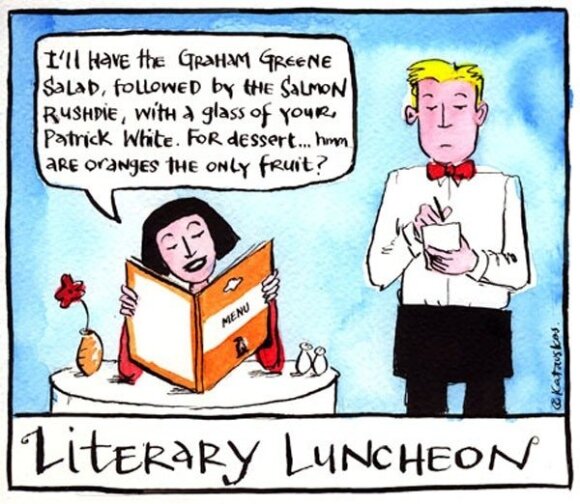 Though not a religious person as such, Fiona has a strict moral and ethical code for herself; and her cartoons often have an ethics and social justice focus.

Fiona is often asked why there are under a handful of women cartoonists in Australia and she answers that she doesn’t think it’s because of sexism, but more of a generational thing when staff editorial cartoonists were hired during the days when it was a male-dominated profession. Because there aren’t many newspapers in Australia, editorial jobs are highly sought after, so nobody leaves. 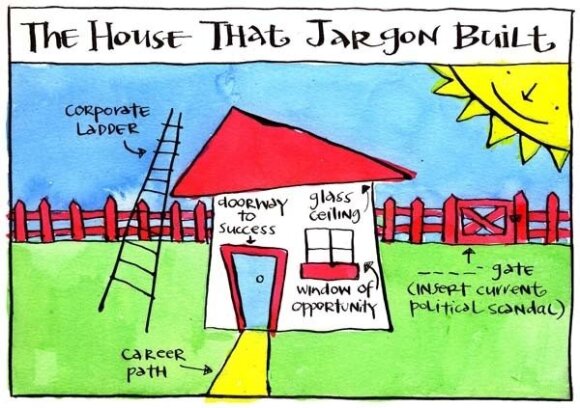 Fiona works from home and even though she doesn’t get regular income, sick leave or holiday pay, she finds freelancing very rewarding. One week she might be thinking up cartoons for a book on the Australian pub music scene; the next she might be working on industrial relations for a union publication; and the week after that, she might be dabbling in politics, health or comedy; which she says makes up for all of the negatives.

To support her cartooning habit, Fiona has tried her hand as a barmaid, a waitress, a cook, a social worker in crisis accommodation for homeless women, a researcher for the National Museum, a late night radio producer and, for many years as the producer of, and occasional guest on, the Talking Pictures segment on The Insiders program on ABC TV. 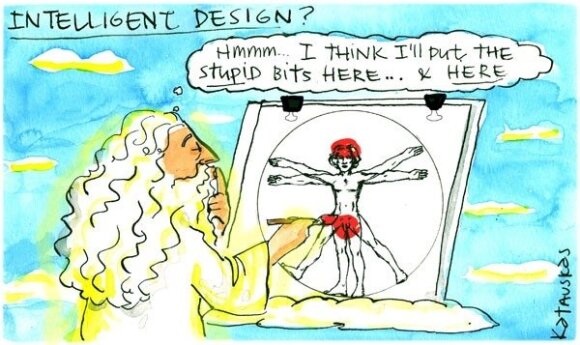 In 2010, Fiona wrote an article for Lithuanian Papers (No. 24/2010), about living in Australia with a Lithuanian name and how everyone thinks it’s Greek and having to always spell your name. She wrote a story about how her father found a way to avoid being typecast as the New Australian kid by temporarily changing his name. When enrolling in a new primary school, he told them his name was “John Newcombe” (before the tennis player was famous), instead of Donatas Katauskas. This gave him the anonymity he was seeking for a whole two weeks until another Lithuanian girl joined his class and told her dad, who promptly told his father, who gave him a good thrashing.

Fiona wrote that she’s proud of her name and when her first son, Max, was born, her partner, Tim O’Connor, and Fiona tossed a coin to see if he would be an O’Connor or a Katauskas, and O’Connor won. But she made sure that both her sons, Max and later, Jonas, had Katauskas as a middle name and hopes that one day, when they have to give their full names, someone somewhere will ask: “Katauskas? That Greek?” 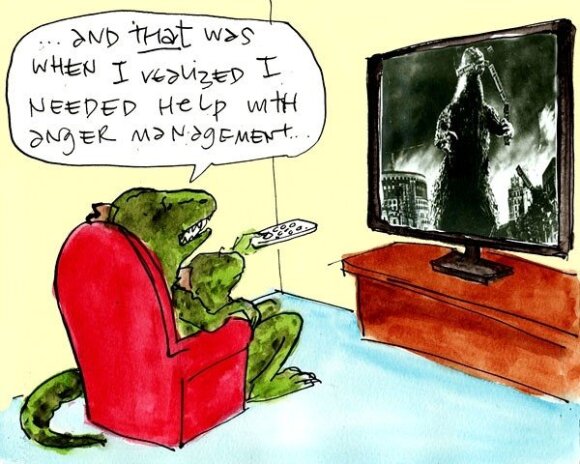 Fiona lives in Petersham, a suburb of Sydney, with her partner Tim O’Connor and their two sons, Max, aged 10, and Jonas, aged 8. Her parents, Donatas and Jennifer, still live in Wahroonga, Sydney; while her uncle, Romanas, his wife, Gražina, and their three children live in Canberra.

Fiona’s children, Max and Jonas, have been to the Lithuanian Club in Sydney and are very keen to know about their heritage. Fiona says when they have had school assignments on family history, they are always very interested in the Lithuanian side of the family and their part in Australia’s history. Max and Jonas go to a very diverse school and are proud of their Lithuanian heritage.

Fiona enjoys reading, travelling, walking and politics. She is still freelancing and says it gets harder every year as so many jobs in the media are becoming either extinct or unsustainable, but she is still hanging in there.

She is currently working on a children’s book but always has other projects on the go and says freelancing means you can never relax!

One day she hopes to become a staff cartoonist for a newspaper, but in the meantime, Fiona isn’t going to keep her fingers crossed, and just have “bucket loads of fun” cartooning. 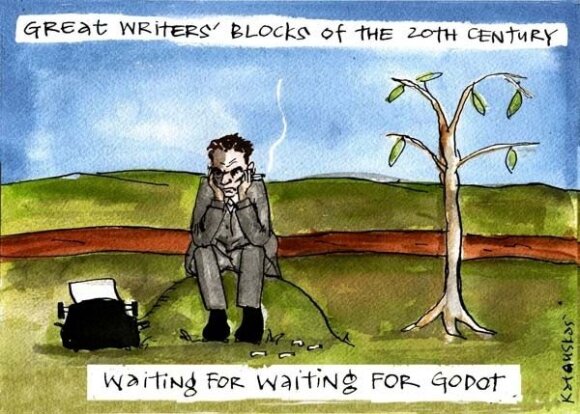 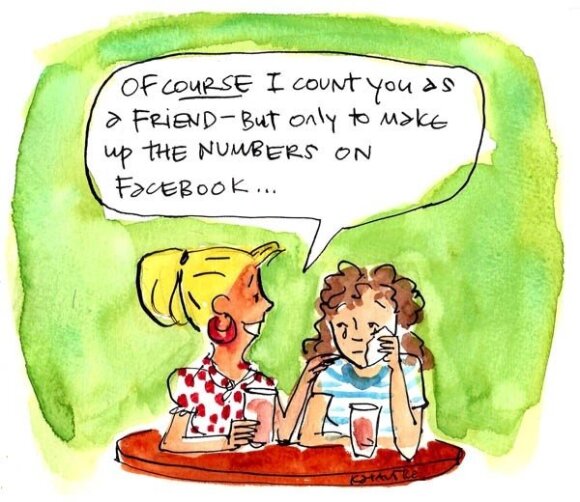 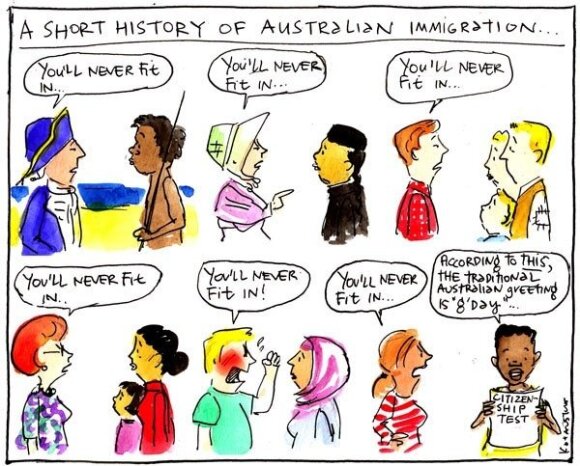