Baltic Bridge
aA
On Sunday, millions of people at the Papal Mass in Philadelphia and around the world heard a new composition by Julian Darius Revie, a Canadian Lithuanian. The piece was heard as Pope Francis received Communion. Revie’s “The Love of God” was performed by The Philadelphia Orchestra and the 350-voice children’s chorus and massed choir. This performance follows Revie’s recent premiere of another original composition, “Mass of the Divine Shepherd,” at Carnegie Hall this past June. 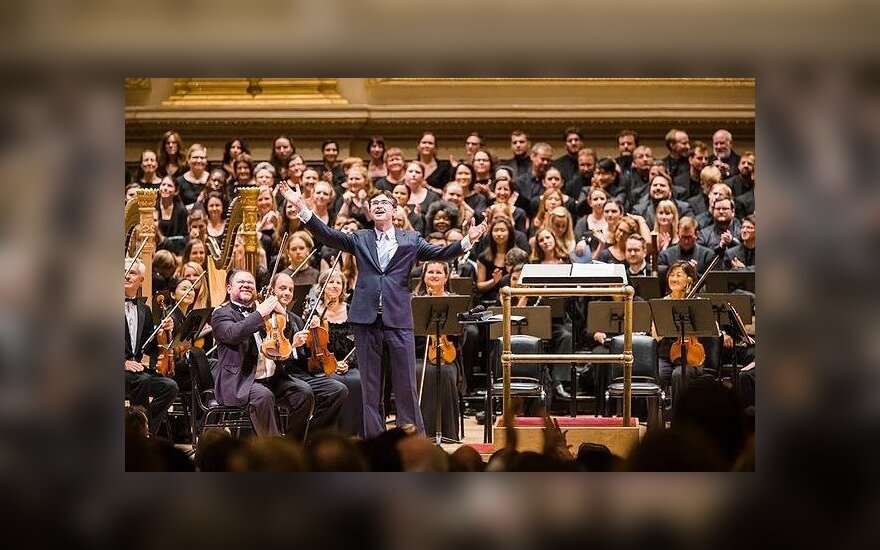 Revie studied piano, organ and clarinet growing up in Canada. He holds degrees in Biochemistry and Molecular Biophysics from Yale University and Caltech in the US; a diploma in piano performance from the Royal Conservatory of Music in Toronto; and a Master’s in Composition from Cambridge University in the UK. He is currently the composer in residence at Yale’s Saint Thomas More Chapel.

Baltic Bridge caught up with Revie in Philadelphia before the performance to discuss the excitement to have the pope listen to his piece and how his Lithuanian heritage influences his compositions.

Baltic Bridge: What has been the greatest challenge in composing this piece and having it performed here today at the Papal Mass?

Julian: The composition of this piece happened smoothly. I was quite pleased with how the process happened. It happened when I was spending most of my time in the cabin in the woods that I live in rural Connecticut and going on walks on the trails around there. So I was in what I felt was a good space for composing.

The experience leading to the performance has been great but different. Friday’s rehearsal with The Philadelphia Orchestra in their concert hall was just an all time peak musical experience in my life. It was awesome. Their conductor Yannik [Nezet-Seguin] is just an extraordinary conductor, and I am totally confident in putting this piece into his hands and letting him bring it to life.

The only real issue is what is going to happen now that we’re outdoors. We’ve had plenty of rehearsals that were in the Cathedral and in the concert hall. Now it is going to be performed by 500 people on a stage built specifically outdoors, which we will never have had the opportunity to rehearse on. I just have to pray that everything that we have done in rehearsal so far will work in a situation where we have no acoustical support.

BB: You mentioned that your mother and her family are from Lithuania. Music and song have always been very important to Lithuanian culture, especially as a source of strength and unity. How do your Lithuanian roots influence your musical composition?

Julian: I believe that Lithuanians have just a natural musical heritage that is in our blood. There is a natural musicianship and artistic quality that is part of being Lithuanian. We see it in contemporary composers. There are so many well-known composers who are Lithuanian today. It is shocking to me, actually, to see that the Baltic countries, but Lithuania specifically, are considered to be the ultimate in terms of living composers and the level of performance in the world of classical music and choral music.

BB: Your accomplishments are an inspiration for many in the Lithuanian community. What is a message that you would like to share with Lithuanian youth around the world?

Julian: Practice your scales, (laughs). We are blessed with a ton of natural musical and artistic talent as Lithuanians. I mean it’s just a statistical fact. So my message is to, please, make the most of that: learn music, learn some instruments, practice your scales, do your music theory. A solid grounding in music technique and understanding can get you a very long way.

BB: How are you feeling about the upcoming performance?

Julian: Of course it is an immense honor. It’s beyond anything that I could have hoped for or dreamed of. At the same time, there are many issues and details to handle. The piece has its musical challenges, mostly surrounding keeping everyone together in timing. While it’s very exciting, I’ve also have had to be very focused on the nitty-gritty details. I’ve had to make sure that I’m doing my job in not just providing the music but also making myself present at the rehearsals and offering the insights that I can provide from the point of view of the composer to make sure that this piece comes off successfully. It has many particular challenges here, both because of the large number of performers and outdoor location of the performance.

BB: What experience or feeling do you hope audience members will take away with them during the communion and your piece?

Julian: All that I’m aiming to do is help to facilitate the possibility for the congregation to enter into a contemplative, reflective spiritual space. I never consider it to be my role as the composer to specify how an audience should emotionally respond or to even to seek specific types of emotions. I try for my music to be one step more open and abstract than that. I don’t think of it as creating music that is being played to them; I think of it as if I’m allowing these sounds to unfold. If they choose to join to join in this experience, then I hope it will be something inviting for them to enter into. As a composer I’m just trying to create time and space and an environment for the audience, or in this case the Congregation, to enter into some reflective space that they really choose and create for themselves. And it will be different for every person.

BB: How did this performance at the Papal Mass come about from your previous concert in Carnegie Hall?

Julian: The story there is that a couple months ago I had a piece that was premiered at Carnegie Hall, “Mass of the Divine Shepherd.” It’s a one-hour piece for a choir orchestra and children’s chorus. It was a very large-scale performance. For that performance we had over 600 musicians, 400 singers, 200 handbell players, and a full orchestra. It was a collaboration between many choirs from around the world. Several choirs were from North America and three great choirs from Europe (England, Norway and Finland). One of the choirs participating was the Philadelphia children’s chorus. I was coming down here to prepare for the Carnegie concert, and it was a result of that that the music director of the Cathedral invited me to write this piece of music for today’s mass.

BB: You’ve had a very exciting year. What should we look forward to next?

Julian: You should all look forward to the big vacation that I’m desperately in need of and am going to take starting on Monday (laughs). Beyond that I do have some musical projects I’d like to do. I’d like to write an organ concerto in particular because that’s a genre that has not been explored by many composers. I would also like to write some settings of Lithuanian folk songs, perhaps expand them into large choral settings or write some orchestral settings.

One of the three kids that Pope Francis agreed to pose for pictures with during his historic visit...