Adam Keiras | the Lithuania Tribune, Great Britain
aA
Since 2011, The Lithuanian Embassy in London along with other organisations have been running the Litvak days. Litvak Days is essentially a celebration and teaching of the impact of Lithuanian Jews on society, including subjects such as architecture, music, culture and arts in general.
Sekite svarbiausias naujienas socialiniuose tinkluose! 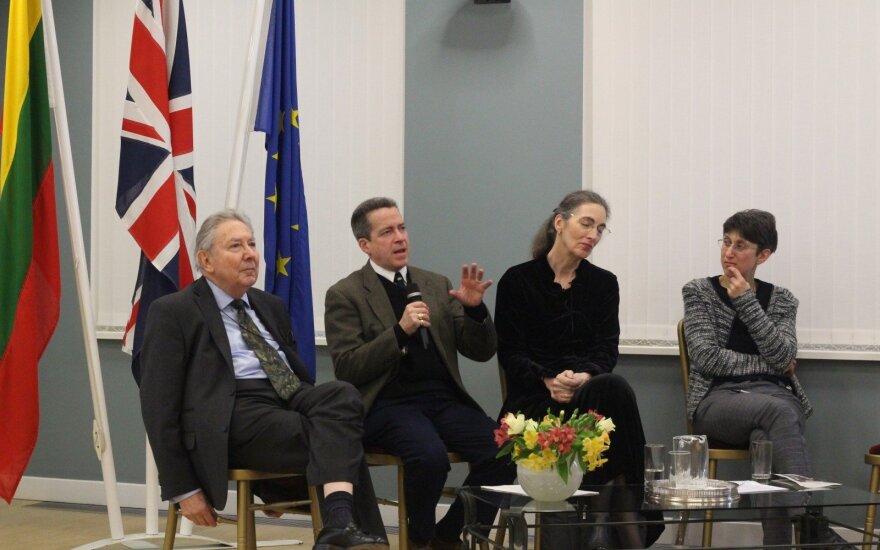 The Jewish History in Lithuania is a very touchy subject, "The Holocaust tragically wiped out 95% of the Jews living in Lithuania, as painful and tragic as this is we believe that it is of the upmost importance to make sure that those events do not overshadow the outstanding tradition of the Jewish people that thrived for many centuries in Lithuania" – Renatas Norkus, Ambassador of Lithuania during his speech at the start of the concert.

On the first day of the event there was a concert performance by Michael Alpert who is a klezmer and Yiddish singer. Klezmer is a musical tradition of the Ashkenazi Jews of Eastern Europe, Alpert has been called a key figure in the revival of this tradition. For the evening he sang beautiful songs in Yiddish, English, Lithuanian and Russian, both just vocally and then with instruments. Alpert told stories and Poems, some of which were written by him.

The 2nd day consisted around key speakers giving lectures about their field of knowledge. One of these speakers was Arūnas Gelūnas who is a member of the Lithuanian Parliament in Vilnius, also former Minister of Culture and former Lithuanian Ambassador to UNESCO. He spoke mainly about the Jewels of Kaunas Modernism of the 1920's and 1930's. Gelūnas talked about how during that time period, 31% of architects and construction specialist in Kaunas were Jewish, this statistic had a great impact on the history of buildings that were being constructed, adding to the impact of Litvaks on Lithuania.

Viv Lachs was also very interesting to listen to, she is a social and cultural historian. Lachs gave interpretations and translations to some culture of the Yiddish speaking immigrant community, this included poetry and songs, which she later sang with so much passion and heart. Lachs gave great insight into the work of Morris Winchevsky born in 1856, who was a Jewish socialist leader in London. Winchevsky founded the Dos Poilishe Yidl (The Little Polish Jew), this was one of the first Yiddish daily socialist newspapers.

Events like these are very important, making us realise how much we don't know of what is around us. This particular event happens once a year around the end of November, beginning of December, check the Lithuanian Embassy website for more information.

Diplomat Renatas Norkus should become Lithuania's new ambassador to the United Kingdom , which is...

It is proposed to put up special information boards at sites of mass Jewish graves in Lithuania to...

Historian: we would lose nothing if we ceased teaching history

Ground-breaking ceremony for "The Lost Shtetl," a unique museum and memorial complex in Lithuania designed by Lahdelma & Mahlamäki architects

On Friday 4th May the ground-breaking ceremony will take place in Šeduva, Lithuania, for The Lost...