the Lithuania Tribune
aA
Gytis Snyder, a 13-year-old boy from Franklin, Tennessee, has led an effort to collect several shopping carts full of toys for an orphanage for disabled or chronically ill children in Lithuania. The orphanage has special significance for the young boy, who is fighting cystic fibrosis – it is the orphanage from which his parents adopted him when he was just 5 years old. 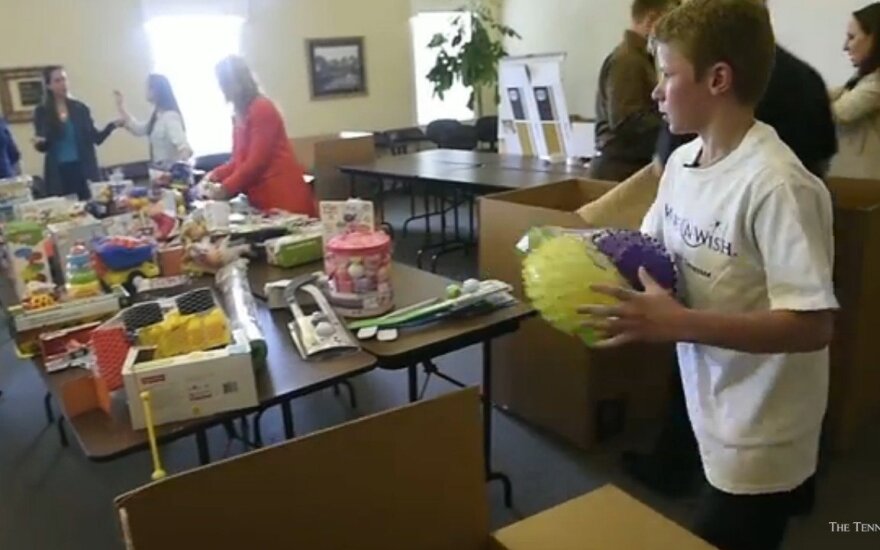 "I just really wanted to go back before I got older," Gytis told The Tennessean. "I forgot so much stuff already. I didn't want to forget more."

His journey to Lithuania will take place in May, but it all began when the Make-A-Wish Foundation, which asks children fighting difficult illnesses for their greatest wishes and tries to fill them, asked Gytis what his greatest wish was. His wish was to travel back to the orphanage of his early childhood and provide the children there with some of the toys that he enjoyed, and other that he may have missed, when he was a child.

"Most of my other ones (cases) have been trips or getting stuff," said Make-A-Wish volunteer Tonya Thepthongsay.

The organisation helped organize a before-hours shopping spree at Toys-R-Us complete with some help from the Nashville Predators Foundation, which is associated with Tennessee's NHL hockey team.

Gytis, accompanied by the team's mascot and some of the players' wives, grabbed a load of toys to take back to the children at Gytis' orphanage in Lithuania. "He really thought about it and took care in choosing these special things to bring back to the children over there," Kristen Laviolette, the wife of Predators coach Peter Laviolette, told The Tennessean. "He didn’t really want to hit the aisles with girls’ dolls, but he took it and he embraced it. He was too funny."

Gytis loves to shoot BB guns competitively and even runs his own neighborhood lawn care business. However, his mother, Bonnie Snyder, said "He kind of protects himself. He doesn't want people to know he's different."

The genetic cystic fibrosis illness he fights behind the scenes creates an excess of mucus in his lungs which force him to go through an hour-long regimen of treatments twice a day: inhalers, saltwater solutions, and airway clearance using a vibrating vest to shake the mucus free. He then inhales anti-inflammatory medicine and has to take enzymes with any food he eats, even if it's just a snack. Every six months, he also needs to receive high-dose drugs intravenously.

Most of the children at Gytis' orphanage face similar difficult illnesses, and his illness was part of the reason his parents chose to adopt him: his father, David Snyder, is respiratory therapist, and he understood the challenges that Gytis would face.

However, Gytis' mother said that he understands that children with other illnesses, like chemotherapy, can have even more difficulties. "I think that's how he survived between being sick — he just looks at bright side of things," she said. "Every day of his life he looks forward to it."

Returning to Lithuania for the first time

The trip back to Lithuania, planned for May, will be the first time back in Lithuania both for Gytis and for his parents, whose first visit here was for his adoption. His three older siblings will be visiting the country for the first time.

"We're really looking forward to what he's gonna remember," his mother said. "I really hope it will jog his memory and a lot of it will flood back in his mind."
Gytis will also be joined by a long-time friend, 14-year-old Sam Huey, who was adopted from the same orphanage by another US family. "By giving these orphans toys, I think he’s just bringing them hope," Sam told The Tennessean. "Like he’s bringing them that message of 'Stay strong. We can do this.'"

"I have bittersweet memories of the orphanage," Huey said. "There’s some that were good and others that were not that good. But I’m glad I can come back with Gytis."

Kristen Huey, Sam's mom, said that the orphanage Gytis and Sam are returning to has fewer resources than the other she had also adopted children from, “so it’s an even darker place that the sweet heart of Gytis comes from. It just makes it all the more remarkable that that’s the place he wants to go back to."

Gytis, whose birthday is in May, cannot wait for the trip: "Christmas comes right at my birthday," he said.

Here's a video about Gytis' story from The Tennessean: