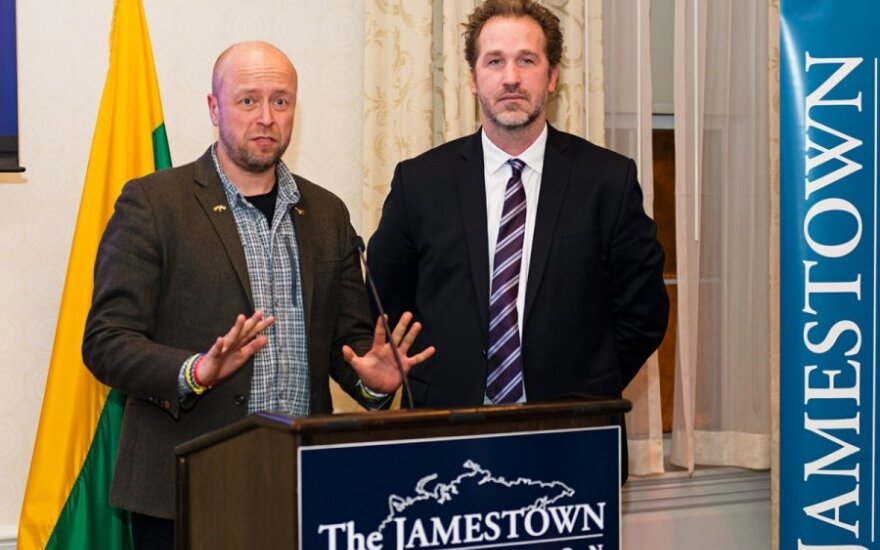 The Invisible Front, a movie about Lithuanian freedom fighters or partisans that operated in the post World War II period, was shown for the first time in the US capital in presence of the two of filmmakers, Jonas Ohman and Vincas Sruoginis.

Glen Howard, President of the Jamestown Foundation, delivered the opening remarks. The Jamestown Foundation has a large network of experts on Russian affairs as well Middle Eastern terrorist networks. About the tragic events of 13 January, Mr. Howard said: “Lithuanian historic events are directly applicable to the present situation in Eastern Ukraine.”

The Lithuanian Ambassador to the USA Žygimantas Pavilionis said: “When we see the present events in Ukraine and Russia’s behaviour, we really wonder what lessons we have learned from the events depicted in this film and the events of 13 January 1991?”

Ambassador Pavilionis honoured Paul Goble for his efforts towards Lithuania, particularly when he was often a lone voice in the US government prior to serving as a special adviser on Soviet nationality issues and Baltic affairs to Secretary of State James Baker (under President George Bush Sr.)

US Congressman John Shimkus, whose paternal grandfather was of Lithuanian descent, expressed his support and admiration for the Lithuanian quest to remain free.

Paul Goble said that around the time of the tragic events of 13 January he attended a church service in Baltimore MD. He observed how three generations of Lithuanians living in this large US city were all speaking Lithuanian. He said: “I regret not seeing Mikhail Gorbachev in this church. For if Gorbachev had seen these three generations living and maintaining their language and culture far from their homeland, he would have realised that no amount of bullets could prevent Lithuanians in their own country from being free again.”

He also reminded the audience of the efforts of Congressman John Shimkus in making the necessary steps for Lithuania, the Baltic states and neighbouring countries to join NATO. If it were not for Lithuania being a member of NATO, Paul Goble said, “we would probably see today little green man marching on the streets of Vilnius”.

After the presentations, the movie the Invisible Front was shown. The film is an historic account of the Forest Brothers, the anti-Soviet partisans that fought for Lithuania's independence after the Soviet occupation of 1944, and centres around the story of Juozas Lukša-Daumantas. Lukša was the most prominent leader of the Lithuanian resistance.

About the film The Invisible Front

The Invisible Front is an historic account of those men and women that fought for Lithuania's independence after the Soviet Invasion of Lithuania in 1944. It was in 1944 that Soviet forces entered and occupied Lithuania for a second time in less than five years. However, this time young people decided to risk their lives and fought back against the Soviet aggressors. They did so forming a guerilla type army that consisted of partisans, commonly known as the Forest Brothers. The Forest Brothers gained mythical status, particularly among Russians.

The Invisible Front centres on the Forest Brother's charismatic leader, Juozas Lukša, who joined the resistance against the Soviets with his three brothers. Juozas Lukša, a former architecture student, broke through the Iron Curtain twice and he returned to Lithuania as a CIA operative in 1950. Lukša realised that the pen was mightier than the sword and risked his life escaping to Paris in 1948. It was there that he informed the world about the struggle of the Lithuanian partisans. It was in Pairs that Lukša met up with Western intelligence agencies and wrote a memoir.

It was also in Paris that he met Nijolė, the love of his life. Shortly after their wedding, Lukša was air-dropped back into Soviet Lithuania by the CIA. Through Lukša's writing and love letters to Nijolė, the movie recounts the story of Lithuanian resistance.

The movie was awarded the Audience Award at Vilnius International Film Festival, Kino Pavasaris, in 2014.