Mindaugas Jackevičius,
DELFI EN
Recent statements by Vladimir Zhirinovsky, Vice Chairman of the Russian Duma, were meant to highlight that, from now on, Russia will be a key decision maker in European security matters. 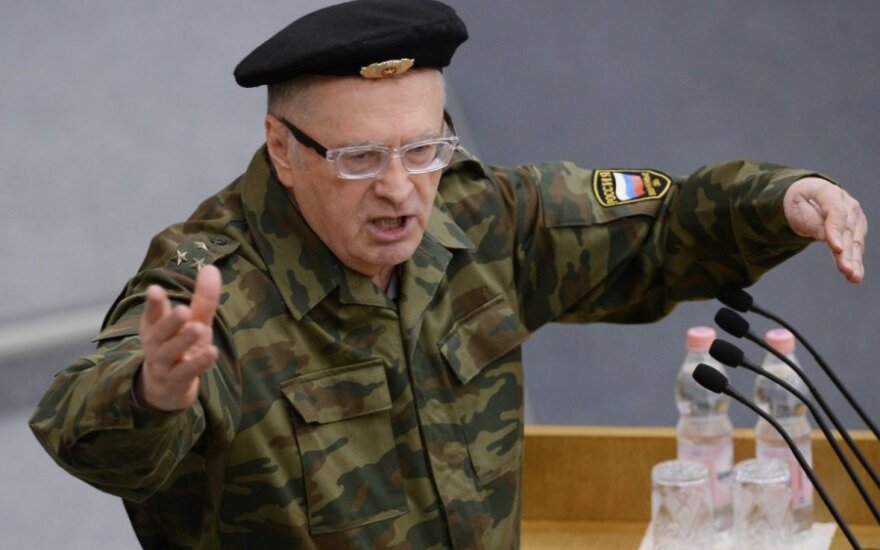 This is how political scientist Laurynas Kasčiūnas views the Russian politician’s controversial statement.

Last Monday, Zhirinovsky threatened Poland and the Baltic States with bombing, if Europe and NATO persist with their current policies toward the Russian Federation and do not give up on Ukraine.

Speaking on Rossiya 24 channel, Zhirinovsky claimed that "all war and peace issues in general and, today, those related to Ukraine, will be decided by one man alone, the leader of the Russian state". He added that Russian President Vladimir Putin might already have plans for world war three.

Related articles
Opinion: How to restrain the Russian Czar?
Opinion: What can stop Russia?  (1)

Zhirinovsky's made some even more ominous statements regarding Russia's neighbours: "The Baltic States, Poland - they are doomed. They will be swept away. Nothing will remain there. They should sober up, the leaders of these dwarf nations, [and see] how they are exposing themselves. Sure, America is safe, nothing will happen to it, it's far away, while Eastern European countries are exposing themselves to, shall I say, the danger of complete annihilation."

According to some, Zhirinovsky, notorious for his wild statements, is simply yapping on. Meanwhile others think that the politician is not pulling such claims off the cuff, but rather that he is broadcasting the Kremlin’s views.

“I believe both camps are somewhat correct: he is a political jester, he lives off of it and earns political dividends. At the same time, he is able to broadcast certain news as well,” said Kasčiūnas.

Nevertheless, according to the political scientist, the key part of the statement is not Zhirinovsky’s own claims about a third world war, the Baltic States or Lithuania.

“What he wanted to express most was that Vladimir Putin is now the one to decide that Russia is returning to the international stage. I think this was the highlight,” says the political scientist. According to him, the message was that Russia would now arbitrate any further NATO expansion into post-Soviet territories, as well as that of the European Union, to make sure that the NATO bloc is weak.

“Analysis shows that Russia is currently incapable of challenging the NATO bloc as a whole. It can pose a threat to individual states, such as the Baltics, but there is Article 5 to keep in mind. If the article keeps working as intended, then Russia has no chance and it knows that very well and so does NATO,” said Kasčiūnas.

According to Article 5 of the North Atlantic Treaty, all NATO states pledge to protect one another. Armed aggression against one or several NATO members would be viewed as an attack on all members.

According to the political scientist, Zhirinovsky and more respectable commentators are trying to express that Russia does not believe that Article 5 and NATO security guarantees will work. Due to this, the main goal for Lithuania and NATO now is to reinforce Article 5 during the NATO summit in Wales this September to make sure the system functions reliably.

According to Kasčiūnas, NATO is prepared to do much to make sure that the Baltic States and Poland have improved security, that they would be even more integrated into NATO defence systems and that they would be equal partners, rather than just a buffer zone.

Meanwhile Georgia has been less fortunate. The state expected to attain NATO membership action plan, but, notes Kasčiūnas, Russia might have gained an informal veto on any further NATO interaction with Georgia.

Opinion: How to restrain the Russian Czar?

While the war in Eastern Ukraine continues, no one can come up with an idea of how to restrain Russia...

Opinion: What can stop Russia? (1)

The sanctions of the West against Russia are followed by discussions about what effect they could...