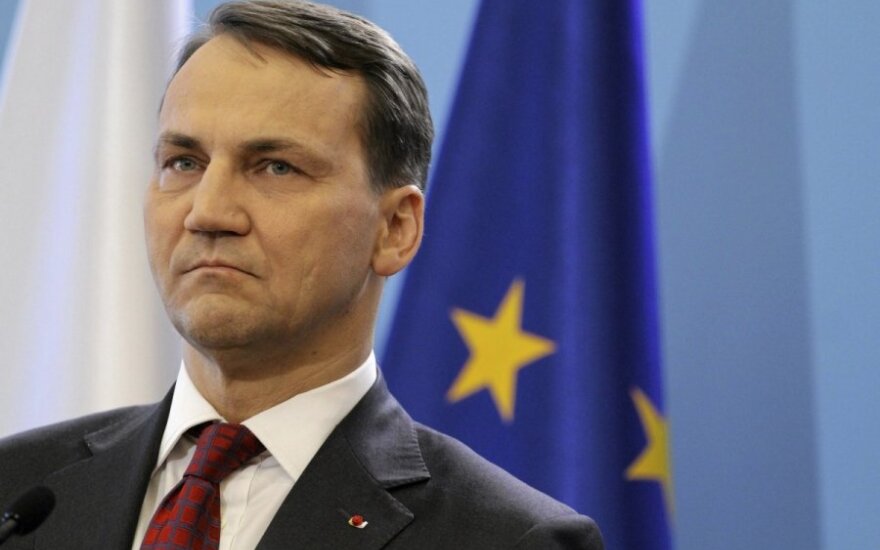 Sikorski is considered as a potential replacement for the current EU foreign policy chief Catherine Ashton. Warsaw officially raised his candidacy last month, before the phone spying scandal emerged. Polish newspaper Wprost published the recordings, in which Sikorski is heard stating that Polish relations with the United States are “worthless”, and in which he also blames British Prime Minister David Cameron for “incompetency with EU affairs.” After the scandal, Poland’s ruling coalition had to undertake a vote of confidence.

Sikorski is also known for his harsh statements about Lithuania. Where could he work to benefit our country most? Does he still have a chance to replace Ashton? Would Lithuania profit be better off if he failed?

“I do not think that Sikorski, as the representative of the European Commission of Foreign Affairs, would be a bad candidate for Lithuania, because, first and foremost, he is a man who is aware of the threats posed by the Eastern Europe to both Lithuania and Poland,” says Tomas Janeliūnas, Associate Professor in International Relations and Political Science Institute (TSPMI) of Vilnius University (VU).

According to Janeliūnas, in this case, Sikorski would be more beneficial to Lithuania than Ashton. His approach to the events in Russia and Ukraine, and his insistence on having firmer EU foreign policy is very much in line with Lithuania’s interests.

“But he is Polish foreign minister, and there is naturally a certain tension between Lithuania and Poland regarding minorities. In this case, he would specifically protect the interests of Poland,” said Janeliūnas. The political editor believes that as a representative of the European Commission, Sikorski could not stand for Polish interests too transparently, however. One of the characteristics of this position is pushing aside national interests and embracing broader ones, which are shared by the EU.

“This phone-tapping scandal is likely a genuine effort to discredit the Polish foreign minister. One could raise the questions: who is going to profit from this discrediting? Who might not want the EU to have a stronger stance on foreign politics?

I think everyone suspects the East, specifically Russia, as [this incident] would build on previous attempts to compromise Eastern European countries,” Janeliūnas explained.

The political editor remembered Estonian Foreign Minister Urmas Paet’s leaked interviews and conversations, as well as leaked conversations between Ambassador of Ukraine and Victoria Nuland, secretary at the U.S. Department of State. In his view, this recent scandal is simply more of the same.

However, Janeliūnas claims Sikorski still has a chance. The scandal is, of course, not helpful, but recently there have been many scandals of this kind, one of which involved Ashton herself. “I think that higher-ranked politicians react to it a bit differently than the general public. I think they tend to take the circumstances into consideration, too. I hesitate to say that this candidacy is already buried.”

If Sikorski does not succeed, could someone from Lithuania or someone else in the region take Ashton’s place?

Janeliūnas is skeptical about the possibility for Lithuania to present a candidate, mainly because it does not have many professional candidates on hand.

For example, President Dalia Grybauskaitė will not suggest her candidacy for EU posts and will stick to her presidential duties. Foreign Affairs Minister Linas Linkevičius could be a potential contender, but it is doubtful that he would receive much support.

“Despite the fact that he is a competent professional who has earned good reputation in the EU, he will be seen as a representative of a very small country, and having interests that are maybe too narrow for the EU,” said Janeliūnas.

Kasčiūnas: he’s too strong to take up this post

“I think this is a position, in which EU leaders do not wish to see any strong political figures. Whatever we think of Sikorski’s attitude towards Lithuania, his political figure has significantly grown on European level. Then it is very likely that he will not be given the post merely because of recent events,” states Laurynas Kasčiūnas, Eastern Europe Studies Centre analyst.

He would not let himself be pushed around and he would defend his views aggressively. “It is natural that Sikorski’s candidacy is inconvenient for some national leaders, who usually like to appoint a softer, lesser-known, and less charismatic man for this post,” he adds.

According to Kasčiūnas, other nuance regarding Sikorski’s candidacy is related to the rumours that he is being pushed by the Anglo-Saxon’s wing of the EU, and maybe that they are doing it with American support. However, the leakage of his statements towards Cameron and the U.S. could result in decreased supporters and negatively affect his chances.

However, Kasčiūnas notes that lately, this sort of scandal is no longer dramatized, and that the aftermath is much less traumatic, compared to years past.

Kasčiūnas does not see many ways in which Lithuania would benefit from Sikorski’s failure. “There is no chance for Lithuania to take his place [by proposing its own candidate], and I see no strong movement in that direction. Lithuania should not yet consider applying for these type of positions.”

According to him, it would be sad if the position goes to a representative of southern Europe. For example, an Italian representative would be even worse than Ashton. “And to come up with ideas worse than Ashton’s is tough,” he joked. Kasčiūnas recalls that there are known aims to consider: such as switching to a visa-free regime with Russia during Italy’s presidency of the EU, which would be a complete misconception.

“I think it would be better for us to have him in EU Foreign Minister’s position instead of Polish Foreign Ministry. As Polish Foreign Minister, he only demonstrates a clear lack of respect for the sovereignty of Lithuania. I feel free to say that he does not even try to understand our historical background and just tries to impose an agenda that only suits ethnic minorities. By doing so, he tries to increase his popularity in inner politics, but does it completely disproportionally,” Kasčiūnas assessed.

Kasčiūnas says Sikorski’s attempts to merge ethnic minority issues with strategically important projects for Lithuania is beyond the limits of criticism.

Despite that, he believes Sikorski would be a good EU ​​foreign minister: he possesses a realistic attitude, has a good understanding of existential security problems in Eastern Europe, and has a solid approach to Eastern Partnership development trends and prospects.