(2)
DELFI EN
aA
German Chancellor Angela Merkel has stated on several occasions that stationing permanent NATO forces in Eastern Europe would be in breach of the 1997 NATO-Russia agreement. However, legal expert Erika Leonaitė, a lecturer at the International Relations and Political Science Institute of Vilnius University, says the reality is more complicated than that. 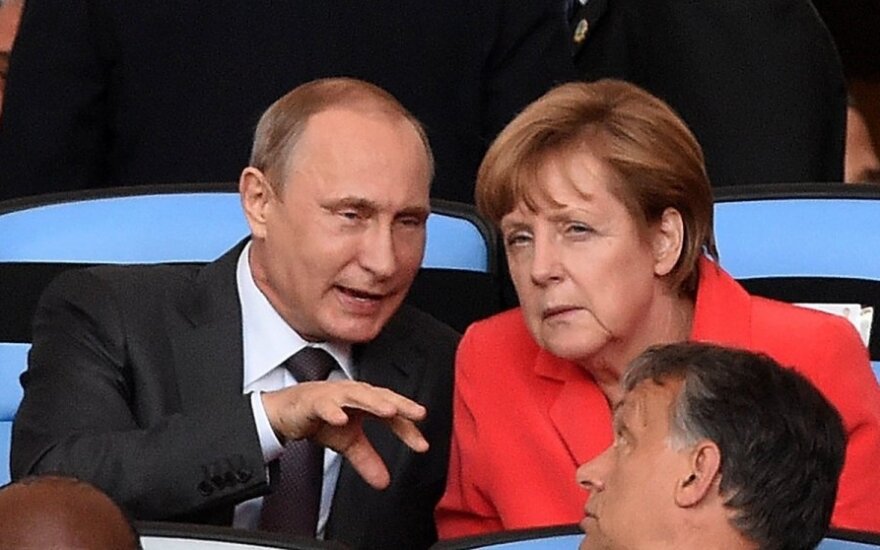 First, she says, the Founding Act on Mutual Relations, Cooperation and Security, signed in Paris in 1997, is not, strictly speaking, an international treaty, but rather a political declaration. Second, Russia itself has breached the agreement with its actions in Ukraine.

Agreement scrapped by Russia itself

Related articles
Grybauskaitė: Ukraine fights for us all, we should help in any way possible  (5)
Kiev and Moscow agree on "ceasefire process" in eastern Ukraine

"I would like to note that the Founding Act on Mutual Relations, Cooperation and Security, signed by NATO and Russia in Paris in 1997, is not an international treaty, so it gives rise to no legal obligations and is therefore more of a political declaration. In other words, this document, which was intended to lay down the foundations and procedures for NATO-Russia cooperation, sets out obligations that are not legal, but political in nature, and sticking to them is a matter of good will. Breaching these obligations does not lead to legal liability," Leonaitė says.

She says that the main objective of the NATO-Russia agreement was to build a sustainable peace in Europe. It is for this goal that NATO and Russia pledged to build their mutual relations on the basis of respect for international legal norms, for democracy and political pluralism, the rule of law, human rights and freedoms.

"As a matter of fact," Leonaitė says, "the preamble to the Founding Act states that 'Russia is continuing the building of a democratic society and the realisation of its political and economic transformation.' Most importantly, the Founding Act explicitly states the obligation to refrain from using armed force and threat of using armed force not only by one side against the other, but also against any other country, its sovereignty, territorial integrity or political independence in any way that is incompatible with the principles set out in the UN Charter or the Helsinki Final Act. Moreover, it reaffirmed an obligation to respect other states' sovereignty, independence and territorial integrity, inviolability of borders and national self-determination. Doubtlessly, these basic legal principles, which apply to the entire international community, are a precondition for the NATO-Russia political agreement to be viable."

The legal expert adds that recent developments in Eastern Europe leave little doubt that it is Russia that breached every single principles spelled out in the Founding Act, effectively rendering it null and void.

"In the current situation, therefore, there is little sense in talking about viability of these political obligations," Leonaitė says.

She notes that even if the 1997 Founding Act were a binding international treaty, Russia's aggression against Ukraine could be regarded as a major violation and a sufficient basis for NATO to terminate or suspend the treaty in compliance with the Vienna Convention rules.

NATO bases - violation or not?

Commenting on the oft-quoted argument that the Founding Act precludes setting up permanent NATO bases in the territories of eastern members, Leonaitė notes that the document refers to the security environment as it was in 1997. It has changed significantly since then, she says.

"NATO reiterates that in the current and foreseeable security environment, the Alliance will carry out its collective defence and other missions by ensuring the necessary interoperability, integration, and capability for reinforcement rather than by additional permanent stationing of substantial combat forces. Accordingly, it will have to rely on adequate infrastructure commensurate with the above tasks. In this context, reinforcement may take place, when necessary, in the event of defence against a threat of aggression… Russia will exercise similar restraint in its conventional force deployments in Europe."

"The agreement clearly speaks of the 'current' - i.e., 1997 - and 'foreseeable' security situation. It is more than obvious that Russia's aggression against Ukraine (annexing Crimea and sending armed forces to Donbass) as well as its support for armed separatist groups in east Ukraine have effected essential changes in security environment," Leonaitė says.

According to her, in no way could such changes have been foreseen when the agreement was signed.

"Third, one cannot ignore Russia's reciprocal pledge to exercise 'similar restraint'. In 2007, Russia suspended its membership in the Treaty on Conventional Armed Forces in Europe, which is often described as the cornerstone of European security, and stopped observing restrictions laid out therein. Moreover, Russia deploys significant forces in Kaliningrad, much bigger than any potential NATO bases in the region," the legal expert concludes.

Grybauskaitė: Ukraine fights for us all, we should help in any way possible (5) 6083

Lithuania's President Dalia Grybauskaitė has said she values the US and NATO commitment to defend...

Kiev and Moscow agree on "ceasefire process" in eastern Ukraine

Opinion: In Wales, NATO will have to decide what it is (1)

The NATO summit on 4-5 September in Wales can be considered the most important meeting of NATO...

Lithuania's priorities for upcoming NATO summit presented to US military