Vytautas Landsbergis: There are guys Putin is afraid of

Edmundas Jakilaitis,
www.lrt.lt
aA
"Russia is an unreliable partner, irrespectively of what it says. The world is beginning to learn how to see what Russia actually does," says Prof. Vytautas Landsbergis. 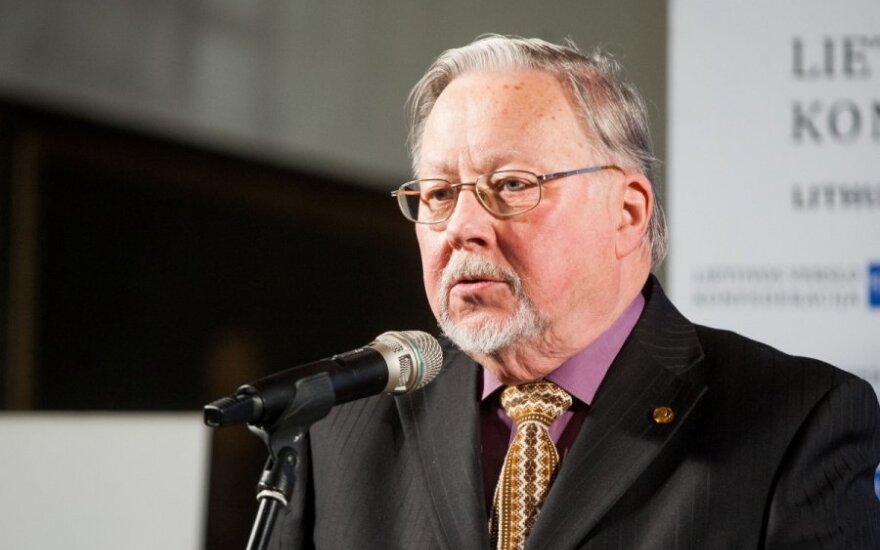 The Lithuanian politician and former leader of the country that led it to independence from the USSR, Landsbergis says that the West still gives Russian President Vladimir Putin the benefit of the doubt all too often. "For one day. Even though they could refuse to believe him at once - we have heard all this before," Landsbergis said in an interview to the national television LRT.

Professor, a few days ago we heard reports that Putin ordered Russian troops to retreat from the Ukrainian border. On Thursday, however, the Ukrainian Security and Defence Council confirmed what NATO had said before - that Russia, contrary to what had said, did not withdraw its forces from the border. What do you make of this?

Business as usual. The Russian leadership is lying without restraint and sometimes people still believe it. For one day. Even though they could refuse to believe him at once - we have heard all this before. They could say: let's go and see ourselves; our observers will inspect whether the troops are really retreating, whether military actions are stopped, whether ceasefire conditions are observed. If they are not - address your declarations to the Moon, for all we care.

But that's not the reaction. Once Russia made its statements, some started immediately talking about easing sanctions, since Putin had made a step in the right direction.

The big paleface brother has stepped on the rake three times and wants to do it once again. What else can one say?

You are unconvinced by these promises? You think that the Russian army will stay in positions and the conflict will be prolonged for as long as possible?

No, the army will stay for as long as Putin wants it there. Irrespective of what he said. He might order the army to retreat while saying it would stay in place, "we are ready to fight the Ukrainian bad guys until the end". Putin might be saying vicious things to his own people, to some Kremlin fascists, but right now he is doing the opposite. He speaks nicely to the West but his actions are nasty. He could do the opposite. Actions are what matters.

Sanctions seem to be bringing the desired effect. The rouble has fallen 20 percent, investors are fleeing, economic troubles are mounting, not to mention the global trends of oil prices.

Partners have also suspended many programmes because there's no one to cooperate with - Russia is an unreliable partner, irrespectively of what it says. The world is beginning to learn how to see what Russia actually does.

Either way, the effects must have a bearing on Putin's actions?

We have little idea of what has a bearing on his actions. Who are in his entourage, whom is he afraid? There might be guys who threaten to replace him in order to wage and even bigger war - they might be scolding Putin for not taking Kiev. There are guys like these, we know of them. We know the names of those who scold Putin for not having bombed Kiev yet. They see it as a sign of weakness. Can he be scared of them? No one knows what the big brother is telling him. If the big brother is not saying anything, that is also disconcerting, because he could say something one day.

What do you mean when you say, big brother?

The one who has so many "compatriots" in east Russia. Why shouldn't they be defended? Life is not sweet for them there. The lucky ones live in the cities, where they make up the dominant class. But masses of workers were taken to cut trees in the snowforests - where Russian people make fun of them, without quite realizing what they are doing.

You have touched upon the subject of calls to ease sanctions on Russia. For instance, the French foreign minister says that economic tensions are not a long-term goal in relations with Russia. Calls to ease sanctions are getting louder. Political leaders seem to be getting accustomed to the situation in Ukraine. Is that your impression too?

This is what always happens and what each aggressor counts on. "Well, a plane fell somewhere, a few people dead, but what can you do, such things happen." Who downed the plane? Highly-skilled Russian soldiers using Russian equipment. What else is there to discover? Right now, they [the West] only have to agree to keep silent about it, because otherwise they'd have to do something. The "thou shalt buy, thou shalt buy not" sanctions would not do any more. One would be hardpressed to demand accountability: names of people who launched the rocket. Putin, what have you done with them? Hand them over to an international court or try them yourself.

Several hundred Dutchmen were killed, but the rest are concerned about selling Dutch cheese to Russia. What will happen if they don't buy the cheese?

We also have enough people who sweat over trade, but Lithuanians were not the ones killed, the Dutch were. Europe is so chaotic. Sure, we could reframe the debate and say that it's not Russia that did it, but sanctions. But should we?

On Thursday, Putin visited Serbia, where he was warmly welcomed, there was even a military parade.

Serbia is Russia's last bastion in the Balkans. Much effort was put into maintaining Russia's influence in the region but gradually it lost everything - all the countries transitioned into democracies, the Yugoslav communist union fell apart. Then they supported Milošević, encouraged to resist, destroy Kosovo Albanians. They started a genocide there, a mass resettlement. Made so much money that they can now boldly talk about how bad NATO and the US behaved in stopping the genocide. They can talk all they want, but they lost the Serbia that claimed Kosovo was sacred and untouchable. They also lost Kosovo, because they behaved inhumanely.

What do you make of the stance of the Serbian government? The country has aspirations to join the EU. But suddenly they throw this celebration of the liberation of Belgrade several days early, complete with a military parade, something that hadn't happened in thirty years. And all this for the occasion of the Russian president's visit.

This is fawning to the president, something to do old influences. Very old. Back in the tsarist times, Serbia always looked towards Russia. There's still the so-called Russian influence zone, it's to do with cultural and historic reasons, but it has eroded very much. Serbia was offered to be a European country, to move closer to the EU. There even were some changes in the government - a pro-European president, only to be replace by an anti-European one again. The official goal is still there, joining the EU, but it's not the only option any more. What if Yanukovych were still in power in Ukraine? He would also probably throw a parade for Putin and be hailed as a hero rescuing the country form the EU.