Vytautas Landsbergis on Minsk agreement: It is worse than Munich

Eglė Samoškaitė
Parašyti
autoriui
aA
Vytautas Landsbergis, Lithuania's first post-Soviet leader and honorary chairman of the conservative Homeland Union, says that the Minks agreement for ceasefire between Kiev's forces and Moscow-supported separatist fighters in eastern Ukraine, which was signed on Thursday, is worse than the Munich agreement of 1938. 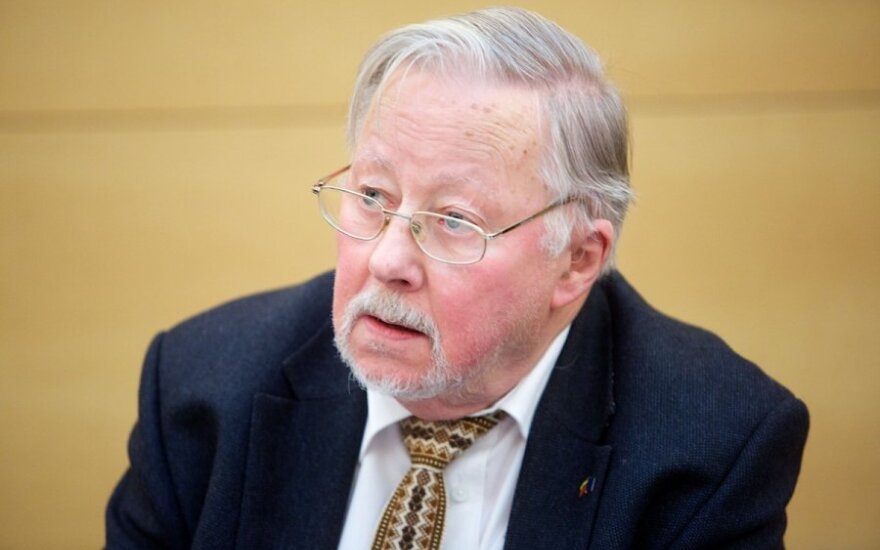 The conference in 1938 has come to symbolize Western impotence after Great Britain and France tried to appease Adolf Hitler by giving him Sudetenland, which led to occupation of Czechoslovakia and, eventually, World War Two.

"In that Munich conference, there probably weren't any Sudeten SS men speaking in the name of the nation and demanding to carve up Czecholsovakia. At least they were not sitting at the table. And these [Ukraine's separatist fighters] did," Landsbergis said on Thursday, after presenting his new book in the Ministry of Foreign Affairs of Lithuania.

The politician noted that the Minsk talks on the future of Ukraine gave word not just to German Chancellor Angela Merkel, French President François Hollande, Ukraine's Petro Poroshenko and Russia's Vladimir Putin, but also to self-appointed leaders of the separatist-held regions, Igor Plotnitsky and Alexander Zakharchenko.

The Minsk agreement demands the withdrawal of heavy military equipment behind a 50-kilometre demilitarized zone. Kiev has pledged to implement a constitutional reform, delegate self-government powers to the separatist regions and resume payments.

"As you read through it [the agreement], you are aghast - why do they have to give up everything? Everything. Give territory, recognize these bandits as leaders who get invited to the table and allowed to sign documents. Why give this legitimization to Putin's mercenaries?" Landsbergis wonders, adding that the same line was agreed on in ceasefire talks on 19 September 2014.

Ukraine's President Petro Poroshenko, asked to comment on the constitutional reform outlined in the agreement, noted that it would involve decentralization, not federalization. Landsbergis thinks, however, that these are words of the defeated party.

"These are talks of the defeated. First, the mercenaries should not have been allowed to sit in the talks. If countries negotiate and Russia is dictating the kind of constitutional reform they should have, then one can ask - where is your own constitutional reform, when are you starting to respect your constitution, Mr. Putin? Otherwise, shut up and don't tell us about the constitution. We are a democratic country with a popularly elected parliament. I am an elected president, Poroshenko could say. Whereas you appointed yourself," Landsbergis says. 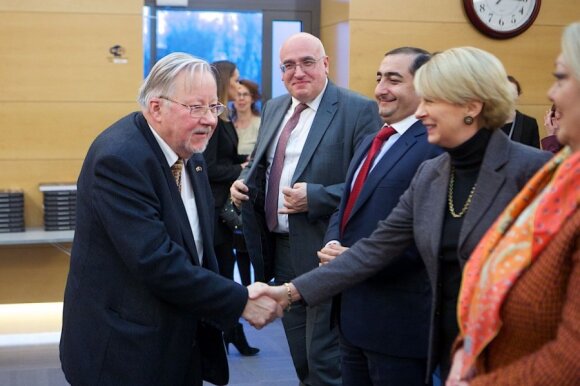 He adds he is disappointed with German Chancellor Merkel, who, he says, believed Putin's "puppet theatre". This is how he sees Merkel's statements that Putin had exerted pressure on the separatists to sign the agreement.

"She accepted the puppet theatre. What they did in the end was a puppet show. Perhaps everything followed stage instructions. Putin allegedly demands something of his groupies and they do not listen. He must put his fist down and they insist they will still be able to refuse. All sane people should realize this was but a silly show, but they take it seriously. Why sink to such a low level?" Landsbergis is indignant.

During Thursday's event at the Foreign Ministry, where Landsbergis presented his new book on 13 January 1991 events to foreign ambassadors, he insisted that Western powers should arm Ukraine.

"I still believe that the Ukrainians could be armed against Russian tanks. Otherwise it means that Ukraine has been sold out. It's worse than Munich. We should discuss Munich today," Landsbergis told the audience.

The Lithuanian politician, who led Lithuania's own liberation from the USSR efforts in the late 1980s and early 1990s, has said that Russia is telling blatant lies, which are nonetheless accepted as something worth discussing. "This way, everything becomes partly true, partly false, but in fact it is utterly false, because it is a purposefully designed lie aimed at influencing our judgement. It is war on thinking," he said.

Landsbergis believes that there have been only a few moments when Russian leaders were told the truth. Once, US Secretary of State John Kerry told Russia's Foreign Minister Sergey Lavrov that he couldn't listen any more of what the latter was saying.

"Only one person, as far as I know from the media, Secretary of State John Kerry told Lavrov: It's impossible to listen to you, Mr. Lavrov. It was reported, though I wasn't there and no one recorded it. But it was reported that Kerry couldn't listen to what the Russians were saying. In normal parlance that means: Go to hell, liar," according to Landsbergis.

"President Barack Obama, too, once said he had nothing to talk about with Putin. However, they [Russians] manage to force Western leaders into talking not just with them, but also with the bandits from Donetsk," he added.

According to Landsbergis, Russia has declared war on the Western civilization.

"West is the enemy. The Kremlin said so. In Arabic, that translates to boko haram. That's the Kremlin's slogan, boko haram."

Boko Haram is the name of a terrorist Islamist movement based in northeast Nigeria. The name in Arabic means "Western education is forbidden".

"However, Western leaders have their excuse: we do not want war. But war is on, lady. Yet she sees nothing wrong in Ukrainians being killed," Landsbergis said. He insisted that Western Europeans were not unaffected by the conflict, reminding that the Russian-supported separatists downed a passenger plain over eastern Ukraine, killing 298 people, mostly from the Netherlands.

"It did not crash, it was shot down, with all the people inside, it fell down 10 kilometres while people were still alive," Landsbergis said.

The Minsk talks, which ended on Thursday in an agreement on ceasefire in eastern Ukraine , have...

The four-way negotiations in Minsk failed to settle the key issue on control of Ukraine 's borders,...

Minsk agreement: Devil's in the details

After 14 hours of tough talks, the leaders of Russia , Ukraine , France and Germany have reached...

Ukraine peace talks: What are the goals and the stakes?