BNS
aA
A small square outside the Russian embassy in Vilnius, named after murdered Russian opposition leader Boris Nemtsov, was officially opened on Friday, despite strong criticism from Russia. 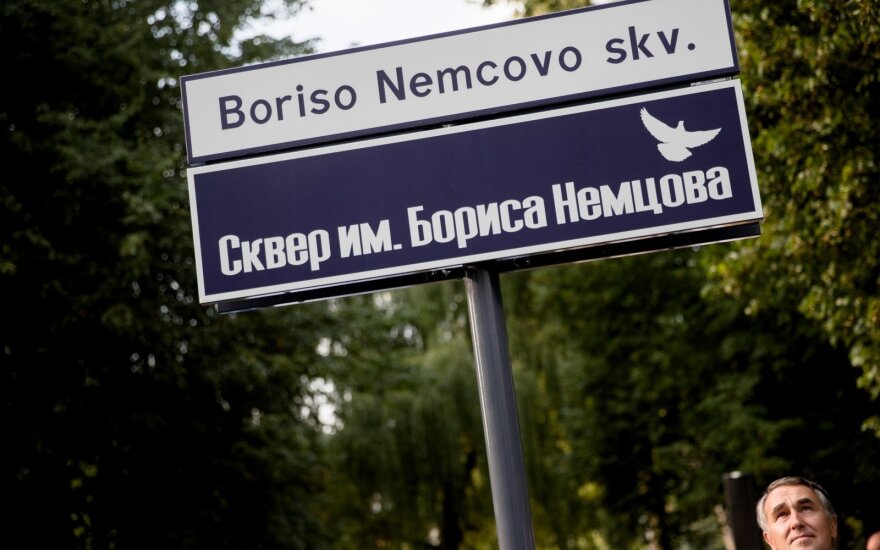 The ceremony was attended by Nemtsov's daughter Zhanna Nemtsova, Russian opposition figures and Lithuanian officials, who underlined that Vilnius becomes the second city in the world after Washington, D.C. to name a place next to Russia's embassy after the slain Russian opposition activist.

"Whatever those in the Kremlin (...) or in the building behind me say, I know that the day will come when Russia will be proud that there are Boris Nemtsov streets and squares next to our embassies in Washington and Vilnius and, hopefully, in other capitals," Vladimir Kara-Murza, chairman of the Boris Nemtsov Foundation for Freedom, said during the ceremony.

Nemtsova thanked Vilnius' authorities for the decision, saying that it was due not only to her father's tragic fate of being assassinated in central Moscow, but also because he was "a unique politician not only in Russia, but also on the global scale" who could describe the present-day situation in precise political, social and economic terms.

"He was stoic. Despite so many people resisting him (...). That's why we are standing in this square today," she said.

Vilnius' authorities named the small square in the capital's Žvėrynas neighborhood in May, drawing strong criticism from Russia. The country's ambassador to Lithuanian, Alexander Udaltsov, then said that Vilnius politicians were "aping" Washington.

Nemtsov was shot dead on a bridge near the Kremlin on February 27, 2015. The opposition leader visited Lithuania many times and was one of the most active supporters of Lithuanians during the Soviet forces' bloody attack on protesters in Vilnius on January 13, 1991 and afterwards.

A square outside the Russian Embassy in Vilnius, named after murdered Russian opposition leader Boris...

Russian opposition: Kremlin to cover up those behind downing MH17

Russian opposition activists, on a visit to Lithuania, say that the Kremlin will cover up those...

An entry ban imposed on Moscow on Lithuanian MP Emanuelis Zingeris will complicate his work on a...

Emanuelis Zingeris , a Lithuanian lawmaker appointed by the Parliamentary Assembly of the Council of...