Ludo Segers | the Lithuania Tribune
aA
Monday afternoon saw about 200 academics, political scientists, diplomats, members of the Seimas (parliament), democracy promoting think-thanks and action groups gathering in the Presidential Palace in Vilnius for the start of a two-day conference to discuss democracy or the lack thereof, particularly east of the Lithuanian border. 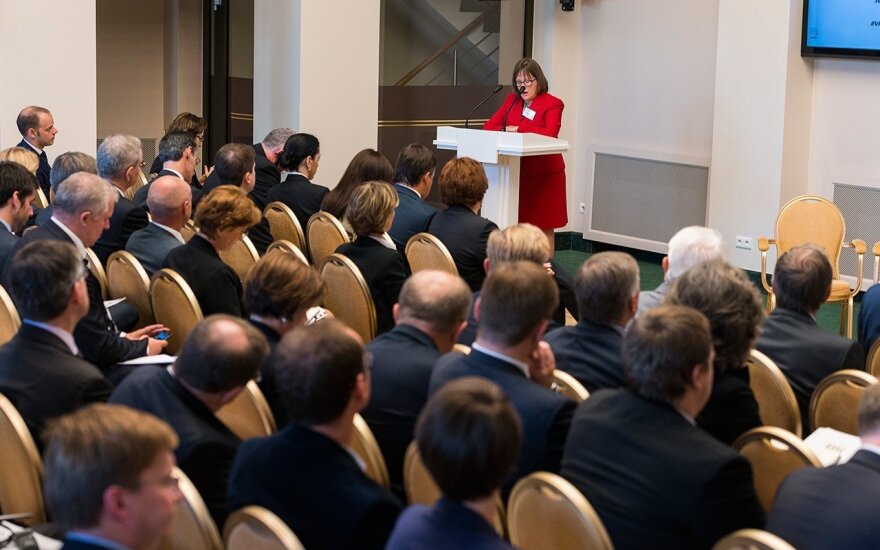 Laurynas Kasčiūnas welcomed the attendees from both sides of the Atlantic. Renaldas Vaisbrodas then delivered a word of welcome on behalf of President Dalia Grybauskaitė. Karen Dawisha, Professor of Political Science at Miami University in the USA and the author of 'Putin's Kleptocracy: Who Owns Russia?' delivered the keynote address. That book has faced many publishing obstacles in Europe in the face of what The Economist described as 'a book too far'.

She described how Putin moved fast forward in building his kleptocracy whilst the rest of he world was pre-occupied with the War on Terror. She described Russia as a 'cynical and cruel dictatorship' and 'the Kleptocracy that has mainly one export product: corruption'. 'A state-operated machine that certain elites in the West tolerate.' Ms. Dawisha also warned about Russia's leadership driving wedges between the EU and the USA and between various EU states as part of a policy that has long been in the making. That includes the support for anti-EU parties.

Elisabeth Bauer of the Konrad Adenauer Stiftung was one of a few speakers that clearly stated the objectives of her organisation as promoting democracy, particularly in Eastern Europe. The objective is to proceed in the same way German democracy was supported after WWII.

The Georgian Minister of Defence, Tinatin Khidasheli, was next. She warned to be careful in 'partnering' with Russia as the Kremlin had a very different understanding of 'partnership' from most in the West. She described some of the cruel aspects of Putin's regime, particularly the complete bulldozing of Georgian villages after the 2008 aggression against her country by Putin's operatives and replace it with Russian settlements. She pleaded for inclusion of Georgia into NATO as that will provide some of the Article 5 guarantees now enjoyed by the Baltic states.

The first of a series of panel discussions saw Gabrielius Landsbergis expressing his worries about the 'engagement' sought by some in the EU with Russia. He gave the murder of lawyer Sergei Magnitsky as a consequence of someone that initially 'engaged' with the back alley bullies in the Kremlin. Landsbergis sees a new 'wall' being build east of Ukraine. 'Where the West values rule of law, Russia rules 'by law' where theft is justifiable,' according to Landsbergis. He praised the numerous cases that have been brought against Gazprom.

Most of the panel participants addressed various issues of propaganda and censorship, the former inside and outside Russia, whilst the latter seems in control mainly in the five TV channels now under Russian state control. Media was singled out as one of the key elements in Russia dealing with opposition, but also the same media channels are required for the West to deal with Putin. Budgets are a big issue, particularly in the face of the 300 million dollar plus budget of Russia Today. In addition, there are multiple other operations funded by various Russian organisations.

Several of the guests had their own warnings. Former Foreign Minister Audronius Ažubalis made a case for 'strong leadership in dealing with Russia' as he lamented that 'many European leaders behave like little bureaucrats'. Former Prime Minister Andrius Kubilus described Russia as a gangster regime.

Evgeniya Chirikova, a Russian environmentalist, urged for the West to cut-off the Kremlin's access to funds coming from the sale of fossil fuels. That statement was then echoed by several pointing out the dismal environmental laws and damage done by oil exploration in Russia, exploration that takes place with the essential support of Western oil companies. The panelists seem to agree that the Western sanctions are having an effect. Ms. Dawisha singled out those initiated by the USA, who also 'names and shames', as being effective. About their effect on the oligarchs, Tomasz Szatkowski stated that the West 'overestimates Putin and under-estimates the role of the oligarchs, but that their combination is still intact'.

Back when the future president of Russia , Vladimir Putin , was still working at the Mayor's Office...