Valdas Adamkus: The only person I had no luck with was Vladimir Putin

(1)
DELFI EN
aA
Former Lithuanian president Valdas Adamkus expresses his disappointment about the estranged relationship with Poland, and the demands of the Polish minority. He also shares insights and memories about his own personal relations with state leaders he worked with during his presidency, while appreciating a bold yet risky stance of Lithuania's current leadership during the Russia-Ukraine conflict. 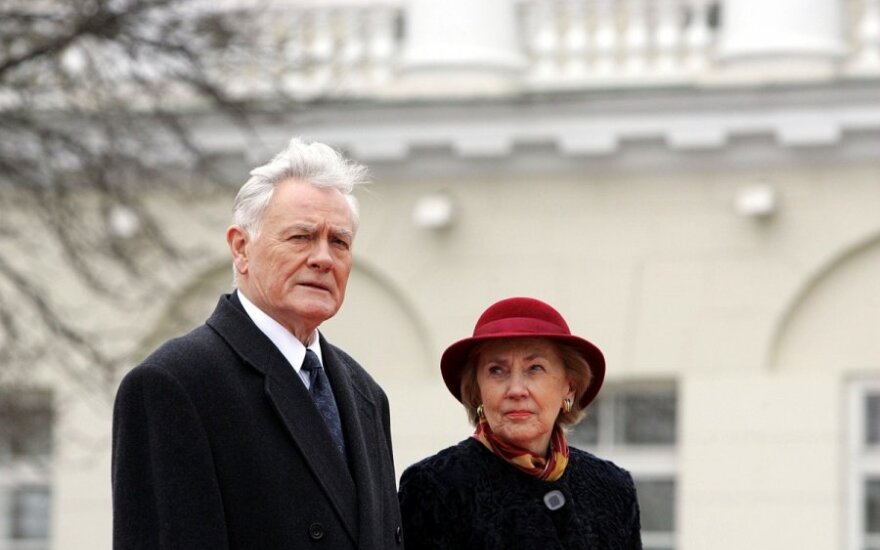 Vladimir Putin’s strange behaviour towards Adamkus in Helsinki several years ago demonstrates that the Russian leader is probably never going to forget such a stance.

The question is: do we have a joint opinion, especially on foreign policy matters? DELFI asked Mr. Adamkus

In those ten years [during Adamkus’ presidency, 1998-2009, Ed.] we practically returned to Europe, became members of the European Union and NATO. Our relationship with the heads of states was improving. There were numerous leaders of the European countries visiting Lithuania at the time. Therefore, it seemed that with these good, friendly relationships established, all we had to do now was to move forward. Unfortunately, everything has crumbled in the first five years.”

Can you please specify the period that you are referring to?

The period after me [after Adamkus’ presidency, Ed.]. For instance, the period after Poland with Aleksander Kwasniewski and then Lech Kaczynski [after their presidency, Ed.]. In any case, we should go back to 1918, when after the declaration of Independence and, in particular, after the infamy that Lucjan Żeligowski committed against Lithuania [by occupying Vilnius and the Vilnius Region with his army in 1920, Ed.], the relationship between Lithuania and Poland was ended.

This situation lasted until 1938, when all of our political and social life, including the educational school period – to look at it retrospectively – was something terrible. I remember that already in primary school the following phrase was being drilled into our heads: ‘There is a Pole sitting on a hill, with a devilish sparkle in his eye’. Young people were growing up in such an atmosphere of hatred. Personalities were formed with a slogan ‘We will not rest until Vilnius is ours’– like I was from my childhood, my youth, from my years at Jonas Jablonskis Primary School in Kaunas. After that, we suffered through 50 years of occupation together with Poland; except that we were completely erased from the global map, Lithuania no longer existed, whereas Poland became a socialist republic, but it stayed on it.

And here we are, after half a century, back up on our feet again. I have to admit that after the work that Algirdas Brazauskas began, that is smoothing out the relationship [between Lithuania and Poland, Ed.], it was quite easy for me to talk with Kwasniewski. Together, we tried to find the domains where we could hold a joint position. Poland had established itself among the NATO members earlier than we did, and Kwasniewski clearly told me: ‘Poland will act as your counsel; we will do everything to help Lithuania take its deserved place in NATO’.

We also joined our attempts in seeking EU membership; in the words of Poland, we were strategic partners then. Later, during closed sessions of the heads of EU member states held at the oval table, where seats would be allocated for representatives of each country, a succeeding President of Poland, Kaczynski, would sit next to me, as a rule. We got on very well, but there was also another reason for that. President Kaczynski did not know foreign languages too well, so he would try and stay close to me; I was his interpreter, and we would exchange our opinions – this was natural, sincere.

I recall one occurrence. At two o’clock in the afternoon, the phone rings. President Kaczynski asks if I have some time. He says that his plane will land at four o’clock, which is in two hours; he is coming to talk. I think to myself: ‘is this about some state secrets that we cannot discuss over the phone?’ By four o’clock he is already in Vilnius; we withdraw to the Narutis hotel, have dinner, talk… We discussed matters of cooperation and foreign policy, which, in my point of view, could have been easily discussed over the phone even if the Russians were listening in to our conversations. Although we talked about Russia, this was not some top-secret negotiations. Such a visit shows the warmness of our relationship and is one of the examples as to what incredible extent we managed to rebuild our relationship with Poland.

In assessing foreign policy, we knew what our aspirations were. During my presidency, for the first time in a thousand years of Lithuanian history, the monarch of England stepped onto Lithuanian soil. There was yet another symbolic occurrence: during more than 400 years of the U.S. existence, not a single American president visited Lithuania. George Bush Junior was the first… Lithuanian foreign policy had very clear boundaries, definite goals; we knew what we were striving for. I can bravely look any Lithuanian in the eyes and say that we accomplished what we believed in, and we did so with success. I do not want to criticise our current [President, Ed.], it is not my business, but…

Do you see a contrast?

I will just say that there is a difference.

I think that this [maintaining good personal relationships, Ed.] is the foundation. The exchanging of notes and conversations over the phone can never yield such fruit as personal relationships – even with certain individuals who have relatively cold personalities. For example, Tony Blair, Prime Minister of Great Britain [former Prime Minister, Ed.]: he is a pretty cold person by nature, but even with him we discovered some warm conversations [topics, Ed.] and common matters, let alone other things…

No luck only with Putin

The only person that I have had no luck with in my life is Mr. Vladimir Putin, President of Russia. Of course, the turning point [of the relationship with the Russian leader, Ed.] probably happened as we celebrated the 60th anniversary of the victory against Nazism, with massive parades and world leaders gathering in Moscow. When I received an invitation, I said strongly and clearly that I was not going to go to Moscow. Presumably, it was then that Mr. Putin’s opinion of me changed.

I recall another very interesting occurrence at a private event of the European state leaders held in Helsinki. The reception took place 30-40 km away from Helsinki, at a beautiful resort. All the leaders from the Baltic, Scandinavian, and other countries were present. Whether running late or not, Mr. Putin could not be [there on time, Ed.]; his arrival in Helsinki was scheduled about 1.5-2 hours later. We were talking in groups, waiting, and the President of Finland left for the airport to meet Putin and accompany him back to the venue of our session.

Mr. Putin comes with his wife and greets everybody as he enters the hall; then he approaches our group. Mr. Putin’s peculiarity was that he would never look people in the eyes. He would give his hand, raise his eyes and lower them again. It was not just me who had noticed that. And so, he continues with greeting us. Jacques Chirac [former president of France, Ed.] and others were standing next to me. Putin shakes hands, greets the members of our little group. Suddenly he stands in front of me. Well, I offer my hand to him, saying: ‘Zdravstvuite, gospodin prezident’('Hello, Mister President'). He takes it, raises his eyes, sees me, pulls his hand back without shaking mine, and moves aside. Chirac turns to me (we spoke in English) and says: ‘He really loves you’.

Former president Adamkus: Polish-speakers don't appreciate what they have in Lithuania (1)

The Polish-speaking minority in Lithuania do not appreciate the conditions created for them and do not...

In August six years ago, as everyone's eyes were on Beijing Summer Olympics, Russia invaded Georgia...

President Adamkus on late US-Lithuanian philanthropist Kazickas: He loved his country with deeds, not words