BNS EN
aA
United States Secretary of Defense James Mattis arrived in Lithuania on Tuesday evening on a visit, by which the US new administration aims to demonstrate its commitment to the security of the Baltic states amid concerns over Russia's foreign policies. 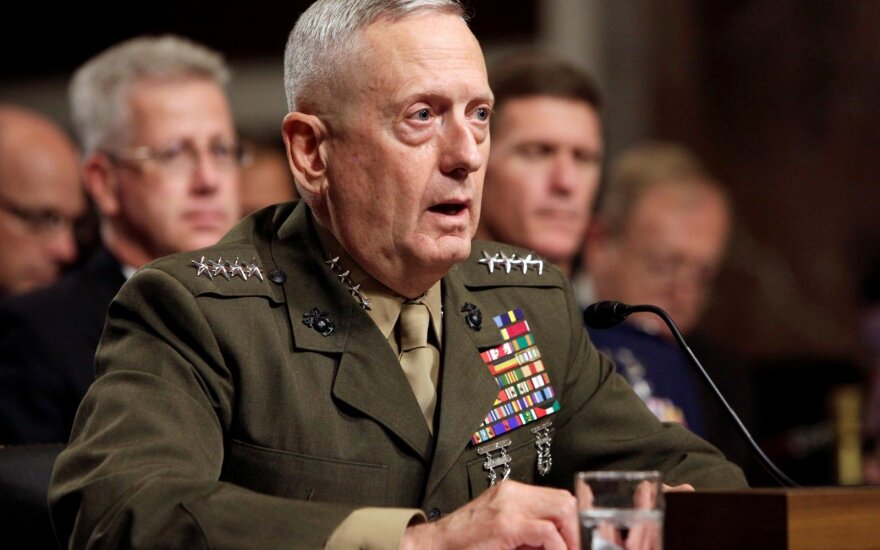 On Wednesday morning, Mattis is scheduled to meet with Lithuania's President Dalia Grybauskaitė and the defense ministers of the Baltic states in Vilnius before proceeding to Pabradė, central Lithuania, to visit troops of the US and other NATO countries.

In response to Russia's intervention in Ukraine, NATO is this year stationing an international battalion, consisting of about 1,000 troops, in each of the Baltic states and Poland. In the framework of a separate operation, a US brigade with 3,500 troops and nearly 100 tanks has been stationed in the region.

On the eve of the visit, Mattis said that NATO presence in the Baltic states helped ensuring stability.

"I want to see how the German battlegroup is doing, call on some of the countries' leaders, and pay my respects for what they're doing, and ensure that we maintain a very visible NATO presence as we basically try to reduce the opportunity for miscalculation by anyone and buy time for the diplomats to - to restore tranquility and stability up in the Baltics," the US secretary of defense told journalists in Denmark.

Lithuanian officials expect US decisions on permanent deployment of troops and assistance in consolidating the Baltic air defense, as well as faster decision-making processes within NATO.

A wave of concerns rippled across Eastern Europe last year after Donald Trump who was later elected to the US White House downplayed NATO during his election campaign, dismissing the Alliance as outdated and linking defense commitments to the size of defense spending.

After his election as president, Trump changed his rhetoric about NATO, however, has been continuously emphasizing that European nations should boost defense spending, calling upon the Alliance to shift its focus to efforts against terrorism.

The three Baltic states have lately been presented as an example of defense spending, with Estonia earmarking 2 percent of its gross domestic product (GDP) for defense purposes for years and Lithuania and Latvia planning to reach the indicator next year.

Mattis, a retired general nicknamed "Mad Dog", was the chief of the US Armed Forces Central Command who was in charge of the US wars on Iraq and Afghanistan.

He arrived at the Vilnius airport from Denmark and was greeted by Lithuania's Defense Minister Raimundas Karoblis, the minister's adviser Vita Ramanauskaitė told BNS.

From Lithuania, the US secretary of defense will fly to London on Wednesday afternoon.

US Defense Secretary Mattis to come to Lithuania next week

US Secretary of Defense James Mattis is coming to Lithuania next week.

United States Secretary of Defence Jim Mattis , one of the highest-ranking officers of the US...

Durbin in Vilnius: Russia is a threat, but there's no need to slam doors on it

The United States should not completely abandon cooperation with Russia, but it must be remembered...

In her congratulatory message to the German -led NATO battalion in Lithuania, Germany's Defence...