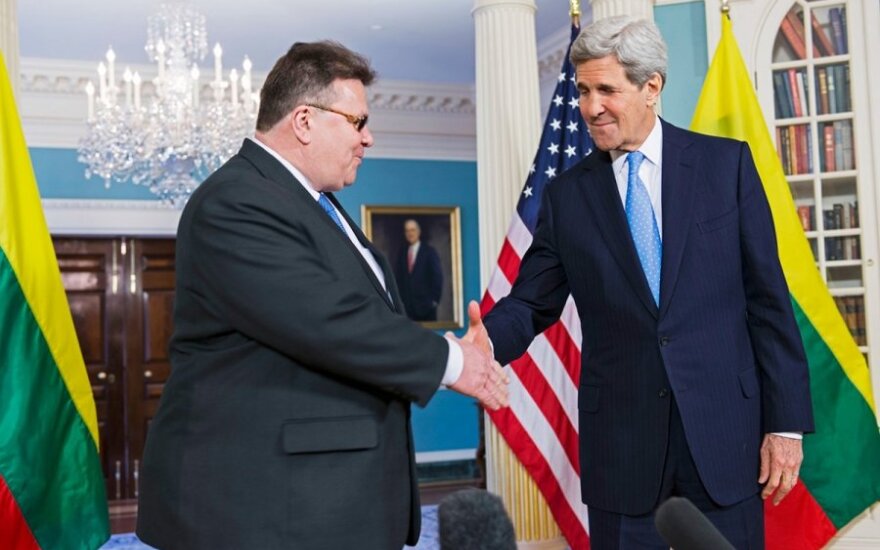 The two discussed a number of issues dealing with security, economic development and information. Specifically support for Ukraine, the Minsk Agreements, and the United Nations Security Council were on the agenda as Minister Linkevičius and Secretary Kerry discussed ways to prevent further escalation of Russian aggression and US support for Lithuania's accession to membership of the Paris-based OECD.

During his opening remarks Secretary Kerry praised Lithuania's progress the last 25 years: "We respect the great achievements of Lithuania since independence and we ensure that the US always will remain your friend."

Mr. Kerry pointed out that "Lithuania as a NATO ally is also a strategic partner". And assuring that the US holds sovereignty and territorial integrity very high, he added: "I can confirm that the United States holds Article 5 obligations firm and unquestionable." Secretary Kerry expressed his appreciation for Lithuania's efforts to stepping up its efforts for energy diversification as an important part of strengthening its independence.

Describing the symbolic importance of the meeting, Minister Linkevičius thanked the USA for support and the non-recognition policy for more than 50 years during Soviet occupation. He underlined the importance of US support to access NATO, this on the eve of the 25th anniversary of re-establishment of Lithuania's independence. The Minister said, "I’m very grateful for that strategic partnership now and for implementing decisions which were taken at the NATO summit in Wales. Preventing the further spread of Russian aggression is necessary." He added, "Being part of that security family has a direct influence to the security guarantees of our country."

The minister asked also for "more leadership of the United States in solving problems around Ukraine" pointing that "it was more than about the fate of that country as it is also about credibility and what we do during the aggression against a sovereign country and containing Russian aggression."

Ambassador Žygimantas Pavilionis summed up the successful meeting thus: "This was an important strategic meeting of two strategic allies and both were able to address all points on the agenda and most important agreed on all the issues."

During the visit, the Lithuanian Foreign Minister also met with Mike Carpenter, advisor to US Vice President Joe Biden and Karen Donfried, President of the US German Marshall Fund where they discussed with a team of experts European security issues and Ukraine.

Five American Abrams tanks to be deployed in Lithuania (2)

Five American Abrams tanks and several dozen other vehicles will be deployed in Lithuania, the Baltic...