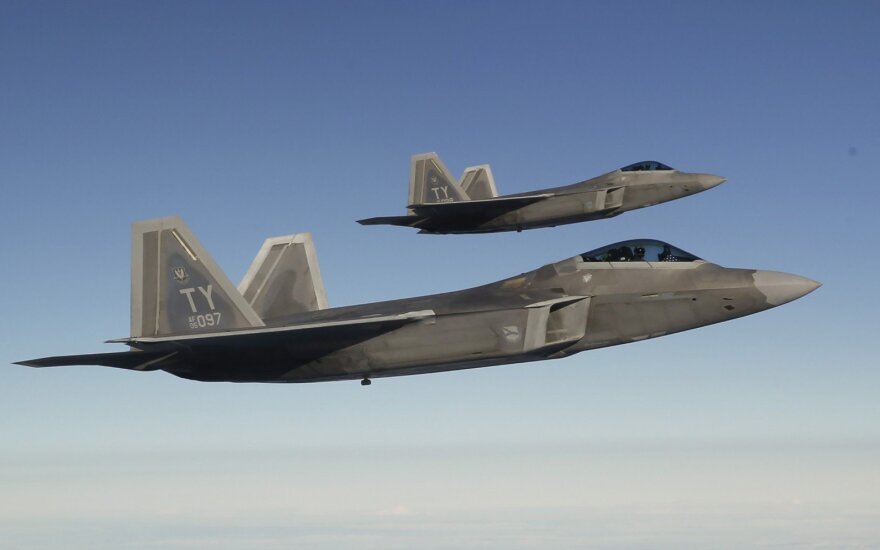 With Lithuanian President Dalia Grybauskaitė present, the fighter-jets landed in the Lithuanian Air Force Aviation Base in Šiauliai, northern Lithuania, which is home to the NATO air-policing mission.

"The arrival of one of the most modern US fighter-jets in Lithuania today has shown the US' capacity to quickly and efficiently ensure airspace defense. It is a signal that the Alliance is ready and capable of deterring any type of threat," Grybauskaitė said at the welcoming ceremony

The unannounced visit came in response to tensions caused by multiple incidents involving Russian fighter-jet maneuvers near US vessels and airplanes in the Baltic Sea. The Russian military says the maneuvers were nothing out of the ordinary and constituted no threat.

Grybauskaitė said that Russian aggressive actions, the buildup of weapons around Lithuania's borders, and the political will to use force are all existential threats, as the situation in Ukraine has made clear.

Formally put into service in 2005, the F-22 Raptor performed its first combat sorties during the American-led intervention in Syria and Iraq.

The US Air Force has about 180 F- 22 Raptors. The US Congress has banned the sale of these aircraft to foreign countries.

Why is Russia harassing US aircraft?

Since Russia annexed Crimea in 2014, tension with the West has been high, affecting eastern...

Based on the implementation of Russian deterrence, a tank and AFV brigade from the United States has...

The Polish Air Force is taking over NATO's Baltic air-policing mission from the Royal Netherlands...