BNS EN
aA
Kurt Volker, the US special representative for Ukraine, says that he has hope that a fresh ceasefire between Russia-backed separatists and Ukrainian forces can be reached in eastern Ukraine for the back-to-school season. 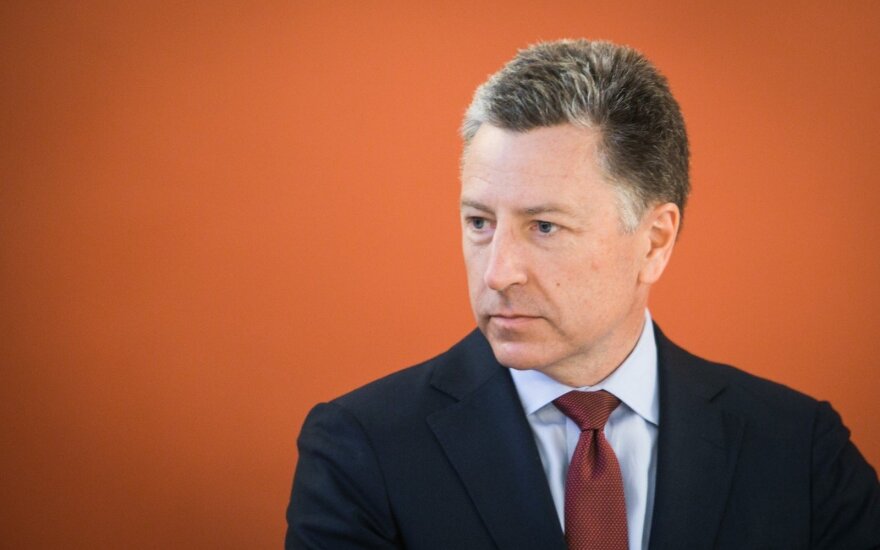 The US diplomat said this in Vilnius a day after his first meeting with Vladislav Surkov, an aide to Russian President Vladimir Putin, in neighboring Belarus.

In an exclusive interview with BNS, the US diplomat also said that active discussions are currently ongoing in Washington about a possibility of sending lethal weapons to Ukraine and described the EU's reaction to fresh US sanctions on Russia as "a little overdone".

BNS: Mr. Ambassador, you came to Vilnius from Minsk where you met Russia's presidential aide Mr. Surkov. He said you discussed some fresh ideas. Did you talk about any new initiatives?

Volker: It was a first meeting and I think it was a constructive meeting. We had a chance for me to hear some of the Russian perspectives and for me to lay out some of our perspectives.

We also talked that the Minsk process, the Minsk agreements are very important and they need to be implemented, but right now we are not going anywhere. They are just stuck in a circle. What we need to do is to take a fresh look how to increase security in Ukraine for the people that live there. And that would allow, we would hope, withdrawal of Russian forces and would allow a political process to go forward that would make sure that the people there feel confident and comfortable in a democratic system that they would be in.

There is one specific thing we did not spend much time talking about in our meeting with Mr. Surkov, but I know it's very high on the agenda in the Normandy process, which is to have a ceasefire for the back-to-school season to see whether we can have a fresh start on the ceasefire. It seems like a very good idea and we would obviously fully support that and hope the sides could do that. It goes in line with this idea that we've got to make improvements in security if we want to get to the stage of some of the political process that Russia cares about.

BNS: Will the US send lethal weapons to Ukraine?

Volker: That's a decision that has not yet been made; it is under active consideration in Washington. I know some of the arguments against it, and I don't think those arguments stand up very well. At the same time, it needs to be very well staffed and planned and worked out and that's the process that is ongoing.

BNS: Did you talk to Mr. Surkov about the possibility of reducing or increasing sanctions?

Volker: We talked about sanctions tangentially as a fact; there are sanctions against Russia because of its involvement in Ukraine and they won't be lifted unless Russia fulfills its obligations and withdraws from Ukraine. So we didn't really talk much about it other than we know they are there and we know what Russia needs to do.

BNS: The EU has expressed concern over fresh US sanctions on Russia. What is the situation now?

Volker: On the EU reaction, I think it was perhaps a little overdone. First, there was complaint about the US not coordinating sanctions with the EU. Remember that this was not the administration that initiated this effort on sanctions, it was the Senate and the House, and so there wasn't any coordinating the administration could do. Second, once there was a version of this bill that passed in one of the chambers, the Senate, then the administration had concerns about some of the pieces of legislation which were the same as European concerns about the extraterritorial application to European companies, about the degree of discretion the administration would have in implementation. So these were things that were not an area of difference between Europe and the US, (but) actually the areas of similarity between the administration and Europeans, and the administration was largely successful in getting the law changed so that the final version that was then approved by the House and then by both chambers addressed a lot of the European concerns which were also the administration's concerns. So I think the concerns expressed were maybe overstated and I think right now the critical thing is to make sure that there aren't any gaps in the EU and US application of sanctions that we try to make as uniform a position as possible.

BNS: From Vilnius, you are going to Kiev. What is your message to Ukrainian authorities regarding the implementation of the Minsk agreements and are they doing a good job not isolating people living in the Donbass territories that are not controlled by the government?

Volker: On the Minsk process, I certainly understand why they can't do certain things when there has been no improvement in security. What I think we would encourage Ukrainians is be prepared. If we can bring about improvements on security and an understanding or an agreement with Russia about withdrawing their forces, Ukraine should be prepared to move forward on political process as the Minsk agreements talk about. So be ready doesn't mean do it now, but it means be ready.

I completely agree with your point and I think that it's very important that Ukraine reach out to all the people in the Donbass and try to help them in whatever ways they can to let them know that the government in Kiev values them as Ukrainian citizens and should make every effort to help provide for them as best they can. The only thing that should stop Ukraine from doing that are Russian forces. Anything short of that Ukraine should be trying on its own whether it is access to pension payments, information, news, education, healthcare. All of these things, I think, it is in Ukraine's interest to show the people in that region that they are doing everything they can.

BNS: Do you think the upcoming Russia-Belarus Zapad drills are a reason for Ukraine and the Baltic states to be concerned?

Volker: It's a big exercise and it've gotten bigger over recent years. You know, I don't think that, I certainly hope there will not be anything that arises as an immediate security issue as a result of the exercise, but it is worth paying attention to capabilities that Russia is amassing and it's also worth paying attention to what Russia's actions are in different conflicts to asses their intent and to make sure we are doing what is necessary to be able to deter Russia if necessary, while also looking for solutions to these issues that we can stabilize things.

German President Frank-Walter Steinmeier is expected to visit Lithuania this week, the Lithuanian...