Eglė Samoškatė,
DELFI EN
aA
During a visit to Vilnius, U.S. Mission to NATO DCM Lee Litzenberger acknowledged that the hybrid war Russian President Putin is fighting in Ukraine has prompted discussions about how Article 5 of the Washington Treaty can be applied. And these questions have no answers yet. 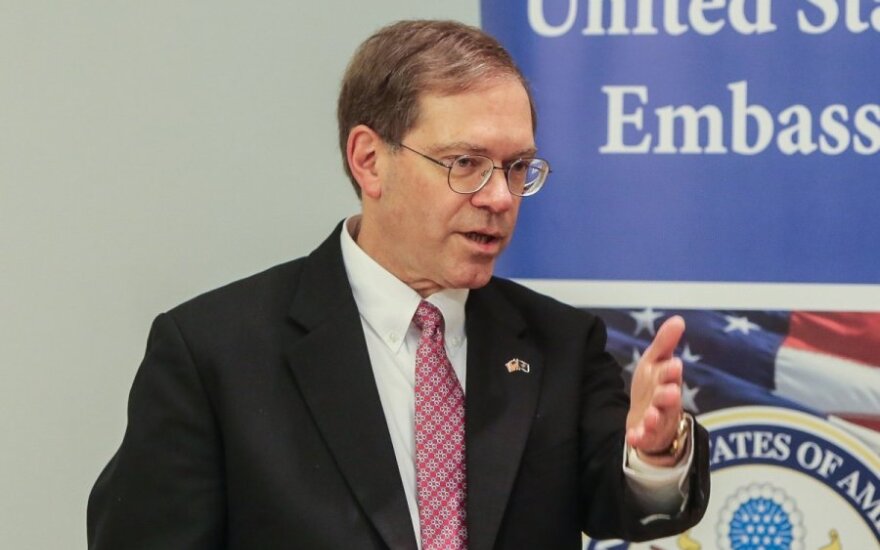 Article 5 of the Washington Treaty reads: “the Parties agree that an armed attack against one or more of them in Europe or North America shall be considered an attack against them all and consequently they agree that, if such an armed attack occurs, each of them, in exercise of the right of individual or collective self-defense recognized by Article 51 of the Charter of the United Nations, will assist the Party or Parties so attacked by taking forthwith, individually and in concert with the other Parties, such action as it deems necessary, including the use of armed force, to restore and maintain the security of the North Atlantic area.”

How can one define an attack under the Washington Treaty when an aggressor carries out hybrid but not conventional war? A student asked this question to Mr. Litzenberger at the Vilnius University Institute of International Relations and Politics.

“It is the $60,000 - or better yet, the $2 million - question for NATO. If I am correct, Article 5 of the Washington Treaty refers to an armed aggression. It was drafted during a period when more conventional threats” were considered, Litzenberger said. “This is one of the reasons why hybrid warfare has posed certain challenges. NATO has started discussions about the conditions under which Article 5 should be considered applicable. Currently we do not have an answer to that.”

On Thursday, UK Defense Secretary Michael Fallon said he was worried that Putin might use the same undercover war strategies as in Ukraine to destabilize the situation in Lithuania, Latvia and Estonia. Fallon said he believes the threat is very real.

In an interview with DELFI after a public lecture, Litzenberger noted that the UK and the U.S. have a similar understanding of the situation in Eastern Europe. However, he said, the potential for hybrid warfare, which could start if pro-Russian people demonstrate in the streets and take over official buildings, underscores the need for national government and national structures to be the first to respond.

“In the hypothetical situation you’re talking about, I think first and foremost, it’s the national response; it’s going to be up to your government to take the first steps,” Mr. Litzenberger said. “We want to support all governments in the region to be able to respond to situations like that, but I think it’s very hard to tell based on your scenario, what you would be talking about. First and foremost, we would look to engage with the Lithuanian government to talk them, to gain a better understanding of what you think is going on and then take it from there.” 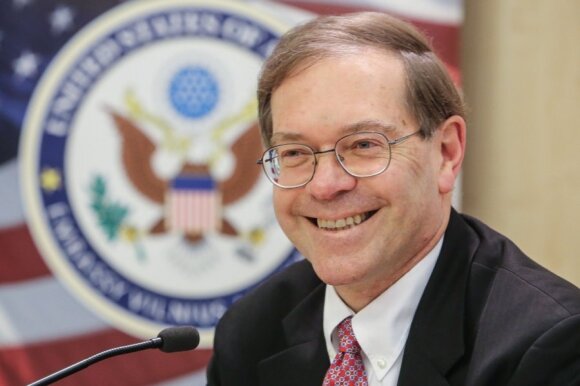 He stressed that there is no doubt the Alliance would demonstrate its unity in the event of aggression against any NATO member. He argued that the U.S. and EU countries reached agreement on the necessity to impose sanctions on Russia. And, according to Litzenberger, all allied countries agree on deterrence measures – intensified trainings in Eastern Europe, the establishment of the Very High Readiness Joint Task Force and others.

“What I have seen is that the challenges that we’ve seen coming from Russia have really enhanced solidarity both in the EU and in the NATO Alliance,” the U.S. diplomat said.

“I think what’s going to be is what you see NATO doing right now, which is taking measures to both reassure allies that have some concerns about these kinds of threats, and also to demonstrate to potential aggressors that taking aggression against one NATO ally would mean taking on the entire NATO Alliance,” he said. “That would create a strong deterrent message. And the purpose of that message is to prevent such a situation from taking place.”

He said that despite much talk of hybrid warfare, it is just the same warfare with slightly different tactics.

“Some of the ideas we have seen have been in use for hundreds of years and thousands of years. As much as anything, it’s taking the steps that we need and governments individually need to take to be able to understand what’s happening when an incident occurs. That then allows us to respond more quickly. If we spend a lot of time asking questions, what is actually going on, that can delay the response,” the U.S. diplomat said. “So what we are doing is trying to position the Alliance to be able to respond more quickly to incidents of whatever kind as they are developing.”

Nevertheless, Litzenberger added that geographically Russia will remain an important factor in the region. And sooner or later, Allies will have to develop methods to interact with Russia constructively.

“Currently Russia does not look like partner, but, at the same time, we do not want to see Russia becoming a threat. And in the long run we will have to take Russia’s geographic position into account when working on Europe’s security architecture,” Litzenberger said.

“An unfortunate fact is that Russia has challenges in its relations with almost all of the European countries it has borders with. In the long term, we do not think that European security can be strengthened with frozen conflict zones existing in the region, as well as Russia striving to dominate and dictate to neighboring countries,” he explained.

Litzenberger said the West will remain open to cooperating with Russia, as soon as it proves through its deeds, not its words, that it is ready to respect the European security structure that was formed after the World War II.