(1)
BNS EN
aA
The Baltic countries are setting an example for all NATO member states in increasing their defense budgets, US Defense Secretary James Mattis said on Wednesday after visiting the Alliance's troops stationed in Lithuania. 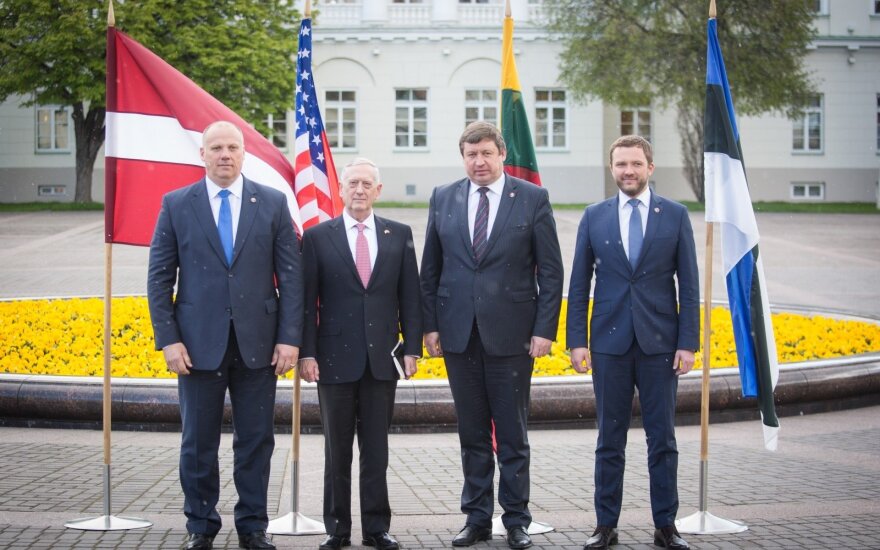 "These nations are a model for the trajectory they are taking in their defense spending. They are serious about it. They are setting an example of growing their defense," Mattis told reporters in Pabradė, a training ground close Vilnius.

Estonia is currently one of the five NATO member states that spend the required 2 percent of its GDP on defense. Lithuania and Latvia expect to meet this target next year.

Speaking after a meeting with the Lithuanian, Latvian and Estonian defense ministers, Mattis underlined the importance of the unity of NATO in responding to security challenges, including Russia's planned Zapad military drills.

The Pentagon chief said that the deployment of NATO's battalions in the Baltic countries and Poland "shows the way NATO can be interoperable and our troops can come together and work together and if necessary fight together".

"NATO is very visible as you see here today, but it's also indivisible when it comes to its partnership with each other. We are unified as an alliance," he said.

In response to Russia's intervention in Ukraine, NATO this year is deploying a multi-national battalion of around 1,000 troops in each of the three Baltic countries and Poland. In a separate mission, a US brigade of 3,500 troops and nearly 100 tanks has also been stationed in the region.

Germany leads the brigade in Lithuania, Canada in Latvia, Britain in Estonia, and the United States in Poland.

Lithuanian and US officials say that the US may temporarily deploy Patriot long-range air defense systems, which are capable of bringing down aircraft or ballistic missiles, in Lithuania this summer.

The US defense secretary and Lithuanian Defense Minister Raimundas Karoblis neither confirmed not denied these reports.

"The specific systems that we bring are those that we determine necessary," Mattis said.

The Lithuanian Armed Forces currently only have short-range aircraft defense systems and have decided to purchase Norwegian medium-range systems NASAMS.

A wave of concerns rippled across Eastern Europe last year after Donald Trump said during his presidential election campaign that NATO was outdated and linked defense commitments to the size of defense spending.

Trump softened his rhetoric on NATO after his election as president. However, he always underlines that Germany and other European countries have to step up their defense spending and that the Alliance has to put greater focus on the fight against terrorism.

Mattis, a retired general nicknamed "Mad Dog", was the chief of the US Armed Forces Central Command and was in charge of US troops in Iraq and Afghanistan.

United States Secretary of Defense James Mattis arrived in Lithuania on Tuesday evening on a visit,...

US Defense Secretary Mattis to come to Lithuania next week

US Secretary of Defense James Mattis is coming to Lithuania next week.

Karoblis about "Zapad": there are no visible signs that it would be a prelude to a serious conflict