BNS EN
aA
United States Secretary of Defense James Mattis said in Vilnius on Wednesday that the US was ready to deploy defense systems in the Baltic states to deter Russia, however, has given no comment on the possibility to bring long-range defense systems Patriot. 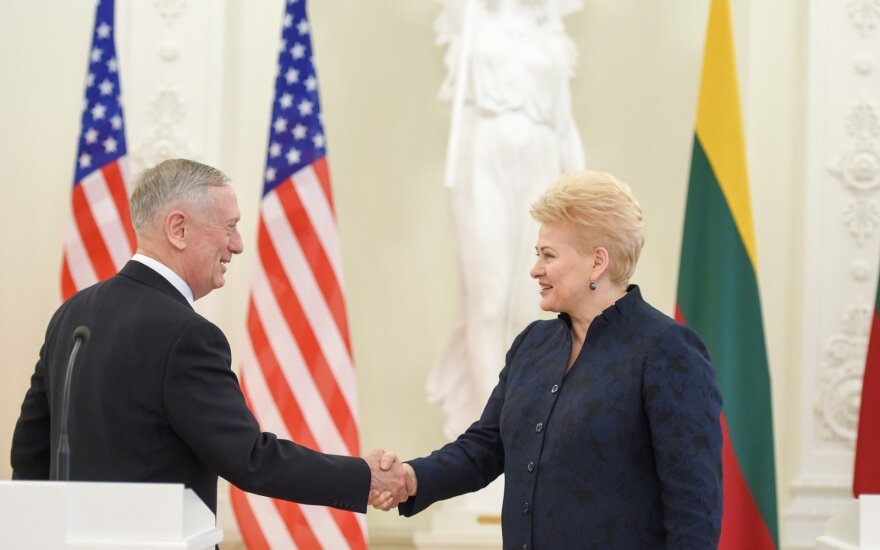 President Grybauskaitė meets the US Secretary of Defense James Mattis

"We will deploy only defensive systems to make certain that sovereignty is respected," Mattis said at a news conference in Lithuania after meeting with the country's President Dalia Grybauskaitė.

He emphasized that NATO capabilities in Eastern Europe were exceptionally defensive, dismissing built-up of Russia's military power in the region as a destabilizing factor.

"The specific systems that we bring are those that we determine necessary. I think any buildup of Russian combat power in an area where they know and we all know they are not threatened by anything that we are doing in Lithuania or elsewhere in the democratic countries. any kind of buildup like that is simply destabilizing," said the secretary.

Related articles
US secretary of defense Mattis arrives in Lithuania
State Defence Council suggests 2.07% of GDP for defense in 2018

Air defense of the three Baltic states is one of the regional weak spots in terms of defense. Some officials argue that NATO Allies could station long-range defense systems Patriot in the region in response to Russia's increased military activity. Patriot is capable of bringing down aircrafts and ballistic missiles.

Defense officials maintain that NATO could step up air defense systems in the Baltic states during the large-scale Russian and Belarusian military exercise Zapad this fall.

Grybauskaitė, the Lithuanian president, said the Baltic states needed additional security measures but did not specify any details. In her words, all decisions will be made in consultations. She also called for a faster decision-making process within NATO.

The visit is aimed at demonstrating the US new administration's commitment to the security of the Baltic states amid concerns over Russia's foreign policies. Later on Wednesday, Mattis will visit troops in Pabradė, central Lithuania, with the defense ministers of Lithuania, Latvia and Estonia.

In response to Russia's intervention in Ukraine, NATO is this year stationing an international battalion, consisting of about 1,000 troops, in each of the Baltic states and Poland. In the framework of a separate operation, a US brigade with 3,500 troops and nearly 100 tanks has been stationed in the region.

A wave of concerns rippled across Eastern Europe last year after Donald Trump who was later elected to the US White House downplayed NATO during his election campaign, dismissing the Alliance as outdated and linking defense commitments to the size of defense spending.

After his election as president, Trump changed his rhetoric about NATO, however, has been continuously emphasizing that European nations should boost defense spending, calling upon the Alliance to shift its focus to efforts against terrorism.

The three Baltic states have lately been presented as an example of defense spending, with Estonia earmarking 2 percent of its gross domestic product (GDP) for defense purposes for years and Lithuania and Latvia planning to reach the indicator next year.

Mattis, a retired general nicknamed "Mad Dog", was the chief of the US Armed Forces Central Command who was in charge of the US troops in Iraq and Afghanistan.

United States Secretary of Defense James Mattis arrived in Lithuania on Tuesday evening on a visit,...