BNS
aA
US President Donald Trump has signed a law on the country's defense budget for the next year, adopted by the Congress. Among other things, it includes a call to change NATO's Baltic air policing mission's mandate into that of an air defense mission. 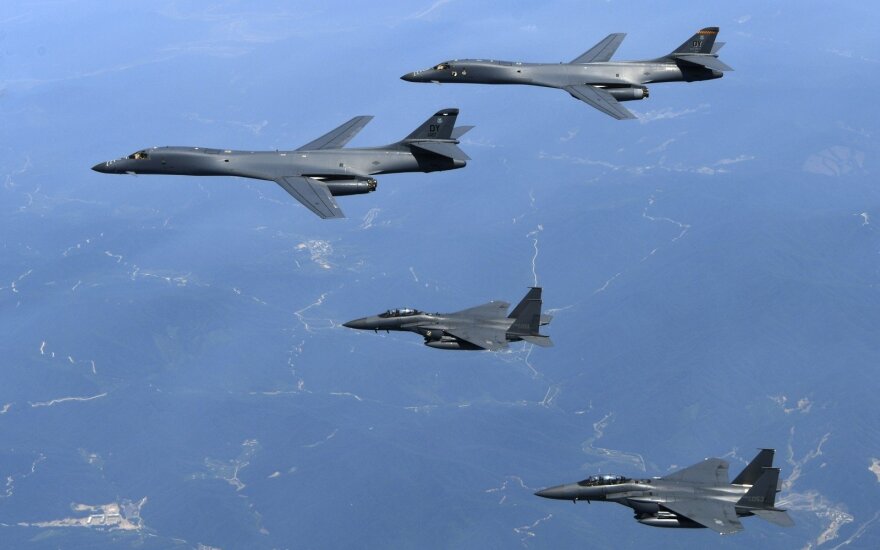 Signed on Monday, the law states that the American political and military leadership should "explore transitioning the Baltic air policing mission of NATO to a Baltic air defense mission".

Lithuanian officials have raised this issue during meetings with allies for several years now, seeking to plug air defense loopholes as it’s one of Lithuania's major defense weaknesses.

"This is not a NATO document. (…) With no doubt, these are US guidelines but they will have major impact on the planning of NATO forces," he told the national radio LRT.

Vice Minister of National Defense Vytautas Ubrasas says a major challenge will be to ensure support of other NATO countries for changing the air policing mission's mandate.

"Perhaps not all countries will back that. But, frankly, the US call in this defense budget law (…) would be great support for us," he said.

He also suggested that fighter jets stationed at the Šiauliai base could be integrated into the Lithuania-based international NATO battalion as an air support unit.

The air policing mission's transition to an air defense mission would mean that fighter jets stationed in the Baltic mission for air policing would be able to carry out combat tasks in case of a crisis.

NATO has been carrying out the Baltic air policing mission since 2004 when Lithuania, Latvia and Estonia joined the Alliance.

The new law, signed by President Trump, also includes a call for lawmakers to continue supporting the Baltic states. The document said such support should include "continuous and enduring presence of United States forces, training and support activities of United States special operations forces, and increased joint training and exercises to deter aggression, promote interoperability, build resilience, and enable NATO to take collective action if required".

Lithuania has so failed to convince the United States to re-deploy American troops for permanent presence in the country.

A company of American troops in each of the three Baltic states were station from 2014 when Russia annexed Crimea until the fall of 2017 but the American troops were withdrawn after international NATO battalions were set up in Lithuania, Latvia and Estonia.

Now American troops come for training from their brigade deployed in Poland.

Under the new American law, the country's defense budget will stand at 716 billion US dollar next year.

Major Thomas O‘Boy was on Monday accredited as the United Kingdom 's new defense attaché to...

Lithuanian Minister of Foreign Affairs Linas Linkevičius on Tuesday called for remembering the...

Braun takes over as commander of NATO battalion in Lithuania