www.lrt.lt
aA
Attacks in Brussels last week were not an assault against NATO, US Ambassador to the North Atlantic Council Douglas Lute tells LRT television. He visited Lithuania last week as part of a NATO delegation ahead of the summit in Warsaw this summer where Lithuania and other eastern Alliance members are seeking greater NATO presence in their territories. 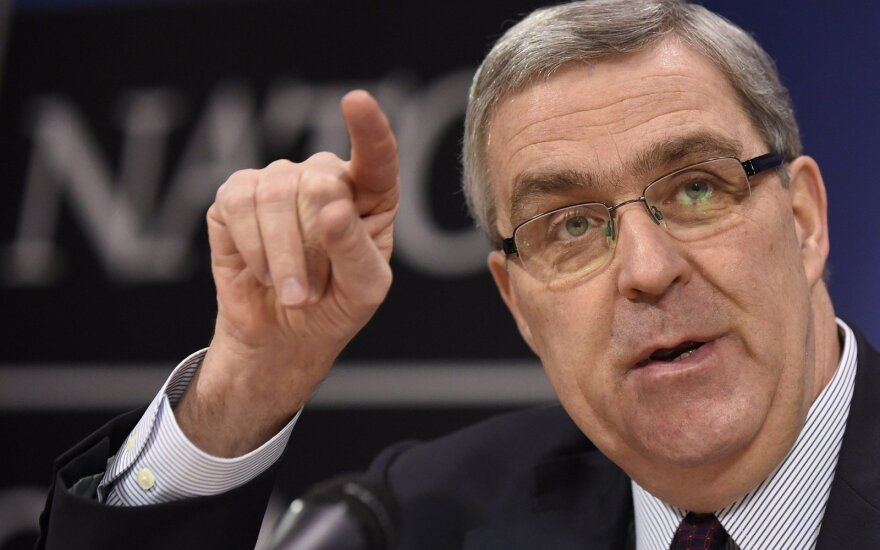 What do you think of the attacks in Brussels? Some believe that these attacks were a symbolic attack on NATO, since its headquarters are located near the airport.

I see no direct connection. It's a coincidence that the attacks at the airport happened just a few kilometres away from NATO's headquarters. That was an attack on civil rights and open societies. This is what our transportation system symbolises. That's why they target open, public spaces like airports and metro stations. We saw attacks in public spaces in Paris relatively recently as well. Terrorists can sow fear there, they want to show that nobody anywhere can be safe. That was their main goal, so it wasn't a direct attack on NATO.

First of all, I'd like to emphasize that the summit meeting will be a very important date in the history of NATO. This is because it will be held in the context of a changing security environment. NATO must face these new challenges and provide many answers at the Warsaw summit. Regarding the political situation in Poland, I can say that the Alliance has 28 democracies and 28 flavours of democracy. The aforementioned 28 states are sovereign states. I have nothing special to say about Poland's political situation and I don't think that it will affect the summit meeting in Poland. Those decisions are being made by the Polish sovereign government.

Can you predict any results of the Warsaw meeting?

There are 100 days left until the meeting, so I can't exactly predict what the results will be. It is clear, however, that the process that began in the summit meeting in Wales in August of 2014 to show NATO's primary reaction to Russian aggression and new security challenges will continue. Now – two years later – we will see a lot of changes in Warsaw. Just a few minutes ago, your president and I discussed modern deterrence. What should it look like in the 21st century? We know what it has been like in Europe throughout history, but what should it look like now? The answers to these questions will be the most important results of the Warsaw meeting. I can't predict the results, you will have to come to Warsaw and then I will be able to say more specifically.

Well, as the United States of America's ambassador, I cannot deny that America's military power is the greatest in the Alliance. I already mentioned, however, that the Alliance has 28 states. Every one contributes according to its means. In Lithuania's case, we see results. Your special operations forces are very effective and they have experience in Afghanistan. Lithuania is contributing as it can. It's just as important that you are prepared to invest. Lithuania is one of few Alliance members that have shown a clear move towards reaching the 2 percent of GDP mark for defence expenditures. Speaking of these expenditures, you are first in the Alliance in defence spending on new investments. You are spending your money not just on personnel and operations, but on new weapons. The portion of money being spent this way exceeds 20 percent, which is one of the best numbers in the Alliance. I think that Lithuania's national actions clearly show that your leaders understand that the security situation has changed. We value that and consider Lithuania to be a leader in this field. As for Europe, I'll repeat that among NATO's 28 member states there are different economies, and the general situation within the Alliance varies. Not all of the members hold to the 2 percent obligation. Not all of them chose to strive for it the way Lithuania has. Lithuania has said that Lithuania will reach this goal by 2018. The president assured me of this. Not every alliance member holds such a determined position. All of the members made this promise at the Wales summit, but Lithuania is in the lead when it comes to fulfilling it.

After all of the attacks that have occurred in Western Europe, do you think there are any opportunities for Russia and NATO to work together?

There must be balance here. NATO does what it must to fulfill its obligations to all 28 member states. It's the fifth article which states that an attack on one member is an attack on all. This is our internal obligation. That is what we will do. We took our first step in the Wales summit and there will be more in Warsaw. We will do everything that is needed. On the other hand, NATO's most powerful neighbour, in the military sense, continues to be Russia, the geography will not change. We must find a balance between what we must do for ourselves and the fact that Russia is our neighbour. NATO has always held these two perspectives. Strength on the one hand and openness to dialogue on the other.