Unexpected words to Grybauskaitė from Trump and Macron

EN.DELFI
aA
The NATO summit meeting could have ended in failure – there were talks about US President Donald Trump's ultimatum of withdrawing from the Alliance. However, after tense minutes of a closed meeting, the American's moods changed. The Lithuanian president was among those, who received thanks for such a successful conclusion. 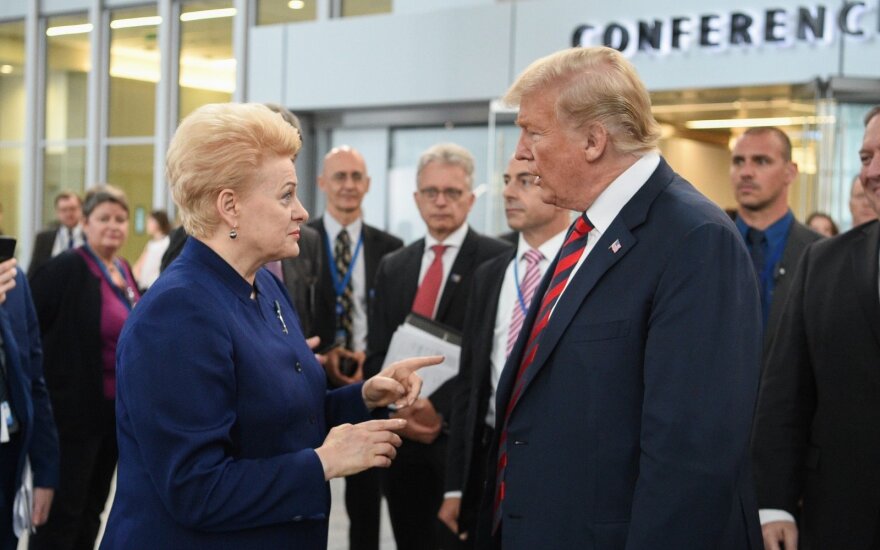 The stormy unplanned Thursday morning meeting of NATO member states' leaders, where D. Trump lashed out at Alliance countries not financing their defences sufficiently led to talks about an unexpected crisis. Apparently, the US president threatened with withdrawing from the Alliance. With the storm having passed, more details are reaching the public on what occurred at the summit meeting and who helped salvage it.

Vilnius Policy Analysis Institute analyst Marius Laurinavičius believes that it is specifically the Lithuanian head of state who is to thank for the resolved crisis in Brussels.

While the stunned leaders of some European countries remained silent and Danish Prime Minister Lars Lokke Rasmussen admonished D. Trump for Danish casualties in a US-led war, according to sources, it was specifically Lithuanian President Dalia Grybauskaitė, who stepped in as a mediator.

It appears she managed to convince the US president that the Alliance countries realise the importance of sharing the burden. Furthermore, with messages about "D. Trump's ultimatum to withdraw from NATO" reaching the public, she was the first to deny such rumours to the Reuters news agency and calmed the atmosphere somewhat.

The sources' information and official statements from D. Grybauskaitė were later indirectly, but in front of cameras evaluated by D. Trump himself.

"Excellent work!" D. Trump noticed the Lithuanian president passing by in a hall. D. Grybauskaitė gave thanks for the US president's pressure, which benefits small countries. "You have an excellent representative," the US president praised, turning to journalists.

As if his oft-expressed praises were not enough, later French President Emmanuel Macron also publically praised the Lithuanian head of state. Noticing D. Grybauskaitė talking with Armenian Prime Minister Nikol Pashinyan, E. Macron stepped in to demonstratively thank the Lithuanian for her containing the situation in the morning meeting.

"I wanted congratulate you for your work," E. Macron said, winking at D. Grybauskaitė. To the clearly confused Armenian prime minister, the French head of state explained that in the morning, the Lithuanian leader convinced D. Trump with a strong statement, which was more convincing than those of France or Germany.

"I did appreciate it as always and I will be here, as you know," E. Macron emphasised.

US President Donald Trump says he might discuss American troops' training in the Baltic states...

Lithuanian president wishes Trump to be unpredictable with Putin

Lithuanian President Dalia Grybauskaitė says that on Wednesday she wished US President Donald...

Lithuanian President Dalia Grybauskaitė says she is concerned about the upcoming meeting between US...