(2)
Tomas Dapkus | Alfa.lt
aA
More and more evidence points to the fact that Kremlin-supported terrorists shot down the Malaysia Airlines passenger plane. Alfa.lt has interviewed the owner of the trailer-truck that allegedly transport BUK rockets, one of which downed the MH17 flight, from Ukraine. 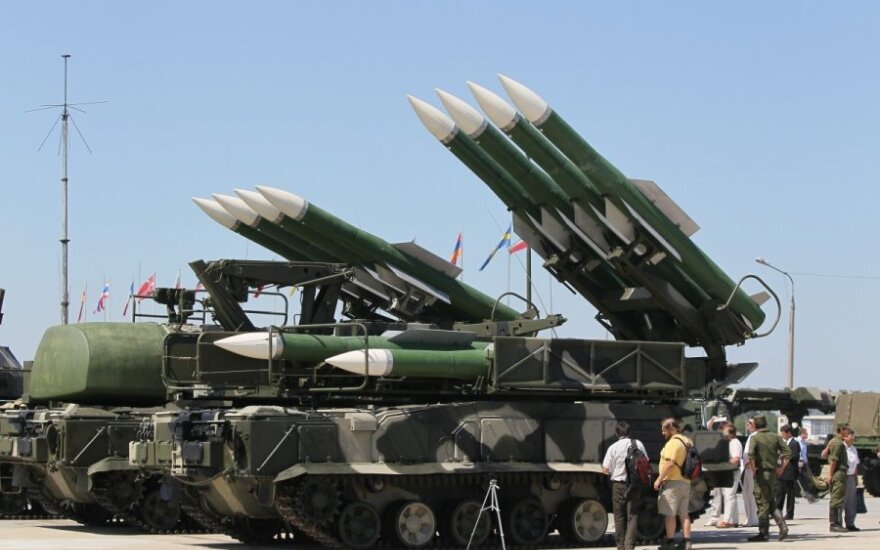 More and more irrefutable proof is emerging that terrorists supported by Russia shot down the Malaysia Airlines passenger plane from territory provisionally controlled by them in eastern Ukraine. They later sought to obscure the evidence of this appalling crime. This evidence was taken to the Russian Federation. On 18 July, at 04.50, secret surveillance units of the Ukrainian Ministry of Internal Affairs tracked “Buk” antiaircraft system being transported on a white Volvo trailer-truck in the direction of the Russian Federation through the town of Krasnodon. Alfa.lt managed to speak to the owner of this trailer-truck.

On 17 July, a Malaysia Airlines passenger plane was shot down over territory in eastern Ukraine provisionally controlled by Russian-supported terrorists. As suspected, the aircraft was shot down by a “Buk” antiaircraft system missile which was launched from deep within the territory provisionally controlled by terrorists. According to information from the Ukrainian State Security Service (SSS) counter intelligence, on 17 July at 01:00 AM the “Buk” antiaircraft missile system was transported from the Russian Federation, in the vicinity of the town of Suchodolsk, into Ukraine. A team of operators accompanied it. On 17 July at 09:00 AM the missile system was moved by the terrorists from Donetsk to Pervomaisk. That same day, following a decision of Igor Bezler, the passenger airliner was shot down.

Igor Bezler, known as “Bez” (Demon – Alfa.lt), is a citizen of the Russian Federation and a military intelligence lieutenant colonel in the reserve of that country and one of the leaders of the terrorist groups of the “Donetsk People’s Republic”. Military specialists from Russia managed the system.

On 18 July at 04:50 AM, secret surveillance units of the Ukrainian Ministry of Internal Affairs tracked a “Buk” antiaircraft system being transported on a white Volvo trailer-truck in the direction of the Russian Federation through the town of Krasnodon. In images secretly filmed by operational units of both the Ukrainian SSS and the Ministry, a Volvo trailer-truck was seen to be transporting the “Buk” system. A well-informed source at Alfa.lt confirmed that the Eastern Intelligence Services managed to establish the origin and movements of the trailer-truck. Alfa.lt managed to contact the owner of this trailer-truck.

Alfa.lt knows this person, the name of his company as well as his position and telephone number. Since his safety is in jeopardy, this information cannot be disclosed at this point. “Don’t publish my last name, I have enough problems as it is”, said Vasily, a fresh witness to this horrific crime. His testimony is extremely important, making the fact indisputable that it was the antiaircraft system that downed the passenger plane and that it was in actual fact in the hands of Kremlin-supported terrorists.

Can you confirm that it was your trailer-truck that was stolen from you and used to transport the “Buk” missile system?

It wasn’t stolen. My base in Donetsk was seized and it (Alfa.lt – the car) was parked there. So it was my vehicle. They came to our base and said that they needed it. They were all gone for eight days and the base stayed under their control, including my equipment, that white vehicle.

When was it seized?

In the video that was taken, was the trailer-truck that was seen transporting the “Buk” missile system to the Russian Federation yours?

Yes, of course. It was easy to identify. We know our vehicles. Yes, it was ours.

Can’t you identify the people who took your property?

As of 8 July my drivers, all of my drivers were sent home and aren’t working. None of my vehicles are here.

Of course. Just one of them is in the Donetsk region, nothing else. Like the Volvo with the driver’s cab.

The United Nations High Commissioner for Human Rights Navi Pillay said on Monday in Geneva that the shooting down of the Malaysia Airlines passenger plane is “a violation of international rights”. He likened the incident to a war crime.

If paraphrasing Dutch folk hero Till Ulenspiegel, the ash of the flight MH17 is "knocking on our...

Eleven days after it crashed, the wreckage of Malaysian Airlines Flight MH17 remains out of reach...