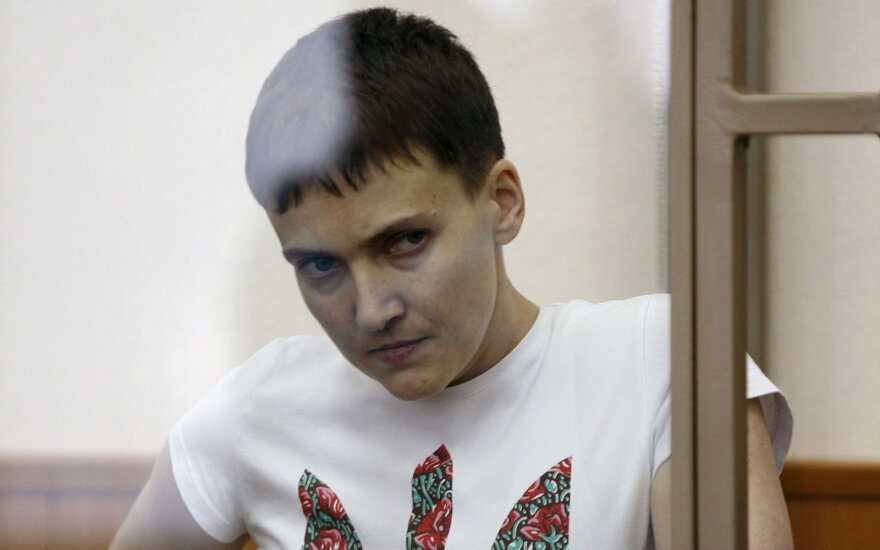 Savchenko, 34, was captured by pro-Moscow rebels in eastern Ukraine in June 2014 during the separatist conflict there and handed over to Russia where she was charged with directing mortar fire which killed two Russian journalists.

A diplomat from the Lithuanian embassy in Moscow had planned to observe the pronouncement, but was not allowed into the courthouse. Marijus Petrušonis says he was told by the security there was not enough space for members of the public, according to BNS.

Lithuania's Foreign Ministry has repeatedly condemned what is says is Savchenko's unlawful detention and imprisonment in the Russian Federation, calling upon the Russian administration and law-enforcement institutions for respect of human rights and immediate and unconditional release of Savchenko and other Ukrainian citizens in unlawful custody in the Russian territory.

Last week, the Lithuanian parliament passed a resolution, expressing support to the initiative of making the so-called Nadiya Savchenko List of Russian officials who would face sanctions for persecution of the Ukrainian pilot. The resolution also emphasizes that Savchenko, 34-year old pilot of the Ukrainian Air Force, is in unlawful detention in Russia, which is a gross violation of the international law.

Savchenko is regarded as a national hero and symbol of anti-Kremlin defiance by many in her native Ukraine. In Russia, state TV has depicted her as a dangerous Ukrainian nationalist with the blood of civilians on her hands.

Judge Leonid Stepanenko, read the sentence saying that the Ukrainian pilot "deliberately inflicted death on two persons, acting by prior conspiracy, and on the motives of hatred and enmity."

Prosecutors have asked the court to sentence her to 23 years in prison. Savchenko hopes she will be returned to Ukraine before too long as part of an exchange deal between Moscow and Kiev and has been on hunger strike to try to speed up the trial and its outcome.

Ukraine has its own Joan of Arc

Lithuania's conservative leader Gabrielius Landsbergis said after the ruling that Vilnius should introduce sanctions on Russian officials who had a hand in capturing Savchenko.

"Let us demonstrate an example of principled stance and become the first country with a Savchenko List – let's bar entry to Lithuania for those who contributed to Nadiya's abduction, unlawful detention and conviction. (...) We call upon the Lithuanian government to initiate the decision," Landsbergis, of the Homeland Union - Lithuanian Christian Democrats, said in a press release.

He dismissed the Russian court's guilty ruling as unlawful, saying that the "pitiable performance to humiliate Ukrainians failed".

"Instead of a humiliation, Ukraine now has its own Joan of Arc, a symbol of freedom and struggle against the Russian imperialism," said the leader of the opposition conservatives.

About 50 people gathered outside the Russian Embassy in Vilnius at noon on Wednesday, calling for...

A Russian court is rejecting almost all requests made by the defence lawyers of Ukrainian pilot...

Savchenko suggests Russia be 'stripped of veto right' at UN

Ukrainian pilot Nadiya Savchenko, who is held in prison in Russia , has urged the international...