BNS
Ukraine expects that the Lithuanians appointed to its government will help the country implement key reforms, Ukraine's Ambassador to Lithuania Valery Zhovtenko said on Monday. 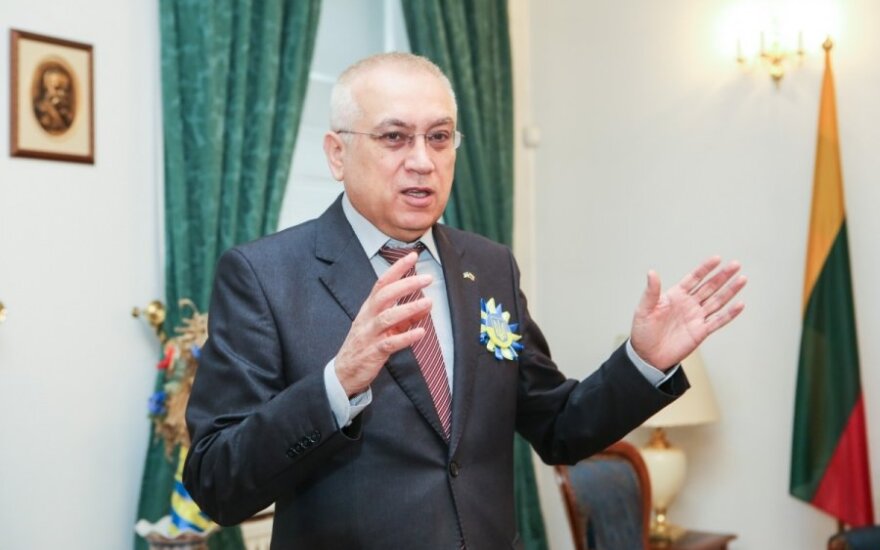 In his presentation of the Ukrainian government's program at the Lithuanian parliament, the diplomat emphasized the plans to strengthen the country's armed forces and the border service, reform the economy and combat corruption.

Zhovtenko said he was sure that the Lithuanians designated to high positions fully realize their responsibilities. Lithuania's former finance minister and EU commissioner Algirdas Šemeta has been appointed anti-corruption ombudsman; Aivaras Abromavičius will head Ukraine's Ministry of Economy; and former presidential adviser Nerijus Udrėnas has been picked to advise the Ukrainian government on the implementation of the association agreement with the EU.

"If we speak about Algirdas Šemeta – he is a European commissioner. If we were to speak about Nerijus Udrėnas – he is a presidential adviser, and Aivaras Abromavičius is a successful businessman who happens to work in the area of attracting investment, which is very important for us. I have no doubts that these people fully understand what they were doing before and understand well the challenges they will face in Ukraine. I believe that, with the help of these people, Lithuania will demonstrate what actual support is," Zhovtenko told Vilnius journalists after presenting the government program.

"When it comes to Abromavičius – he has been living in Ukraine for seven years, so he may know Ukraine better than I do because I don't live there. But the key aspect is his professionalism on one side and his sincere intentions to do something on the other. This is also an opportunity for them – Ukraine is interested in people who want to do something and know how to do this. It is a chance for them to show that they know what to do and that they will put their words into practice rather than just keep talking," said the diplomat.

In the ambassador's words, Ukraine needs very fast and major changes now, and the society is willing to make "social sacrifices" that would allow Ukraine to become a European country fast.

In his presentation of the government program, Zhovtenko said that the objective was to implement the key reforms and become a European country within 4-5 years.

"There is one single focus – reforms in all areas, not just the signing and implementation of the EU association agreement and application of EU standards in all areas, namely, economics, state governance, social affairs and lives of ordinary citizens," he added.

The ambassador also expressed hope that the conflict in eastern Ukraine would be settled in the "political and diplomatic way", noting that the international sanctions on Russia already yielded results.

"I believe that the hot heads of the northern neighbour [i.e., Russia]0 will cool, they will start thinking and make a decision to withdraw their troops from the Ukrainian territory. Abiding by European standards, we will manage everything in our territory ourselves," Zhovtenko told journalists in Vilnius.

Šemeta on fighting corruption in Ukraine: businesses previously had nowhere to turn (1)

Algirdas Šemeta , Lithuania's former European commissioner and finance minister who has been...