Ukraine's ambassador to Vilnius: EU should be on active side of "gas war", not its victim

Sigitas Kazlauskas,
Elta EN
aA
Ukraine will never accept the loss of Crimea. Valery Zhovtenko, Ambassador Extraordinary and Plenipotentiary of Ukraine to Lithuania, said in the exclusive interview to ELTA news agency that only negotiation measures would be used to solve the issue of Crimea. In case it fails, the issue should be taken to international court, whereas the option to use military force is not being considered. 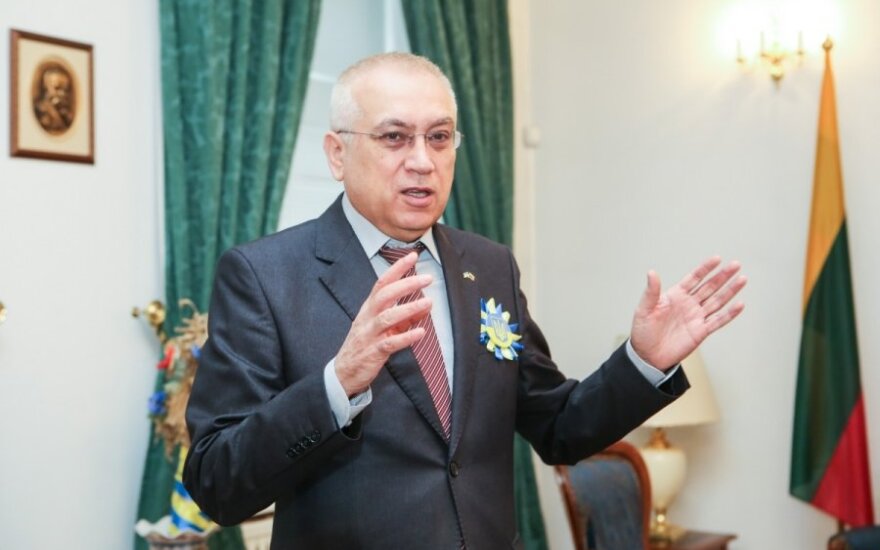 It seemed that the movement of separatists in eastern Ukraine was losing momentum, rebel controlled territory was shrinking, cities of Donetsk, Horlivka are encircled, Luhansk has been almost liberated. How long the military operation in Donbas region might last?

Now, obviously, it is impossible to call completion dates of anti-terrorist operation in the East of Ukraine. The problem is that the actual Ukrainian Armed Forces in the East of Ukraine more and more often fight not just against terrorists, but professional soldiers of the regular Russian Armed Forces. Proof of this has been the detention (in Ukraine - ELTA) and recognition of Russian paratroopers from the 331st Regiment of the 89th Airborne Division of the Russian Armed Forces. And as you already probably know, Russian military openly intruded the territory of Ukraine in the south of Donetsk region near the city of Novoazovsk and in other places.

Are there any fears that after the military operation the security situation in eastern Ukraine may become similar to what we observed in Caucasus after the Chechen wars?

The fundamental difference between the situations you mentioned is that the Chechen revolt dates back to centuries long internal strive of the Chechen people for independence, which has been continually suppressed from the outside. Meanwhile terrorist outburst in Ukraine is instigated from outside by Russia. So, once this foreign invasion is stopped - and the Ukrainian government together with the European Union (EU) and the whole world is urging the Russian Federation to stop its aggression and do it immediately - the process will be put on political rails and will continue within the Ukrainian society, which has been always able to solve its internal problems without weapons and violence

The Ukrainian Government claims it will not reconcile with the annexation of the Crimean peninsula and Western countries seem to have the same opinion on the matter. What measures is Kiev going to use in its efforts to settle the Crimea dispute with Russia? Is Ukrainian military action in Crimea possible?

Ukraine will never reconcile with the annexation of Crimea. The only means to settle the Crimea dispute with Russia from our side are negotiations. If this will not work, the issue should be settled through International Court. Military option is not on the table.

With the help of the EU and with the assistance of the international community we want to build the new European and prospering Ukraine, and all people of the Crimea - Ukrainians, and Russians, and Tatars - all of them will reunite with Ukraine.

How do you assess the support from the EU and NATO to Ukraine in its current confrontation with Russia? What else, in your opinion, these Western blocks could do for the sake of Ukraine's security, independence and integrity?

Today Ukraine being in an undeclared war with Russia has broad political support from the civilised and democratic world, despite the comprehensive cynical and false information campaign that Russia deployed worldwide.

We are grateful to the United States, the European Union, several European countries that joined the EU sanctions, Canada and other states that provide us with the political and economic support in the face of Russian aggression against Ukraine. Special thanks to the Republic of Lithuania, which realizes that Ukraine, defending its territorial integrity, at the same time and protects European values and fights for security in Europe and in the world.

Taking this opportunity, we would like to express our gratitude to the leadership of the Republic of Lithuania and the Lithuanian people for political, financial, technical, expert and moral support that so is widely provided to Ukraine.

In connection with the invasion of the Russian armies into Ukraine, we expect more strict position of the European Union and NATO. In addition to political and financial support Ukraine urgently needs the military-technical assistance from our partners. We also look forward to strengthening sanctions against Russia.

The second part of the Association Agreement with the EU was signed in June but despite the calls by some of the Verkhovna Rada members, this document has not been ratified yet. Is it feasible to ratify the agreement in September, after the European Choice coalition collapsed in Parliament?

The European integration policy is a core direction of the policy of the Ukrainian state. As President of Ukraine Petro Poroshenko said, we will not refuse the European vector of Ukraine under any circumstances. Chairman of the Verkhovna Rada of Ukraine Oleksandr Turchynov during his visit to Lithuania on 18-19 August expressed his confidence that the Association Agreement between Ukraine and the EU will be ratified in September.

The collapse of the parliamentary coalition and the president's decision of 25 August to dissolve the Verkhovna Rada of Ukraine will not prevent the full implementation of the supreme legislative body of Ukraine of its functions. In accordance with the Article 90 of the Constitution of Ukraine, the current composition of the Verkhovna Rada will use its power until the new Parliament of Ukraine is elected in October. The key objective of the current Ukrainian Parliament is just to ratify the Association Agreement in September.

At the end of July the parliamentary coalition collapsed, not so long ago Minister of Economic Development and Trade Pavlo Sheremeta announced his resignation, the Verkhovna Rada itself was dissolved. Maybe the scenario after the "Orange Revolution" is repeating itself in a bit different manner?

Obviously not. I mean your question about the possibility of repetition of the scenario after the "Orange Revolution". Coalition disorder in the Ukrainian Parliament is a natural political reflection of public opinion. The Ukrainian society demands updating of Parliament which was elected in 2012 and after the events on the Maidan no longer conforms to political requirements of the people. Therefore on 25 August President Poroshenko made the decision on dissolve the Parliament and declared early parliamentary elections, which will take place on 26 October.

President Poroshenko promised major political, economical and social reforms during his election campaign. How successful is the president in implementing his promises? What will be included in the reform package, promised to be delivered in September?

The president is fulfilling all the promises, which he gave to Ukrainians during his election campaign. In political sphere he promised to guarantee the development of parliamentary-presidential form of government and to hold parliamentary elections at the end of 2014. As I already said, the president has dissolved the Ukrainian Parliament and set the date of the extraordinary parliamentary elections to 26 October 2014. Poroshenko also supports decentralisation of the governance system and expansion of powers of local authorities.

In economic field it is planned to take a number of measures, aimed at creation of competitive economic environment in Ukraine, counteracting monopolies and corruption, facilitating business environment as well as simplifying export conditions for Ukrainian goods and services to foreign markets. For example, the Ukrainian Government plans in the nearest future to cut the number of taxes from 22 to 9, to halve the number of supervisory bodies, which control business activity, etc. Despite the fact of recent dismissal of the Ukrainian Parliament, it must operate until new one is elected and should adopt all the laws necessary for political end economic reforms.

Testing of the reverse gas delivery system was launched recently, but it is estimated that supply of natural gas from Slovakia will only suffice about half of Ukraine's needs. What is being done to settle the gas dispute with Russia's Gazprom? Is Europe in danger of becoming a victim of another "gas war" between Moscow and Kiev?

Since 16 June, when Gazprom stopped gas supply to Ukraine, Russia lost the main lever of economic pressure on Ukraine. Although supplying gas from Slovakia begins only on 1 September, the volume of gas in the Ukrainian underground gas storage did not decrease, but is considerably increased - from 13.3 to 15.3 billion cubic metres in the last two months.

Today Ukraine has an opportunity to import gas from Europe via Poland, Hungary and Slovakia. Besides, we have own gas fields, we extract 20 billion cubic metres and more per year. One more important way to diversify gas supply is the project of LNG-terminal near Odessa, which can be constructed in 9-12 months.

Ukraine does not agree to pay a political price for Russian gas and will resolve this problem in the international arbitration court. The "gas war" between Russia and Ukraine was renewed again at the beginning of this year after Maidan when the Ukrainian people chose the European future for their country. That is why Europe should be on the active side of this battle, but not a victim. And in this situation Ukraine counts on the European Union support.

Oleksandr Turchynov, Chairman of the Verkhovna Rada, visited Lithuania recently. Are there any plans for other high-ranking Ukrainian politicians to visit Lithuania soon?

Since 2008 Ukraine-Lithuania relations acquired a strategic character. Ukraine and Lithuania maintain an active political dialogue and cooperation at all levels - from presidential to experts'. By the end of this year we also expect the visit of Ukraine's Foreign Minister Pavlo Klimkin to Lithuania, as well as visits of Lithuanian President Grybauskaitė and Prime Minister Algirdas Butkevičius to Ukraine.

The Lithuanian leadership and the Lithuanian people courageously and openly help the Ukrainian people who defends the freedom and independence in fight against the Russian aggression. We highly appreciate strong support of Lithuania and our real friendly relations which have centuries of history since the Grand Duchy of Lithuania.

A C-27J Spartan of the Lithuanian Air Force is scheduled to leave Lithuania on Tuesday to transport...

Russian invasion in Ukraine: The Kremlin has revealed its cards (1)

Russia 's armed forces invaded Ukraine from the coast of the Sea of Azov for a reason - in order...

Aggression in Ukraine: what consequences await its architects?

In the first article about Dmitry Rogozin’s clan , I discussed how this clan developed and gained...