BNS EN
aA
Ukraine is ready not only for the so-called Crimean corridor scenario, but also for much larger-scale military action by pro-Russian separatists in its territory, General Viktor Muzhenko, the chief of the general staff of Ukraine's Armed Forces, said. 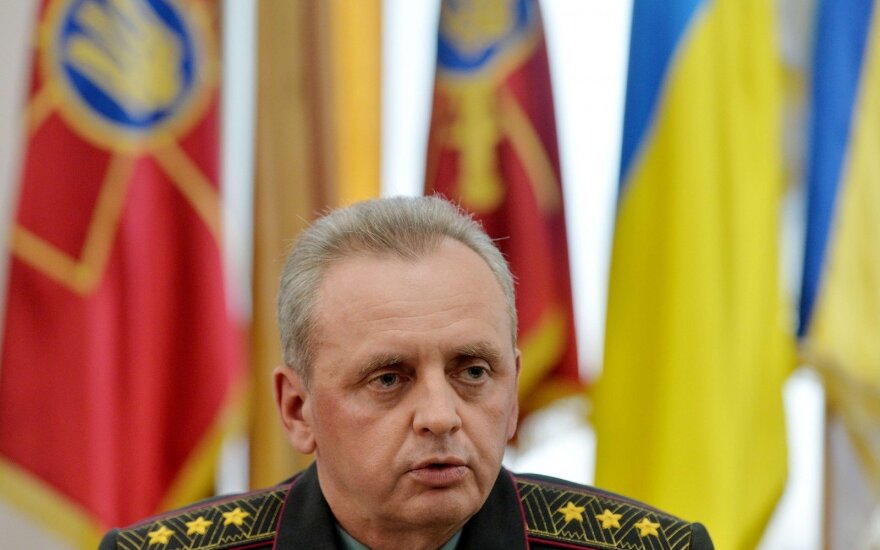 "We are considering possible scenarios from escalation of the conflict in the southeast of Ukraine to large-scale aggression in the rest of Ukraine's territory. Countermeasures are being worked out under this scenario," Muzhenko, on a visit to Vilnius, said in an interview with BNS.

The chief of the general staff said that his nation is grateful to Lithuania for its support in supplying the so-called lethal weaponry and military advice to Ukraine in the creation of special operations forces and he mentioned possible government contracts on repairing Lithuania's weapons systems in Ukraine.

"First of all, we expect continuous support, because Ukraine needs this support so as to understand -- and we do understand -- that we are not alone in this struggle, in this confrontation," Muzhenko said.

"Yesterday we discussed issues of further cooperation and, again, we put the main focus on special operations forces, instructors, professional training of the non-commissioned corps. Certain positions relating to inventory, including weapons, were also discussed" the general said.

"Cooperation will be mutual, because our industry can repair the systems that are currently available to Lithuania's Armed Forces. This is one of promising directions for our mutually beneficial cooperation," he said.

Muzhenko says that he does not see any indications that the administration of US President-elect Donald Trump might change course and stop aid to Ukraine.

The general noted that the US is providing support, estimated at around 500 million US dollars, for Ukraine to help reform its Armed Forces to conform to NATO standards.

"From what we know from our communication with the US military, no changes are in sight, at least for now. This is both regarding advisors in the training of instructors and regarding financial aid, decisions on which have already been taken. We do not have any signals today that would suggest otherwise," he said.

Ukraine is planning to create civilian paramilitary and volunteer military forces on the model of...