BNS
aA
Withstanding Russia's aggression, Ukraine is not only defending itself but is also defending the whole of Europe, therefore, the West should provide necessary military assistance, Oleksandr Turchynov, chairman of Ukraine's Verkhovna Rada, said in Lithuania on Monday. 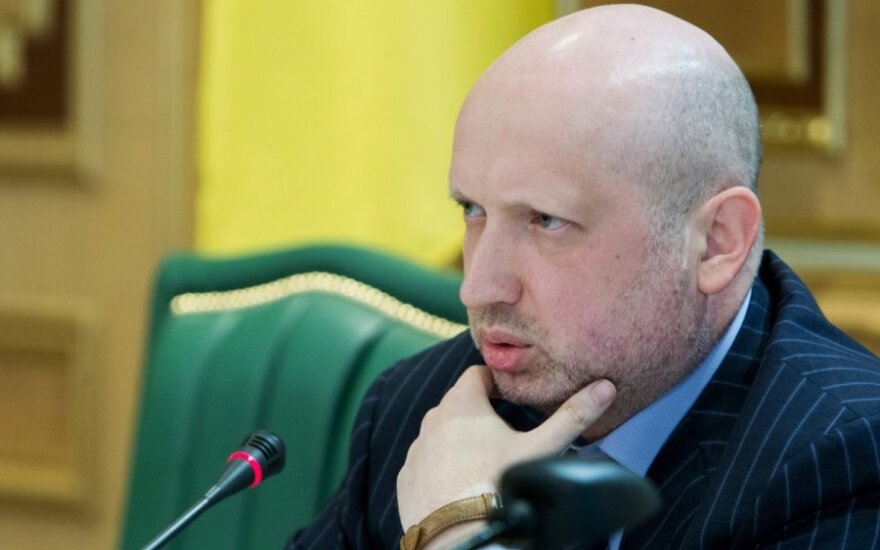 "In my opinion, all major countries, first of all, strategic partners, should stick to a very clear position that aggression is taking place and we must withstand it with force. In this case, with military technical force. And we need assistance," he said in an interview with BNS.

"We are grateful to the Nordic and Baltic countries for their support. I would like to thank the people of Lithuania, Lithuania's government who from the very first day, starting with the Maidan, have supported us. We've seen your sincere support. It's a trusted friendship that has brought our nations closer.

"At the moment, Ukraine is in special need of support and unity of forces to be able to withstand aggression for peace to be restored on the continent.

"I would also like my colleagues to hear that the Ukrainian nation has made its historic choice and it has chosen Euro-Atlantic integration.

"The Ukrainian parliament will soon ratify the association agreement with the European Union. And no aggression, including that of Russia, will not stop us from taking this historic path."

What the European Union and Lithuania have not done for Ukraine?

We are grateful for united political support and the wave of new sanctions against Russia. But Russia's aggression against Ukraine is a challenge not only for our country, for the Ukrainian nation, it's Russia's attempt to redraw state borders after WWII, it's an attempt to destroy all peace-ensuring international mechanisms created by civilized countries.

The Russian army technically surpasses our army in many areas. Ukrainian patriots are ready to defend their country and we do that every day, we are withstanding aggression of a rather dangerous enemy. Therefore, we need real military technical assistance.

In this case, nothing has been done, except for several hundred bullet-proof vests and helmets provided. We need modern weapons, aviation and air-defense equipment.

In my opinion, all major countries, first of all, strategic partners, should stick to a very clear position that aggression is taking place and we must withstand it with force. In this case, with military technical force. And we need assistance.

Why are you not receiving this assistance?

My experience as acting president shows that, nevertheless, many state leaders are afraid of Russia's aggression. They hope to resolve everything peacefully. But we know from history, we know how WWII started. From attempts to reach peaceful agreement with the aggressor. The existing situation is very similar. The same territorial annexation, the same attempt to reach peaceful agreement with the aggressor by making certain concessions. Ukraine is ready to defend its territory and peace in Europe.

Do you think Europe is not fully aware of the threat Russia poses?

I think it's not. It seems to me that they are not fully aware of that military threat and attempts to break the existing peace and order. They think they can call it a local conflict, and they also believe that Russia can be talked into, convinced to change the situation. And blood is being shed in our country every day, Ukrainians die every day, we see the aggression and cynicism of the Russian army.

Ukraine is amending its legal basis to match European standards. Ukraine will also impose all sanctions that the European Union and the United States have imposed against Russia. We have amended the legal basis so that we could impose the same sanctions together with all civilized countries.

Speaking about the energy problem, the Ukrainian parliament made a very important decision last week and amended the gas transportation rules. We created conditions for Western investors to enter the Ukrainian gas transportation system for it to become a joint issue, and Russia would not be able to blackmail Ukraine with threats to stop gas supplies to Ukraine.

We believe the purchase of gas on the Russian and not Ukrainian border would guarantee gas supplies to Europe. And common use of the gas transit system would increase its effectiveness and would not allow Gazprom to speculate and blackmail Ukraine and Europe.

How could you explain what happened to the Malaysian plane in eastern Ukraine?

There's clear evidence that it involved Russia. Not only the plane was shot down using the Russian Buk missile system which is quite complex and cannot be used by non-military, only Russian specialists, i.e. Russian army, could operate it. But the shot was fired from a territory under control of separatists.

It is evident not only from the video footage and photos, but also from separatists' conversations when they say they shot a Ukrainian plane.

Quite a number of Ukrainian planes have been shot down using Buk and other Russian military systems. As you know, the Malaysian plane was flying over the territories controlled by separatists. It was likely to have been shot down by someone who knew what plane they were targeting. Therefore, it's an international act of terror. International terrorism is now part of Russia's foreign policy.

Do you think Ukraine could become an EU member?

Speaking about our prospects, we have in mind both European integration and Euro-Atlantic integration. I believe Ukraine has to not only be an EU member but also a NATO member. It would be a strong guarantee against Russia's future intentions. We realize it cannot be achieved in a day. We have a five-year plan. We believe Ukraine can get ready to become a full EU member state in five years.

Do people in Ukraine support the country's NATO aspiration?

After Russia's aggression the situation has changed. Today the majority of Ukrainians realize that Euro-Atlantic integration is a real prospect that will help to protect the country's future from Russia's aggressive policy and provocations. If earlier people were divided in their opinion, Russia's actions have changed it, including that in the country's eastern regions.

Do you think Ukraine will manage to recover Crimea?

Of course. There's no other way. It's very important that people's mood is changing. There are a lot of Russian-speakers in Crimea and eastern Ukraine. They were deceived by Russian propaganda. Russia was preparing for Crimea's occupation for a long time. People hoped the Russians would feed them, the level of investment would go up and living conditions would improve. They were promised that. Now they realize they have lost a lot. First of all, they lost the opportunity to live in a free and democratic country.

You say Russia and Ukraine are waging war. But why then did Ukraine agree to accept humanitarian aid from the attacking country?

We did not allow the so-called humanitarian aid in. We believe it's Russia's provocation as it's a useless cargo. Just imagine, a lot of it contains water. We don’t have problems with water. A lot of it contains salt. There's the city of Artemivsk in the Donetsk region, and it produces salt not only for Ukraine but also for Europe. We did not allow this cargo to enter Ukraine, it is going through the part of the border controlled by terrorists. The Red Cross is taking care of the cargo, it informed Ukraine and we were just put before the fact.

Ukraine plans to hold early general elections? When could they take place? Is it possible to hold such elections in a country waging war?

One of the Maidan's tasks was a total government reshuffle. When we were resisting Yanukovych's regime, the decision was made not only on early presidential but also early general elections. Of course, it's difficult to hold them under such conditions. On the other hand, a total government reshuffle is a task that needs to be done. The president will make the decision. He will get the right on the eve of the Independence Day on Aug. 24.

Do you think Ukraine can feel safe having such a neighbor like Russia?

In my opinion, it will feel safe being an EU and NATO member. Then Russia will stop dreaming of once again having some sort of post-Soviet empire including Ukraine as well. That will not happen. Ukraine is already capable of defending itself. And when we become a full member of civilized Europe, then a stop will be put to Putin's dreams. If he still is in any power position at that time.

Turchynov: Ukraine will be ready to join EU in five years

Ukraine should be ready for full EU membership within five years, Oleksandr Turchynov , chairman of...

Lithuania's seaside resort Palanga will host the annual Conference of the Parliament Speakers of the...

There's a basis for the European Union 's sanctions against Russia and the EU is united on the...

Russia continues escalating the ongoing conflict in eastern Ukraine while shifting focus to the...