(1)
BNS
aA
United States President Donald Trump used the visit of the three Baltic presidents for domestic politics, however, Lithuania, Latvia and Estonia managed to align their interests with those of the White House, political scientists say. 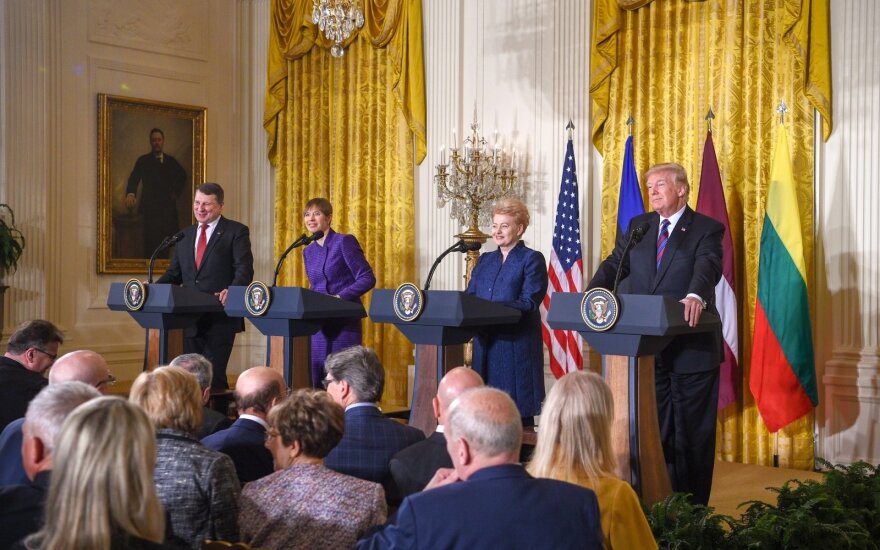 "As usual, the US president used the meeting with the Baltic leaders for the objectives of his domestic policy agenda, accentuating that the Baltic states earmark enough money for defense and (…) a potential in selling energy resources," Ramūnas Vilpišauskas, director of the Vilnius University's International Relations and Political Science Institute, told BNS on Wednesday.

After meeting with the presidents of Lithuania, Latvia and Estonia in Washington D.C. on Tuesday, Trump urged other NATO members to follow their example.

All three Baltic nations earmark 2 percent of their gross domestic products (GDP) to defense, as prescribed in NATO documents. Many other European countries fall behind the Baltic nations in terms of this indicator.

The US president also emphasized the future growth of US liquefied natural gas (LNG) exports, specifying the Baltic Sea region as one of the potential markets.

However, reviewer Kęstutis Girnius said that many other statement by Trump were stock phrases, which indicates his limited interest in the Baltic states.

In a declaration signed by the four presidents on Tuesday, the United States pledged periodic deployment of forces in the Baltic states to deter Russia.

Girnius said the content of the declaration and the news conference demonstrated that no specific agreements had been reached.

In the declaration, the US restated its "ironclad commitment to Article 5 of the Washington Treaty," which consolidates the principle of collective defense.

"On one hand, it may seem strange that Article 5 is mentioned in such agreements 14 years after the accession to NATO, as this should go without saying. However, looking at the context of the US presidential election campaign and Trump's statements, the words contained in the declaration and pronounced by Trump at the news conference should restate the US commitments," said Vilpišauskas, the director of the VU International Relations and Political Science Institute.

NATO fighter-jets scrambled once from Lithuania over Russian aircraft