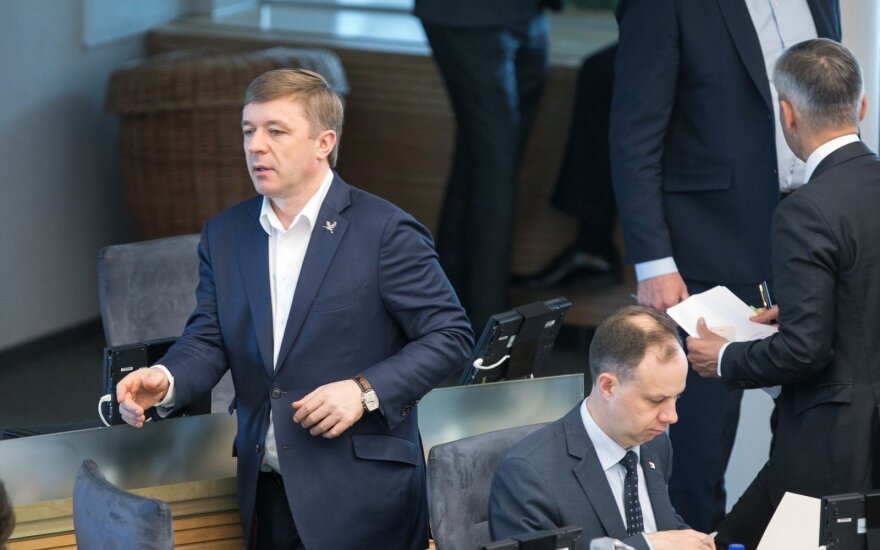 The wealthiest member of the Lithuanian Seimas is Lithuanian Farmers and Greens Union (LVŽS) leader Ramūnas Karbauskis, who has wealth worth 14.7 million euro. However the parliament also has members who have zero wealth in total.

Based on State Tax Inspectorate (VMI) income declaration data for 2016, most of R. Karbauskis', who leads the Seimas Committee of Culture, wealth is made up of stocks, valued at 9.8 million euro. He owns land for 3.2 million euro and buildings worth 1.1 million euro.

The second wealthiest is Liberal Movement representative Kęstutis Glaveckas – he is separated from R. Karbauskis tenfold, with K. Glaveckas' wealth totalling 1.4 million euro. Most of his property is based on real estate, valued at 848 thousand euro and land plots worth 144.5 thousand euro. The politician also has state obligations worth 249 thousand euro and holds 112 thousand euro banked, while not having any loans.

In third place is Homeland Union – Lithuanian Christian Democrats (TS-LKD) representative Tadas Langaitis. His property is worth 1.2 million euro. Most of this is in stocks, valued for 600 thousand euro.

T. Langaitis also has 44.5 thousand euro in bank savings and another 78 thousand euro in loans. The politician has also declared one of the largest loaned sums among his peers – 1.2 million euro.

Order and Justice Seimas group members Kęstutis Bartkevičius and Kęstutis Pūkas, "farmer" Kęstutis Mažeika and conservative Kazys Starkevičius all are valued at over half a million euro.

A completely different situation can be found among members of Seimas who had not accumulated wealth prior to being elected. There are three politicians in Seimas who declared having no wealth in 2016. These are Liberal Movement representative Aušrinė Armonaitė and LVŽS group members Rūta Miliūtė and Robertas Šarknickas.

Seimas Committee of Healthcare chairwoman, LVŽS representative Agnė Širinskienė declared property worth 3800 euro. This is declared as being a transport vehicle worth 3500 euro. The politician also holds another 3.5 thousand euro banked and has a loan of 3800 euro.

Seimas vice Speaker, "farmer" Arvydas Nekrošius has a little more – 11 thousand euro, all of it being monetary savings, but he has no loans.

Political party List of Lithuania affiliated economist Aušra Maldeikienė, who won in the Žirmūnai electoral district, declared wealth worth 13 thousand euro. Most of this is in artwork and jewellery (10 thousand euro), with 3100 euro in savings. The politician also declared a 16 thousand euro loan.

Former member of the Šiauliai University Senate, Arūnas Gumuliauskas, who entered Seimas with the LVŽS, has wealth worth 18.5 thousand euro, this being his real estate. The politician declared no savings.

Greta Kildišienė, who represented the LVŽS, was also among those with the least wealth. The member of Seimas relinquished her mandate in early 2017 due to a scandal due to her links with R. Karbauskis' Agrokoncernas, as well as due to a former investigation over potential misappropriation of wealth from her former workplace.

Based on VMI data, G. Kildišienė's wealth is valued at 20 thousand euro, this being monetary savings.

Transport Minister Rokas Masiulis ' family is the wealthiest among the families of Lithuanian...

In power not so long ago – where do former politicians work now?