Ludo Segers | the Lithuania Tribune, Corporate Client article
aA
Lithuania has come a long way from being one of the most hazardous road environments in the EU. Road fatalities have decreased substantially over the last 10 years. However, there is still a lot of room for improvement. Education and enforcement contribute to overall safety. The main factors to achieve safe roads are road design and reshaping human behaviour. Particularly speed, alcohol and risky driving styles contribute to road fatalities, no surprises. 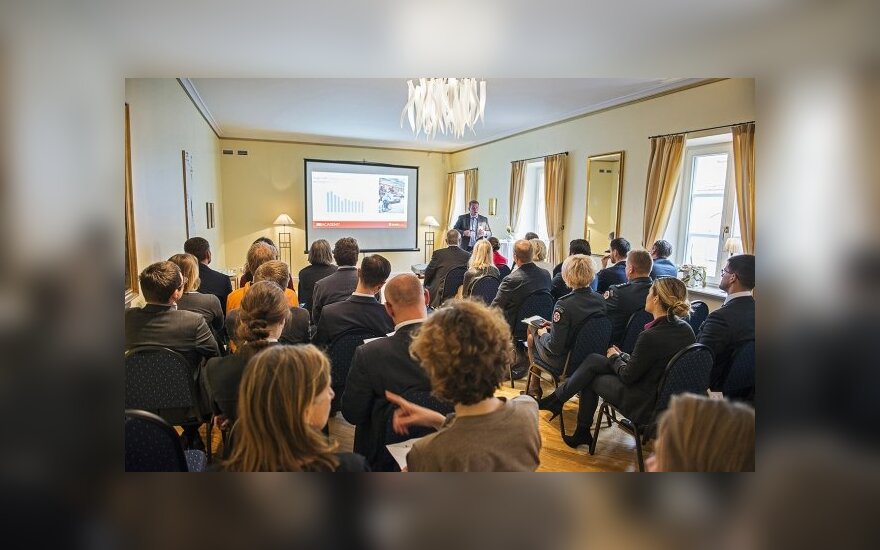 These were the main points presented during a seminar "Vision Zero for Road Safety in Lithuania'' organised by the Embassy of Sweden in Vilnius in partnership with the Lithuanian-Swedish Academy and Lithuanian Ministry of Transport and Communications at the Swedish Embassy in Vilnius. . In her welcome word the Swedish Ambassador, HE Maria Christina Lundqvist stated that road safety was one of the areas where Sweden and Lithuania can share experiences and learn from each other. ''Road safety involving children and adults alike is an important area where this embassy wants to make a contribution.'' Ambassador Lundqvist added, ''Children safety, be it bullying or abuse, are important to any society.''

Peje Michaelson, Director of the Lithuanian-Swedish Academy welcomed the participants and experts to this well attended seminar in Vilnius. The first presenter was Matts-Åke Belin who has since 1990 devoted his career to road safety issues in Sweden. He showed how various measures and actions have contributed to a continuous decline in road fatalities on Swedish roads, nearly halving it from 500 deaths in 2006 to about 250 in 2016.

Human factors are one of the main issues in addressing safety. Sonja Forward a researcher with the Swedish National Road and Transport Research Institute (VTI) divided behavioural factors into those of 'failing to act' or lapses in human behaviour and 'violations'. Better road design and infrastructure, and safer cars have contributed a lot dealing with lapses and inadequate reaction. However, risk taking and violating traffic rules, particularly, speeding, are often to blame for accidents, including fatal ones. Risk takers often overestimate their driving skills, whilst underestimating risk.

Professor Andras Varhlyi, of the Faculty of Engineering at Lund University in Sweden addressed road infrastructure, including the improvements to deal with the 'black spot' as key contributors to safety. Having road designed for the right urban or rural environment and paying attention to adjusted speed limits reduces accidents. Professor Varhlyi cited proper speed adaptation with 30km/h in zones with pedestrians and 100km/h or more in zones with no impact as desirable speed limits.

Peter Larsson, a Senior Advisor with the Swedish Transport Administration added to Professor's Varhlyi presentation showing how road design can take the limitations and capabilities of drivers into consideration whilst building and designing road.

Jenny Engvall, the Lithuanian country manager of Scania gave an insight into new life-saving features incorporated in all new trucks during recent years. Driver safety courses either provided in-house or by external driving academies have also contributed to safety records. Intuitively one can understand defensive driving contributing to safer roads. Ms Engvall said, ''We have discovered that drivers that drive in an efficient way (fuel saving), are also the safest drivers.''

Viktoras Lapinas of the Lithuanian Road Administration added the Lithuanian point of view to the road safety presentations. He showed the dramatic decrease in Lithuanian road fatalities, with a suggestion that there is still a lot for improvement. Education and infrastructure are important factors contributing to safer roads. He demonstrated that the right design of roundabouts, safety islands and speed reducers in previously known problem areas has led to a decline of deadly road accidents by 80 to 90%. Through advertising campaigns the Lithuanian transport authorities target also drivers over 60, in particular, with awareness campaigns about drinking and driving
Mr Lapinas added that 'average speed measuring' is coming to Lithuania in combination with other monitoring devices and an increased numbers of fixed and mobile safety cameras to catch speeders. All these actions and infrastructure measures will hopefully bring Lithuania closer to a zero road fatality objective.

Over 20 traffic violation control and monitoring systems should be installed on Lithuania's main road...

Opinion:Political Correctness - a road to hell paved with good intentions (4)

A year ago, when Islamist radicals shot and killed eight members of Charlie Hebdo ’s editorial...

On Tuesday 28 November the Embassy of Sweden in Vilnius in cooperation with the Presidential Palace...

The overall scale of shadow economy in Lithuania is on the decline amid an improving economic...

Lithuania's police is taking unconventional measures to reduce the number of deaths on the country's...