The tip of the Ukraine iceberg: After the Dutch EU referendum

Maxim Vikhrov, Carnegie Moscow Center
aA
Despite Kiev’s official rhetoric, the national consensus on integration with the EU is increasingly fragile. Pro-Russian forces are reasserting themselves in the southeast, while ultra-right activists are campaigning against the European Union in the west. On top of that, the current pro-European government has no real achievements to boast of. 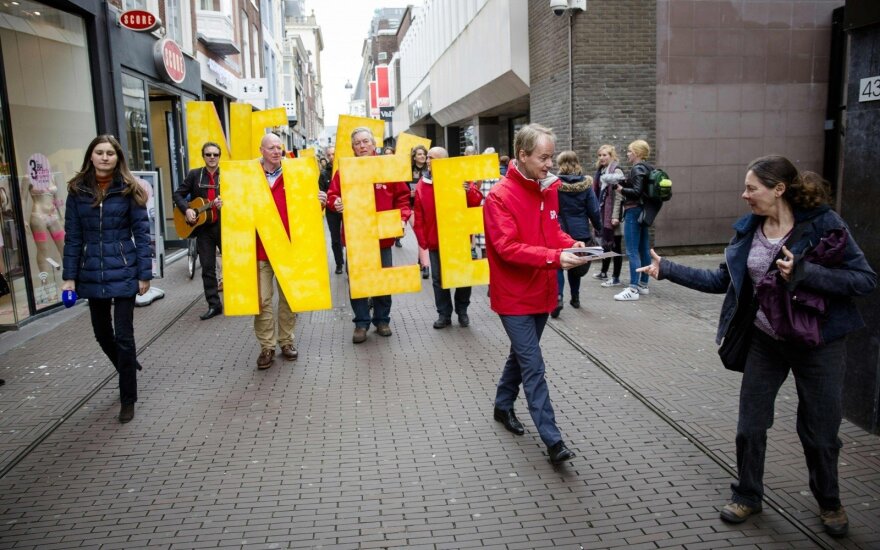 When the Dutch people voted against ratifying Ukraine’s Association Agreement with the EU on April 6, Kiev saw the referendum as a demarche by Euroskeptics challenging European unity. But within Ukraine itself, there is no agreement on a future foreign policy trajectory. Just over half of Ukrainians support integration with the EU, but their number is waning. With a political crisis looming, Ukrainian Euroskeptics are preparing to return to mainstream politics, and it will soon become much harder for Kiev to maintain a course toward integration with the EU.

Ukraine’s southeast is the traditional stronghold for the country’s Euroskeptics. Supporters of integration with the EU are a minority there, albeit a sizable one—about 40 percent in the southern regions and less than 30 percent in the eastern regions (not including the separatist republics of the Donbas). Local Euroskepticism is rooted in the region’s traditional pro-Russian orientation: about 30 percent of the population in the southeast still favor integration with Russia.

The majority in the southeast pin their hopes for economic revival on maintaining close relations with Russia and other CIS countries. Furthermore, continued friendship with Russia is seen as a guarantee of future high political status within Ukraine for the southeastern regions—a status that the pro-EU forces are seen as encroaching on. This is why Euromaidan—in which hundreds of thousands of Ukrainians took to the streets in favor of integration with the EU, eventually toppling the government—spurred the local elites and many local residents to look to Russia for protection.

The first attempts by former Party of Regions members to return to mainstream politics were not very successful. Their Opposition Bloc, which avoids pro-Russian rhetoric but argues that to repair Ukraine’s economy, the country must suspend integration with the EU and develop cooperation with the BRICS countries, was trounced in the presidential elections in May 2014, and received only 29 seats out of 450 in the parliamentary elections in October of the same year.

Now, however, the government’s falling approval ratings are working in favor of the Euroskeptics in eastern Ukraine. The Opposition Bloc already has a higher rating (12.8 percent) than both parties of the ruling coalition combined—the Petro Poroshenko Bloc (9.7 percent) and the National Front of Arseniy Yatsenyuk (2.9 percent)—and is in third place overall, just behind Samopomich (Self-Reliance, 15.6 percent) and Yulia Tymoshenko’s Batkivshchyna (Fatherland, 14.0 percent). Furthermore, in the local elections of October 2015, the Opposition Bloc secured a majority in a number of southern and eastern local assemblies. If early parliamentary elections were held, the Opposition Bloc could become one of the main forces in parliament.

Supporters of integration with the EU in western and central Ukraine make up a solid majority—about 80 percent and 60 percent, respectively—but traditions of Euroskepticism exist there, too. Unlike their southeastern counterparts, western and central Euroskeptics are Ukrainian nationalists who cite as threats an influx of migrants, Islamization, legalization of same-sex marriage, and loss of national sovereignty.

Ukrainian ultra-rightists reject any form of cooperation with Russia, and insist on seeking a third way. The Svoboda (Freedom) party campaigns for a Baltic-Black Sea union and the restoration of the Georgia, Ukraine, Azerbaijan, and Moldova (GUAM) organization. Right Sector advocates forming a broad alliance of Eastern European states stretching from Estonia to Albania.

During the Maidan uprising, the nationalists and the liberal opposition joined forces, but their alliance ended as soon as former president Viktor Yanukovych was deposed in February 2014. Following a poor showing in the parliamentary elections, the ultra-rightists focused on the war, but the disbanding of voluntary battalions prompted them to return to politics, dusting off their old slogans and accusing the EU of trying to impose “foreign values” on Ukraine.

Similar slogans, along with anti-Russian rhetoric, propelled Svoboda into parliament in 2012. After a fiasco in the 2014 parliamentary elections, Svoboda started rising in the polls again, and it has almost caught up with the Petro Poroshenko Bloc.

Over the past year, the number of Ukrainians who oppose both integration with the EU and rapprochement with Russia has risen from 14 percent to 23 percent, and this, along with disillusionment with the post-Maidan regime among older conservatives and radicalized youths, could boost the rightist Euroskeptics’ numbers. The nationalists look set to return to parliament following the next elections.

The position of the Euro-optimists is increasingly vulnerable. Their expectations of integration with the EU are clear and simple: higher quality of life, freedom of movement throughout Western Europe, better access to European education, and acceleration of reforms within Ukraine. However, there has been very little progress on any of these fronts since Ukraine signed the Association Agreement in 2014.

For various reasons, living standards in Ukraine have plummeted, public confidence in the government of the pro-European reformers is tanking, and the introduction of visa-free travel has been postponed repeatedly. The prospect of full EU membership is getting more and more remote: European Commission President Jean-Claude Juncker has cited a timeline of 20−25 years.

All this means that, despite Kiev’s official rhetoric, the national consensus on integration with the EU is increasingly fragile. If existing trends in Ukrainian politics continue, the Euro-optimists might lose their majority, which would make it difficult for Kiev to maintain its pro-Western course. And sooner or later, the separatist regions of the Donbas will rejoin Ukraine’s political sphere, which will further strengthen the positions of the Euroskeptics.

The government has two years before the next presidential and parliamentary elections, after which it is difficult to predict what the political landscape might look like. The pro-European groups might find themselves weaker than they were following Maidan. Ukraine will most likely stay on the same foreign policy trajectory, but its pace might slow down substantially or even come to a standstill.

Dutch unease: Why the Netherlands turned away from Ukraine (1)

The Dutch didn’t reject the EU’s Association Agreement with Ukraine because they are sympathetic...

A referendum vote in the Netherlands on whether or not the country should support an EU partnership...