The search for new ministers begins. Farmers not looking among their own

Media Briefing
aA
Eugenijus Jovaiša, Mindaugas Puidokas, Robertas Šarknickas and Kęstutis Mažeika are “Farmer” group members, whose names are, according to lrt.lt sources, brought up among the potential candidates to the recently freed minister positions. The “Farmer” leaders do not reveal yet, what candidacies are being discussed and only emphasise that Prime Minister Saulius Skvernelis will continue to form the cabinet out of professionals, not from colleagues working in Seimas, lrt.lt writes. 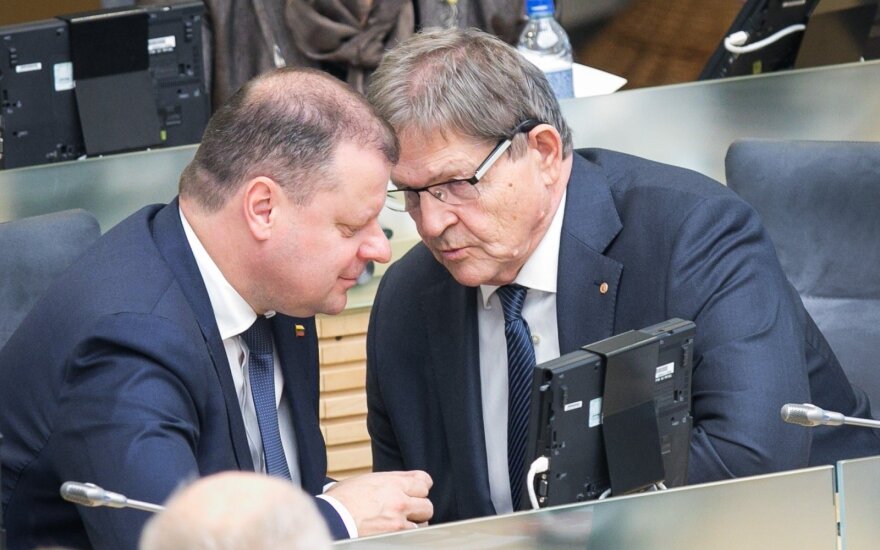 With S. Skvernelis declaring the dismissal of three ministers, the Minister of Environment Kęstutis Navickas, Minister of Education and Science Jurgita Petrauskienė, as well as minister of culture Liana Ruokytė-Jonsson on Monday, lrt.lt sources say that discussions have begun among the "Farmers" on potential replacements.

The sources note that potential candidates to the post of minister of education and science are "Farmer" group members, Seimas Committee on Education and Science chairman Eugenijus Jovaiša and Mindaugas Puidokas. In terms of minister of culture, the name of Culture Committee member Robertas Šarknickas is brought up, while for minister of the environment, talks revolve around "Farmer" Kęstutis Mažeika or a representative of coalition partners, the Social Democratic Labour Party.

R. Baškienė: the ministers should not be MPs

"Farmer" leader Ramūnas Karbauskis stated on Monday's LRT show LRT Forumas that new ministers will likely not be sought among MPs, instead seeking professionals in the respective areas. "Farmer" veteran and Seimas vice Speaker Rima Baškienė concurs, pointing out that the workload of being both an MP and minister is massive.

Meanwhile, the head of coalition partners, Social Democrat Labour, Gediminas Kirkilas did not conceal when talking to lrt.lt that the idea of a professionals cabinet is unacceptable to him. He expresses support for a political cabinet and points to the various replaced ministers as proof of the idea being flawed. Nevertheless, he concedes that if professionals, who handle the political arena well, are found, there would be no issue.

The veteran MP stated that his Seimas group has not received any requests from the "Farmers" for minister candidates, but G. Kirkilas stated he was ready to help, if called upon.

On Monday, Prime Minister Saulius Skvernelis and R. Karbauskis mentioned that the Electoral Action of Poles in Lithuania – Christian Families Union might be offered to join the coalition. This political power could also propose candidates to the minister posts.

The ruling Lithuanian Farmers and Greens Union Seimas group has called upon Minister of Social...

On Tuesday, the Electoral Action of Poles in Lithuania – Christian Families Union (LLRA-KŠS)...

E. Gentvilas on Skvernelis’ move: with one more minister removed, he would run for president as a victim

By firing three of his cabinet ministers, Prime Minister Saulius Skvernelis has won some time to try...