The realization your grandfather may have murdered thousands of Jews

(1)
JP O’Malley, The Times of Israel
aA
"There is always someone in a family who pushes against silence," says Rita Gabis, in whose new book Lithuania’s Holocaust skeletons come to light, exploring the 220,000 Lithuanian Jews killed during WWII — and the people who let it happen.
Sekite svarbiausias naujienas socialiniuose tinkluose! 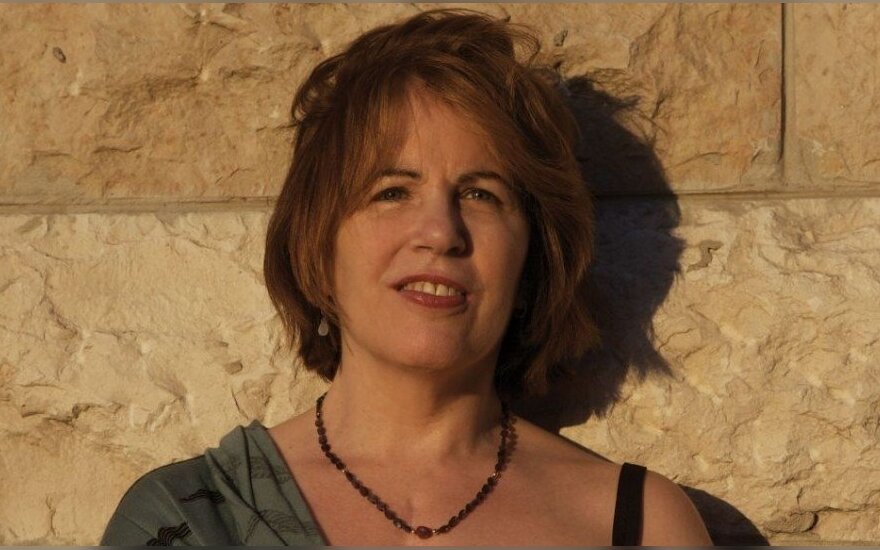 Author Rita Gabis was born to a Lithuanian Catholic mother, and a Jewish father. (Photo Rina Castelnuovo, The Times of Israel)

Five years ago, Rita Gabis, a poet and teacher based in New York, discovered a family secret: from 1941 to 1943 her grandfather had been the chief of security police under the Gestapo in the Lithuanian town of Švenčionys. The town was located near the killing fields of Poligon, where 8,000 Jews were murdered over three days in the autumn of 1941.

Backed up by an impressive amount of scholarly research and interviews with family members, war crimes investigators, Holocaust victims and numerous historians, Gabis, who comes from an interfaith family of Eastern European Jews and Lithuanian Catholics, has recently published a book that attempts to unveil this culture of silence in Lithuania’s dark history. Her work, part memoir, part history, is an incredibly honest and moving account of searching for the truth at all costs, even at the expense of breaking familial loyalties.

“There is always someone in a family who pushes against silence,” Gabis explains when we begin chatting. “And in my family, I have been that person.”

Gabis says writing the book “A Guest at the Shooters’ Banquet: My Grandfather’s SS Past, My Jewish Family, A Search for the Truth” gave her an opportunity to think long and hard about her own family history, while also giving her the opportunity to ask several questions about human morality. The narrative is an interesting mix of daily journalistic diary entries, memoir and painstaking family soul-searching.

Gabis has a remarkable nose for research too, producing the required forensic documents and scholarly analysis needed to back up the emotional responses to her own grandfather’s alleged complicity in the mass murder of Lithuanian Jews. In fact, Gabis triple-sourced almost all details surrounding the alleged crimes by her grandfather. In this part of the book, she essentially puts him on trial herself.

The results Gabis obtained, she says, allowed her to draw her own conclusions, rather than arriving at any definitive answers as such. She learned, for instance, that her grandfather was one of the escorting officers who took victims to their mass-execution site during the notorious Poligon massacre.

Did he pull the trigger himself? Was he simply orchestrating the logistics needed to carry out mass murder? 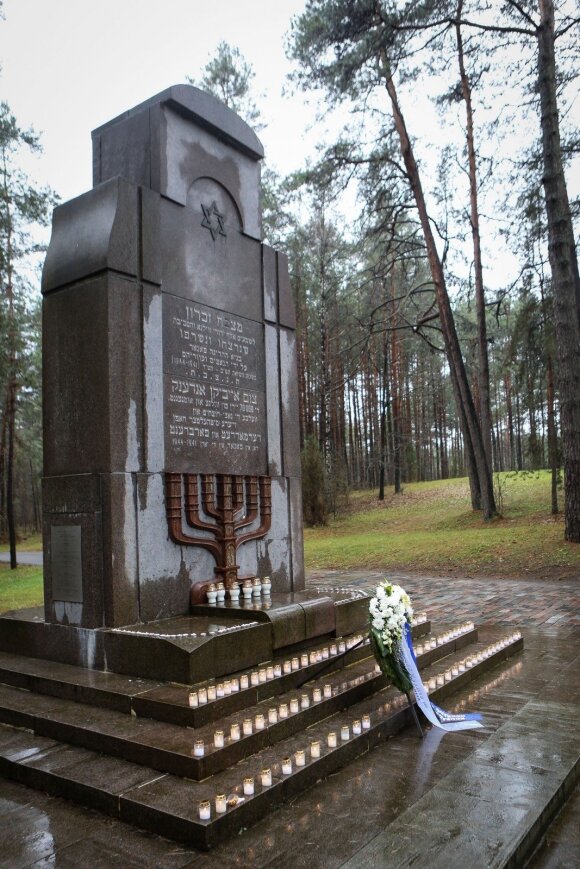 “I don’t know,” Gabis answers, “but the documentation and witnesses show that he was at the place where the massacre happened.”

So how did prodding through such distressing historical family evidence play out with Gabis’s mother, who is still alive today ?

“It was very hard,” Gabis admits. “I love my mother. And writing this book, I have in some ways dismantled the myth of her father. It was very painful for her. But ultimately, she embraced the book, which is remarkable.”

‘All the stereotypical notions of vile anti-Semitism’

Grasping a firm sense of her own mixed identity was a strange concept for Gabis growing up. Her father was Jewish, while her mother came from a Catholic background. She did attend mass on Catholic holidays. Likewise, she celebrated Jewish holidays with her father’s family too.

Gabis recalls how this conflicting sense of identity troubled her during childhood; her grandparents on both sides fought to implement their own sense of culture and identity on her at all times.

Her grandmother on her father’s side once ripped off a cross from her neck, explaining furiously that Jews don’t wear such things, while her grandfather on her mother’s side — the main character of this book — once told her not to be like her father. He insisted that “Jews were no good.”

“My grandfather had all the stereotypical notions of vile anti-Semitism,” Gabis admits.

Gabis says like many anti-Semites of his generation, her maternal grandfather conflated communism with Judaism, firmly buying into the mythology of the Bolshevik Jew.

Technically, during the war, Gabis’s grandfather was working for a Lithuanian police administration that was under the rule of the SS. However, he was not in the SS himself, she makes clear.

But just how far-reaching did his Nazi sympathies go? Was he simply a careerist who was happy to blindly follow orders from the Germans for his own personal gain?

“He didn’t think about Nazi ideology deeply,” Gabis insists. “But nor was he just a bureaucrat either.”

Collaboration offers both opportunity and risk, Gabis believes, and sometimes, she says, it was done with a gun pointing at someone’s head. But often it wasn’t.

‘There are so many place of mass murder in Lithuania’

Perhaps one of the most impressive attributes of Gabis’s haunting narrative is her ability to poetically recreate the various sites across Lithuania where these massacres against Jews took place.

Describing the road to Poligon, for instance, Gabis writes: “Ahead of us thin, scrawny pines cluster; farther in, alders rise, sweet briar already in bloom.” 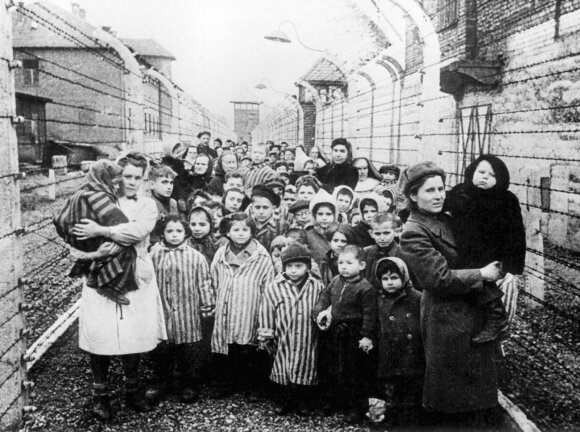 Next to these picturesque descriptions of idyllic landscape, Gabis then tends to philosophize on the page and simultaneously think out loud about history. “There are so many place of mass murder in Lithuania,” she writes.

Gabis speaks about the warmth of the Lithuanian people, who have a proud cultural tradition that seems to be more genuine than most places in Europe. But also about the eerie silences that seem particularly prevalent when one begins to journey far out into the heartland of the Lithuania countryside, beyond the populated towns and cities.

It can almost feel as if ghosts from the 1940s are haunting you in these isolated locations.

She nods her head in agreement.

“The whole experience of visiting Lithuania was very profound,” Gabis responds, after a rather long pause. “I remember being in Vilnius, and walking through the Jewish quarter. There was this tremendous sense of absence, like the soul of the place had simply vanished.”

“It feels as if something is missing,” she adds. “Now we can’t turn the clock back, but historical consciousness can expand to acknowledge the death of that loss.”

In the medieval Grand Duchy of Lithuania and the early modern Polish-Lithuanian Commonwealth, Jews settled in Vilnius, Lithuania’s capital city, in vast numbers. Jewish culture became so influential in the metropolis that it even earned the nickname “the Jerusalem of Lithuania” under a regime that granted Jews local autonomy and gave them the ability to prosper.

By the 19th century Vilnius had become home to the Haskalah — otherwise known as the Jewish Enlightenment — and had long been a hub of Jewish scholarship, producing some of the most renowned Talmudic commentaries still studied today.

In June 1940, Lithuania lost its independence to the Soviets. The following year, the Nazis “liberated” Lithuania from Soviet control, and within a month, the Reichskommissariat Ostland — the German Civil Administration — was established in the country. The result was social chaos. By the end of the German occupation in 1945, 96 percent of the Jewish population — about 220,000 people — was wiped out. Many of the murders were carried out locally, with the majority of the killers being Lithuanians themselves.

Why the sudden switch to mass murder?

Historical evidence shows that the Nazis had no trouble finding Lithuanians willing to murder Jews. But what’s most haunting about this sudden switch to mass murder — in a dramatically short amount of time — is that such ethnic violence had no precedent in prewar Lithuanian policy, or indeed at any stage of historical Lithuanian-Jewish relations.

Wartime testimonies today also point out that, just like in Poland — where collaboration was a common theme too during the Holocaust — all class distinctions within Lithuanian society voluntarily participated in the persecution and murder of Jews. This included members of the clergy, the intelligentsia, doctors, teachers, even down to the poorest and most marginal groups.

The Soviet occupation which followed the war — lasting up until 1991, when Lithuania once again regained its independence — has tended to overshadow a proper public discussion about the Holocaust in the country’s national public discourse.

This evaporation of Jewish culture isn’t just in Lithuania though, Gabis points out — as if to reiterate what seems like a fairly obvious point about modern European history, but one that is worth stating out loud nevertheless.

“It’s across a lot of Eastern Europe,” she says. “You go out to the countryside in these places and you feel like time has stopped. There are people missing. And music, literature, language and culture have vanished from these towns and villages. There is something very desolate about this.”

When nationalism supersedes ‘the richness of identity’

In her book, Gabis writes that nationalism “slices away and eviscerates the richness of identity.”

“If what we are looking for is purity of identity, then we fail from the get go,” says Gabis, rather philosophically. “Because, within a culture, and a society, diversity is the greatest strength; it’s the groundswell from which a society creates and recreates itself, with ever-expanding opportunity.”

In order for the ideology of nationalism to work successfully, Gabis says a country has to create a history that conforms to a myth that embraces purity going centuries back.

“Within that narrative you lose complexity and texture, and the opportunity to be challenged or to grow,” she argues.

Republished with permission from The Times of Israel

Over €125,000 euros have been raised in a charity concert organized by the Lithuanian Jewish...

People like anniversaries, and 75 years since the establishment of Kaunas Ghetto is a good opportunity...

Latvia 's parliament has approved a new law that will see properties confiscated from Jews during...