The opinions of Skvernelis and Karbauskis have separated dramatically 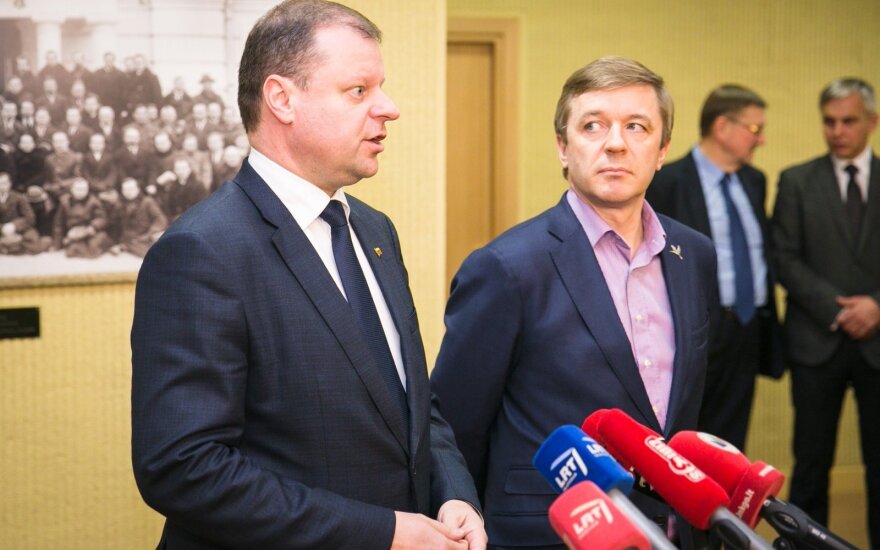 The Prime Ministers Saulius Skvernelis and the leaders of Farmers and Greens Ramūnas Karbauskis opinions has yet again differed radically. For example the Prime Minister does not think that the national agreement regarding putting a break would be useful. However, R. Karbauskis stated that S. Skvernelis has no idea what he is talking about.

“Maybe the Prime Minister dis not have enough information because he did not know that it is not an agreement amongst parties but a national one where the whole society needs to be involved in” said R. Karbauskis.

S. Skvernelis states that no political agreement will change the situation because only actions can make a difference. He gave an example: there were numerous discussions among political parties regarding the increase of financing for defence up to 2 per cent from the GDP but the situation changed only when Russia attacked Ukraine.

“When the time came to actually act, no agreement was needed” stated the Prime Minister.

S. Skvernelis thinks that he can already give himself a plus

On Tuesday the Parliament discussed regarding migration and demographic politics. Prime Minister himself has expressed his opinion.

“We probably cannot think about full stop on emigration and that has been mentioned by the International Migration Organisation numerous times. It would be easy to adopt a law and physically prevent people from leaving. However, we understand that that is the past and I do hope that it will never become a reality here” stated the Prime Minister.

According to the politician we should reduce the number of emigration until we reach normal.
“We cannot talk that short term emigration is based on studies, the wish to get experience, realise themselves is not useful. That is needed but we need to drastically reduce the number of emigration and create the conditions for them to return. This Government has a different vision: we won’t stop emigration with working groups, new departments or Ministries. That won’t stop those who leave and we won’t encourage others to come back with new strategies or actions. The issue with emigration is that we can’t take it as a separate issue. This is a horizontal challenge which trickles down to other areas” said S. Skvernelis.

According to the Prime Minister, emigration is encouraged by economic motives, social separation, the lack of social security which stems from the culture of western employment, the lack of justice and an environment that is not favourable to family.

S. Skvernelis questioned: who could help in this situation? He answered and mentioned his own reform ideas: from the encouragement of birth rates to the reforms in education.

Also, h thinks that he has already done one of the steps and has managed to reach an agreement between employees and employers about the new Labour code.

However, he emphasizes what is useful: Tripartite council did reach an agreement about the Work code but in a lot of cases, the opinions of employers and employees differ. You can find what has and has not been agreed upon.

“With this agreement, the employers and employees will no longer face double standards, which encourages inequality, disappointment in dysfunctional state security. The parliament has to respect the agreement reached by the Tripartite council and reach a project which was agreed on” said S. Skvernelis.

The Prime Minister emphasized that by stopping emigration and trying to stop people from leaving Lithuania the important things are education system and its reform. He promised to suggest to return for the ones who have left but do lack competency.

Disagreement: who will be the lead?

Despite good intentions, stopping emigration alongside other questions will go to the fight between the Government and Parliament. It could be sensed during the discussion at the Parliament: Guoda Burokienė, the representative of Farmers and Greens, stated that the Parliament should take the lead while representing the political group.

“All things involving emigration should be coordinated not by the governing power but the state’s political power – Parliament as the representative of people” said B. Brokienė.

The member of the Parliament also state that it is not adequate to talk about stopping emigration by only increasing the wages. She thinks that people are lowered to only working power and their price.

In her opinion, the feeling of injustice alongside with protecting the rights of the strong, corruption, cynicism, selfishness of the government and bureaucrats, their arrogance, lack of empathy and losing touch with society are effecting emigration.

Ramūnas Karbauskis , the leader of the Lithuanian Farmers and Green Union (LFGU), has played down...

Enforcement of Lithuania's new Labour Code liberalizing the labor relations will not be postponed...