The Kremlin's view: why Baltic countries now pose a threat to Russia

Vaidas Saldžiūnas
Parašyti
autoriui
aA
Russian propagandists were not long ago deriding the inability of Baltic States to defend themselves but are now seeing something different: a threat to Russia. 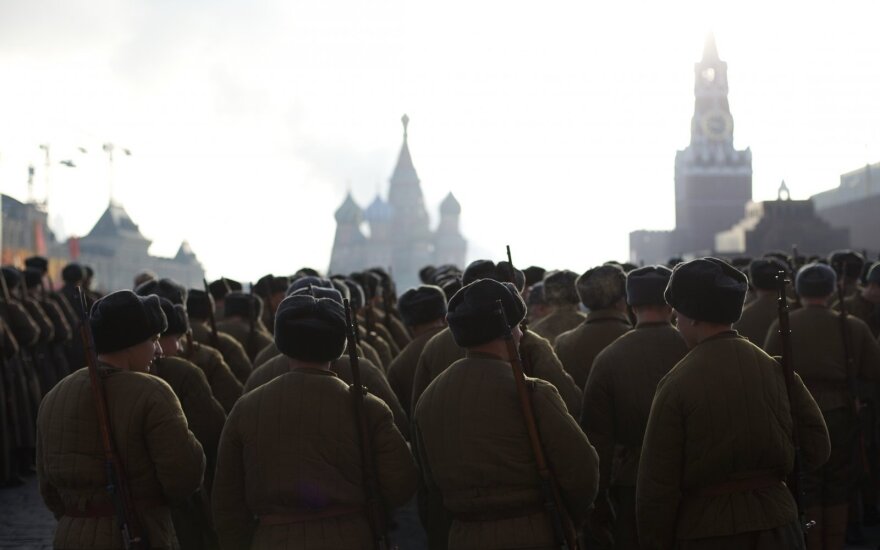 With help from their NATO allies, Lithuania, Latvia and Estonia have significantly strengthened their defensive capabilities and with plans to build those capabilities even further, are worrying Kremlin analysts. That strengthening, the Kremlin's mouthpieces claim, are really preparations to attack Russia.

Moscow supporters have always expressed seemingly contradictory views about Russia's security: Kremlin propagandists often laud the awesome power of the Russian military, that is "unmatched in the world", arguing it was superior to any military force that the West could offer with an unmatched ability to destroy adversaries. At the same time, they insist that Western military bases, weapons and other forces are encircling Russia, posing an existential threat to the country and (why be modest?) to world peace.

This latter view dominated when the Baltic States were pursuing membership of NATO. Russia made no secret of its opposition, and kept invoking allegedly violated agreements and broken promises, all the while making threats of retaliation and while showing off its military might.

At the same time, however, Moscow's champions consistently belittled the Baltic States: Lithuania, Latvia and Estonia, they'd say, were small and useless countries that neither NATO nor Russia cared much about. The Baltic armed forces, the Kremlin's propagandists insisted, were useless, incapable of withstanding fierce and glorious Russian troops. 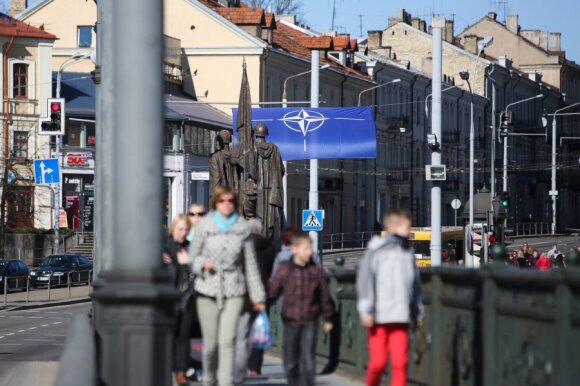 Not even the disastrous wars in Chechnya diminished this arrogance, while the 2008 war with Georgia - just as small but better-armed - only confirmed the supposed glory of Russian military might. True, losses in Georgia were a sobering wake-up call for the Russian army leadership - which then initiated a massive military reform which concluded its second stage last year.

Still, the Baltic States remained inconsequential footnotes in this narrative of Russian military greatness until recently, when hints of fear started to be felt in Kremlin circles.

After the events in Crimea and Russia's aggression against Ukraine, the Baltic States took tangible steps to beef up their defence. Lithuania, for example, renewed military conscription, and significantly increased defence spending, setting aside millions of euro to procure better arms, from anti-aircraft and anti-tank systems to armoured vehicles and self-propelled howitzers.

In itself, the small scale of these moves, especially if measured against Russia's military spending, could hardly be threatening to the Kremlin. However, Russia has never made secret of its annoyance about the deployment of NATO and American troops in the Baltic territories - which is exactly what happened in the wake of the Ukraine war. The United States has now deployed a full company of troops and equipment in Lithuania, Latvia and Estonia.

This annoyance has also registered in Russia's official policies - its new National Security Strategy identifies the expansion of US and NATO forces as threats. The Kremlin has been particularly vocal in opposing the anti-missile defence shield, developed by the US and later NATO, parts of which are deployed closer to Russia's borders, in Romania and Poland.

"This feeds into the official political rhetoric which has been coming from the Kremlin these last few years. Enemies must be unambiguously pointed out for Russian society, since without them, how else to explain the economic hardship and military fortifications. Hence the answer to the classical Russian question: who is to blame? The US and NATO are to blame," said political scientist Tomas Janeliūnas of Vilnius University.

Even countries more distant from Russia’s borders can come into Moscow's crosshairs. Russia reacted strongly to NATO's recent membership invitation to Montenegro, even though this small nation by the Adriatic Sea is situated 1,000 kilometres from Russia. But this rhetoric is in line with its traditional "we're surrounded by enemies" outlook. 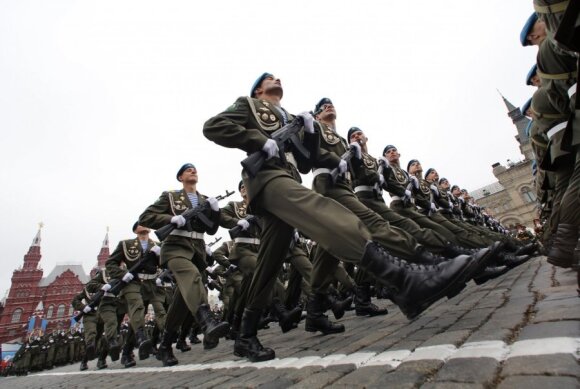 However, still seen as the "near abroad" in Russia, the Baltic States and the growing NATO presence there are Moscow's main concern. It is not a coincidence that the Kremlin's propagandists focus has shifted to Lithuania, Latvia and Estonia and have been developed the concept of the Baltics States as NATO's offensive wing.

The well-known Russian military analyst Mikhail Khodaryonok presented his scenario of how Russia could be attacked 12 years ago. According to this scenario, NATO would use the first five minutes after the attack to paralyse Russia's civil and military governance and "take out the nuclear sting".

Then a Blitzkrieg would follow, leaving Russians no chance of withstanding NATO's technological superiority. There would be no frontlines, no strategic operations, no bombing. Everything would be decided in a coordinated flash attack.

The Kaliningrad Defence District would be eliminated within two days while Belarus would last just a little longer. Khodaryonok visualized this scenario through a map, showing NATO's attack on Russia being directed through the Baltic States and Poland.

NATO has also had its fair share of warnings about the Russian threat, especially lately. There's a wealth of analytical pieces and studies that take Russia's threat to the Baltic States very seriously.

In his latest article, Viacheslav Samoilov, a pro-Kremlin analyst based in Latvia, also argues that Lithuania, Latvia and Estonia are the countries that could be used to target Russia.

"The Baltic countries are a convenient base to attack Saint Petersburg, Smolensk and Moscow, cutting Russian forces off from Belarus and Kaliningrad. It is a region with significant Russian-speaking populations and a real possibility of ethnic conflicts. It is a region where NATO has been concentrating its forces for two years,” he wrote.

"Granted, these forces are insignificant - which is why optimists in Russia are mocking those who panic. What could these several hundred NATO troops, eight patrol jets and a few rusty tanks possibly do, they say.

"But we have to seriously think about it, because armies can appear where there are now just a few units of American troops. Moreover, with regular rotation of forces in the region, the Alliance is perfecting its logistics - and soon there will stand warehouses with equipment," Samoilov warns his Russian readers.

The Russian blogger also insists that NATO is sending much more forces to the Baltics than it officially admits.

"Railcars of military equipment keep moving towards Russia, I have lost count. They used to transport them at nights, but now during days, too - shamelessly, through the central station,” Samoilov wrote.

"What are they preparing for?" he asks, rhetorically, before giving the answer that is becoming increasingly popular: the Baltic States will allegedly be turned into the base for war with Russia. And the reason for this, Samoilov argues, is the possible uprising of local Russian-speaking populations for which Lithuania, Latvia and Estonia are actively preparing.

Eventually, in the minds of Kremlin propagandists, the clash with NATO has become near-inevitable after Turkey downed its aircraft last November. For the first time, Russia, which is used to constantly violating the airspace of other countries, had its plane shot down by the air forces of a NATO country.

There are no sensible reasons why NATO, a common defence alliance, should attack Russia, a nuclear nation, from the Baltic territories, but that does little to stop the myth that NATO represents a threat to Russia.

"The Baltic states and Poland are seen as the offensive wing of the Western anti-Russian coalition. As territories used to deploy arms, to transport missiles, moor military ships closer to Moscow. Whatever happens, all these territories and these countries are and will be treated as hostile," Alexei Venediktov, editor of Ekho Moskvy radio, told DELFI. 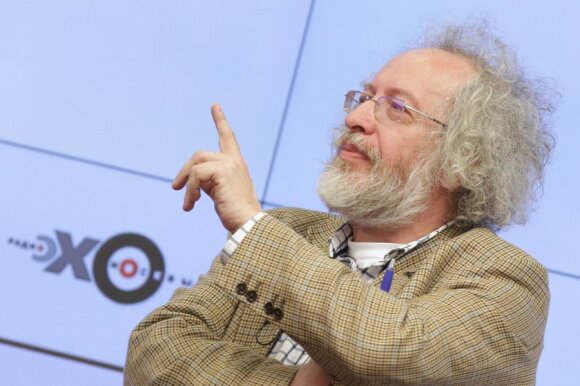 Russia is not convinced by NATO officials, analysts and high-ranking officers saying the opposite: that NATO would face serious problems if it had to defend the Baltic States from Russia's military aggression. There are not enough tools, manpower or even will to deploy truly consequential military forces in the Baltics. Right now, they say NATO is largely developing defensive, not offensive, forces.

Such moves by NATO are a sensible response to Russia's own increasingly aggressive concentration of military power near the Baltic borders, Janeliūnas said. But that makes little difference.
"That's what propaganda does: conceals the part of information that does not suit the message," he said.

Unlike NATO's alleged threat, the Kremlin's aggression is very real: over the last year, the power of Russia's direct military action was experienced by both Georgia and Ukraine.

Military action against these countries was accompanied by powerful information and propaganda campaigns, much like the one unleashed against "fascist" Baltic countries that allegedly oppress Russian-speakers.

And the way Russia deals with these threats - imagined or real - is often clear from real actions and intimations. For instance, the operation of "defending" people of South Ossetia and Abkhazia from "Georgian aggression", during which Russia tore off the territories from Georgia, was cynically called an "inducement to make peace".

In Ukraine, Russia occupied Crimea, justifying it with the threat of "fascists in Kiev". What could Moscow do to a country which, according to Russia's national security strategy document, hosts a US biological weapon laboratory? This is what Russia's foreign ministry said about Georgia, where the US was allegedly developing biological weapons, last summer. Moscow would only need to point a finger at the United States, which invaded Iraq in search of weapons of mass destruction, and follow suit.

Therefore one cannot be sure if Russia might be building the threat narrative as a justification for planned provocations in the Baltic States, Janeliūnas believes. Where military power is concentrated, there is always a higher likelihood of military incidents - sometimes deliberately provoked, sometimes accidental.

Alexei Venediktov , the editor-in-chief of Echo Moskvy , spoke to Delfi about the threat of...

Alexei Venediktov , the editor-in-chief of the Echo Moskvy radio station in Russia, spoke to Delfi...