BNS EN
aA
Someone wants to u se the Lithuanian Labour Party of mutual struggles, says the party's honorary chairman Viktor Uspaskich who has been sentenced for bookkeeping fraud. 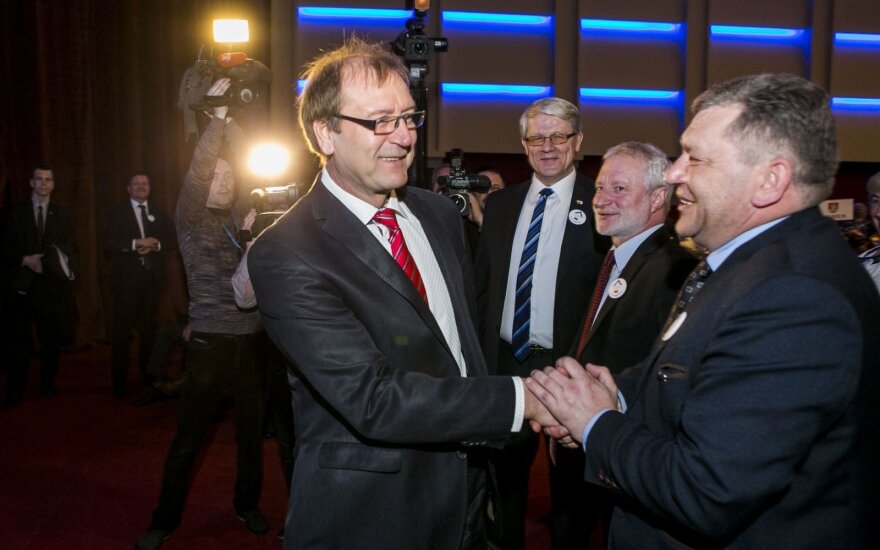 He spoke in comment to the latest probe into influence peddling.

"The investigation is conducted in connection to the prosecutor, not the Labour Party. (…) There are some suspicions, however, not about the Labour Party. Someone is yet again trying to use it for mutual battles," Uspaskich told BNS on Thursday, adding it was BNS who told him about the probe. He said he had not heard the name of the detained prosecutor.

"I have never heard the name of (of prosecutor Rita Aliukonienė), she was not involved in our case. (…) It is difficult for me to comment. The court ruling is final and not subject to appeals. I do not know what games they're playing and who wants to vacate some positions," said Uspaskich.

The party's former leader, MEP Valentinas Mazuronis, said an agreement was made during his leadership of the party not to inquire about the course of the investigation to prevent suspicions of possible influence.

"At the time when I was the Labour Party's chairman, I as the leader held the position that courts should hand down one verdict or another, and we, as a political force, should not interfere, we should not even comment, etc.," he told BNS.

He refused to elaborate on whether somebody could have acted behind his back.

Earlier on Thursday, the Prosecutor General's Office said that the ongoing investigation about Rita Aliukonienė, the chief prosecutor of the First Division of Criminal Prosecution at the Vilnius Regional Prosecutor's Office, had to do with hearings of the Labor Party's case in the Supreme Court.

Martynas Jovaiša, chief prosecutor of the Organized Crime and Corruption Investigation Department at the Prosecutor General's Office, told reporters that suspicions of large-scale influence peddling would be brought against Aliukonienė later in the day. Chairman of the Supreme Court's panel of judges, Viktoras Aidukas, was questioned in the probe as a special witness.

The Labour Party's case including appeals was heard in the Supreme Court by a panel of seven judges in three hearings, ruling that the party should stand charges in the bookkeeping fraud trial regardless of changing its structure before the verdict was handed down by the court of first instance.

The Supreme Court also ruled that the Labour Party's founder, Uspaskich, its former leader Vytautas Gapšys and former financial officer Marina Liutkevičienė had been legitimately convicted of bookkeeping fraud. They were imposed fines. The court also upheld the Court of Appeals' ruling to clear them off the charges of fraud.

The Lithuanian Supreme Court on Thursday concluded hearings in the Labour Party's fraudulent...